Kale is so pretty and inviting, but everytime that I try it (except once) I find that it's much too bitter for my taste.  On the other hand, I love chips of all kinds and have recently noticed an influx of kale chips on the market.  Hmm, quite the conondrum.  I had psyched myself up to buy a bag and try it, but who wants to pay $7.99 for something they most likely won't like?  And then it occurred to me that I could just buy a fresh bunch for less than $1.00 and try to make my own. 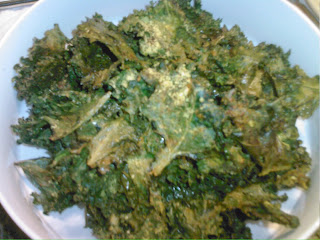 So, I watched a video on how to de-stem kale and set to work.  Looks easy in the video, right?  Of course it didn't work out exactly like that in my kitchen.  But, nonetheless, the final results were so good that even my green vegetable-eschewing omni Dad liked it.

After googling a bunch of very similar recipes I wound up doing this: 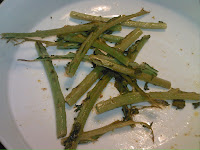 FYI, I also cooked the stems.  They took a bit longer, but also had a very nice taste and satisfactory crunch.

I still don't like pears, though.
Posted by Abby Bean at 1:07 PM