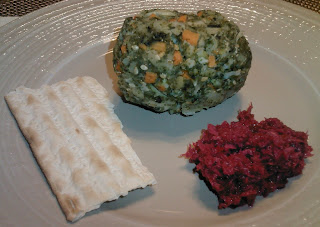 As a kid, even though I ate things like hot dogs and bologna, I would not go near gefilte fish.  There really isn't anything appetizing about those non-descript, beige lumps- especially when they're suspended within gelatinous goo.  The odor is no picnic either, but in my house it's superseded by the pleasantly tear-inducing scent of horseradish.  I usually spend the gefilte fish course of the seder trying to come up with an idea of what I could use as a vehicle to get some of that tangy horseradish into my mouth.

This year I found such a vehicle in Debra Mazer's recipe for Raw Vegan Gefilte "Wish", found via GirlieGirl Army.

I did make a few adjustments to the recipe:

I had no idea what to expect when I began preparation, so I halved the recipe. I would suggest that you remedy my error by doubling yours; everyone is sure to want seconds- including you.  I, of course, served my "Wishes" with horseradish, but I will note that they have such an unexpectedly pleasant taste that you probably won't want to overpower it with much. 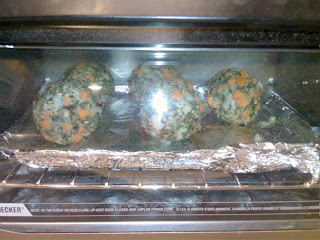 It's hard to describe the overall flavor of the wishes and, even though I had prepared them, eating them whole you cannot pinpoint most of the varied ingredients.  Fear not, "they taste nothing like gefilte fish" (spoken by my omni guinea pig as he gobbled them up); instead, simply a tastier, animal friendly substitution.  The carrots add the most discernable flavor and crunch, the almond dough-- while not identifiable-- offers an overwhelmingly pleasant texture, and the kelp & seaweed add a subtle hit of the sea.

I highly recommend adding these easy-to-prepare, delicious, nutrient packed morsels to your next seder.  Or, simply enjoy them anytime: with the warmer weather coming they would make quite a nice, cooling meal.
Posted by Abby Bean at 4:24 PM