It's no secret that I eschew fruit as dessert, so when I was gifted a Gone Pie Cherry Almond Chocolate Cup I suspect it was with a bit of a snicker. Certainly all in good fun, but that didn't prevent the pressure from building. 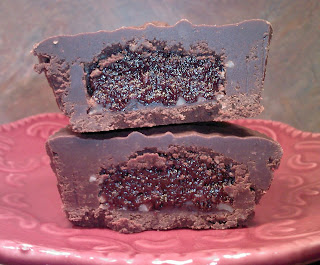 After having been so ultra impressed by Gone Pie's coconut brownie, I knew that I owed it to myself to taste the Cherry Almond Chocolate Cup; but doing so required significant mental preparation.  There it sat, mocking me from the counter in a way you'd never expect from something so seemingly innocuous.  I was so intimidated that I didn't even dare to photograph it "intact".  At first I ignored it, then I tentatively cast sidelong glances in it's direction.  I pondered.  After a while I approached, inspected, and considered.  Finally I couldn't resist; it is chocolate after all.

So, I cut it into quarters in order to share with the esteemed tasting panel: 1 vegan (me), 1 vegetarian, 1 token omni; the fate of the extra piece to be decided upon after the preliminary tasting.  I should note that no other member of the panel acknowledges the general misnomer of fruit desserts.  In fact, the vegetarian seeks out any and all chocolate/berry combinations and the omni obsesses over Lula's banana splits (Fresh fruit on ice cream? Gag.).  Unlike me, they were not approaching this tasting with trepidation. 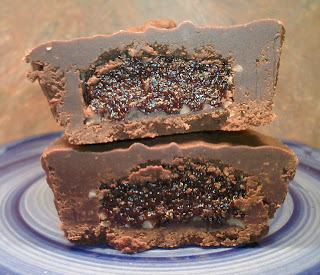 Unsurprisingly, the vegetarian went gaga.  Dark chocolate, cherries, almonds, and pine nuts; had a cannoli somehow been incorporated it would have hit upon all of her favorite things.  And, in a rare display of both cooperation and excitement, the usually un-opinionated omni proclaimed it "even better than the brownie".  And then it was my turn.

Let me start by saying this: I am in no way, shape, or form condoning the unnatural union of fruit and dessert.  HOWEVER, this cup was the jam (no pun intended).  I was mortified by very surprised at how much I enjoyed the melange of contrasting tastes and textures; every element* added a layer of flavor intrigue I never would have expected.  So much so that no sooner had I enjoyed my share did I take it upon myself to commandeer the remaining quarter for myself, only remembering at the last minute to be mannerly and share with the vegetarian.  (Yes, the omni had voiced his very positive opinion as well, but he's still an omni and thereby forfeits any claim to bonus goodies on that merit alone.)

My justification explanation words of wisdom:
It would seem that the Cherry Almond Chocolate Cup should not, under any circumstances, be considered a dessert consisting of fruit and chocolate.  Blech.  Instead, it should be noted that it is, in fact, CANDY.  That's right, candy.  And candy is not dessert because you can eat candy any time.  Yes, the Cherry Almond Chocolate Cup is, in fact, a wondrous, gigantoid, extra-ordinary, finely crafted, deluxe candy.  Go get you some!

Stay tuned for more Gone Pie from A Soy Bean!
Posted by Abby Bean at 7:52 AM