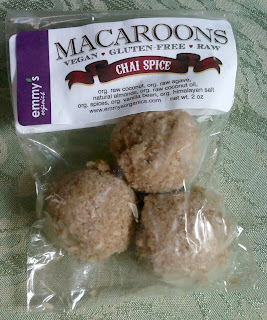 Chocolate-dipped, yes, but I don't usually like flavored macaroons.  Yet, for some reason when I spied all of the varieties of Emmy's macaroons at Dean's I was intrigued.  The cashier highly recommended the mint chocolate chip flavor, but seeing as the macaroons were raw and healthy and stuff I was afraid that I wouldn't like them.  I only seem to like mint chocolate chip when it's on the fake-tasting side; real mint kinda makes me gag.  Lemon-ginger and chocolate-orange were easy for me to pass up; fruit does not equal dessert!  The coconut-vanilla became a real possibility until I saw the chai-spice.  Really?  Coconut chai all wrapped up in a vegan macaroon?  Yes, please. 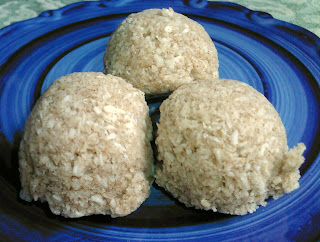 I have quoted them here because I really couldn't have said it better myself.  I think we've all had chai tea that was much too sissily weakly spiced, as well as overly spiced versions that give you a burning sensation at the back of your throat.  This was the chai-spice macaroon equivalent of the very best hot chai I ever tasted, made with coconut milk via the secret recipe of Blossoming Lotus.  Delicious!

The macaroon itself was impressive. Not only vegan, but raw & gluten-free; it was perfectly macaroony to me, and only enhanced by the eclectic pairing of the spice. The two parts: macaroon & spice, were done so well separately that together the flavor really flourished.   I don't follow a raw diet, but I'm always impressed by how a few clean ingredients and a dehydrator can achieve such a moist, delicious result.  Just to give you an idea of what we're dealing with here, the ingredients for this particular flavor are as follows:

Note: I've noticed that the website's flavor titles get a little confusing because some include the word vegan and some don't.  But, if you read their story, you'll see that all varieties are vegan, gluten-free, and soy-free.  So have at it and try any and all of the flavors.  Let me know which one you think I should try next dark-cacao, and maybe I'll take your suggestion dark-cacao.
Posted by Abby Bean at 7:53 AM