Who Orders a Small Shake From Foodswings? 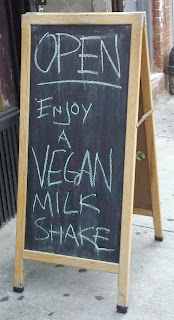 I'm not gonna lie; when deciding where to eat for breakfast/lunch the other day, Foodswings won hands down on the merit and reputation of their epic shake menu alone.  It was my first visit, so I was expecting some kind of crazy, shake decor/atmosphere.  Obviously there isn't any, but imagine my surprise to walk in and find that the only nod to the shake extravaganza that exists within the four walls of Foodswings is a display of the two available cup sizes: small and miniscule.  WHAT!?  Isn't this a vegan establishment...catering to hungry vegans?  To be fair I should note that Foodswings refers to their size offerings as "Regular" and "Large", but to that I say, "Um, no; I don't think so."

For the moment, I was able to look past the absurdity: partially because I was hungry and needed to get my grub on before moving on to dessert (shakes and Vegan Treats!) and also because part of me thought that the small cup was a kind of joke.  So tiny, how could it be serious?  Really!  Ha ha, good one.

Anyhoo, we had no idea what to order; how often do you find yourself in a vegan fast food joint?  Slightly overwhelmed, we decided to go for a bunch of old favorites. 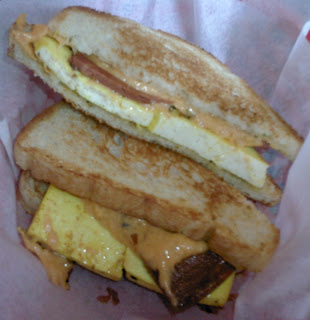 I could not pass up the eggie and cheese sandwich: Fried Tofu "egg style" with Sliced Soy Cheese on Toast.  I was hoping it would be served on a kaiser roll, but the toast wound up working really well with the sandwich.  Not sure what kind of cheese was on this, but I'm pretty sure it wasn't Daiya; it seems that they use Daiya only where specifically noted on the menu.  To that I say, USE IT ON EVERYTHING; so good!  Certainly the other cheese was fine, but who needs fine when you can have stupendous Daiya?  Yes, although I still pronounce it incorrectly, I am involved in a love affair with Daiya.  The whole sandwich was really good and authentically diner-y.  One note, though: go for the ham or sausage as an add-on.  I chose the bacon only because I was expecting it to be crisp.  Since it was kinda the same mushy (in a good way) texture of the egg, cheese, and bread it didn't really add anything, so I'd suggest one of the other options.  Also, ketchup, black pepper and hot sauce, of course! 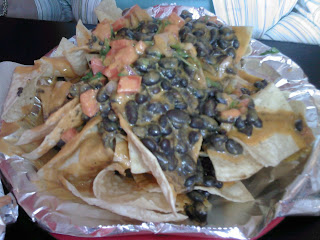 VM went with the classic nachos, Homemade Corn Tortilla Chips [!] Served w/ Chili or Black Beans, Tomato Salsa, Cheddar Soy Cheese & Tofu Sour Cream.  Again, I don't believe this was Daiya, but it was really good and saucy and they sure did put a whole heck of a lot of toppings on the giant mound of chips; no skimping at Foodswings!  Also, I don't know if it was Tofutti sour cream (unpictured) or not, but it was really thick and yummy. 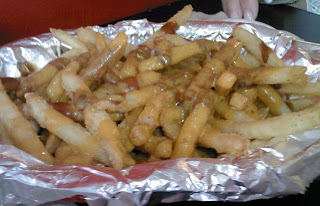 As spicy potato fiends, neither of us could pass up the chipotle cheese fries.  Perfectly cooked, shoestring "McDonald's"- type fries drenched in a creamy (presumably not Daiya) cheese and-- purportedly-- chipotle sauce.  Except for that no, it was actually BBQ sauce.  Huh?  Here's the thing.  I really like to dunk fries in BBQ sauce (especially sweet potato fries), but BBQ doesn't equal chipotle!?  What's going on here; I don't know, but the flavors do manage to work: just don't expect it to be spicy.  And, if you do: no matter; just drizzle some hot sauce onto your cheesy, inexplicably barbecue-y fries and enjoy.

Foodswings has four varieties of chicken drumsticks: buffalo style, barbecue, southern fried, and sweet southern fried barbecue.  I normally only eat chicken wings about once a year from Red Bamboo, but I couldn't resist trying the southern fried drumstick: Battered & Fried; I hadn't had crispy fried chicken in decades.  (Yes, I know I keep using the terms "wings" and "drumsticks" interchangeably; who cares when they're not real appendages?) 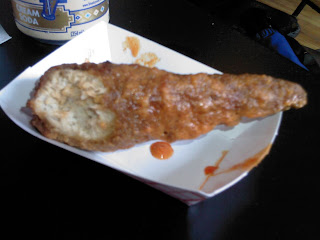 Ain't no thang but a chicken wing!
The especially cool thing about the Foodswings' wing menu is that you can order however many you want (even one!), or a combo plate that includes 3 wings and a side.  The side is huge, but I think it should be 4 wings & a side because how are you supposed to leave one out!?  Anyhoo, the southern fried drumstick was authentically crisp just like I expected; definitely a very good choice.  One oddity, though: there was some weird sauce slathered on it when I expected it to be dry.  The sauce was nice and tasty, but I couldn't put my finger on exactly what it was...or why it was there.*  Then again, I wouldn't hesitate to place a repeat order, so what do I know?  In other news, doesn't my bite mark look like a sideways heart?  Yikes!  I've been tweeting too much, <3!  *It would seem that I accidentally received a buffalo drumstick.  I have since seen the southern fried and will need to get one in my belly pronto.

Even I couldn't eat like this all the time, but it was a nice divergence from the norm.  If, like me, you overindulge and find yourself too full for a shake right away, don't fret.  Simply take a walk and come back.  But whatever you do, you must have a shake.  And not the tiny one, wuss!

While we were eating I noticed quite a few people coming in for takeout and taking shakes to go along with their food order; sweet!  But wait, what was that?  Some of them had that teeny size!  Crazy much?  Honestly, two sips and I'd be thinking, NEXT!?  I don't know, Foodswings, this is a mystery to me.  At least label it "kiddie size" or something in order to maintain your street cred. 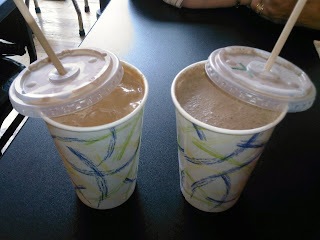 Do you need me to clarify that we had two larges (one each)?
I knew going in that I was having The Tank shake: Chocolate Ice Cream, Peanut Butter & Cookies (I know, right!); it's the one on the right with the "T" on the lid.  As a fellow fan of Terri's version, VM took one look at the menu and immediately chose the Butterfinger shake: Chocolate Ice Cream & Chik O' Stiks.  I don't know how she does it, but after I deliberated over my choice for weeks, at a moment's notice she managed to pick the superior flavor.  It was crunchier, sweeter, thicker, and I'd even go so far to say colder (maybe that part was in my head), but it was definitely THE shake.  Go get one!  But remember: if you get a small I'm going to laugh.  Or cry, whichever.  More shake for me (take that, Sip)!


So Foodswings is exactly what they say it is:
vegan (score) fast (yep) food (yum).
I do want to point out that it's counter service: the gal at the register is super friendly and nice and sweet, so you should definitely tip her a lot because she could just as easily be an eye-rolling, snotty, punk, hipster, but she's not.  The entire place is no-nonsense, the cooks are super fast and efficient, and I can't imagine they serve anything that you wouldn't like.  The end.

P.S. Their Daiya chicken parm sandwich is ridics.
Posted by Abby Bean at 6:54 AM

Email ThisBlogThis!Share to TwitterShare to FacebookShare to Pinterest
Labels: Foodswings