When I first heard about Rescue Chocolate's Peanut Butter Pit Bull vegan candy bar, my first thought was, "What a great cause"; then, "Let me support this vegan owned & operated venture immediately".  No, wait.  It was actually, "Did someone finally veganize the Whatchamacallit for me?!"  (I promise that the other thoughts followed shortly thereafter, but I really liked Whatchamacallits.) 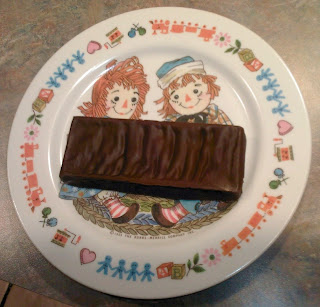 Since I was full of ice cream Because I have extraordinary willpower, once I got my hands on one I decided to hide it in the fridge for a rainy day.  You know, a rainy day that requires a veganized Whatchamacallit.  Yesterday was that day.  (Today is looking pretty much the same.)

If you've already had the pleasure of eating a Peanut Butter Pit Bull, I know what you're thinking.  "It's delicious but it doesn't taste like a Whatchamacallit."  And yes, even though everyone I asked told me the same thing, I still managed to convince myself that it would.  I took my first bite and was instantly overwhelmed by the decadence and surprised by the uniqueness of the candy bar.  Then I think I heard it laughing at mere peanut butter cups, but I can't be sure (i.e., more testing necessary!).  My first intelligable thought was, "This is inexplicably* yummy, but it tastes nothing like a Whatchamacallit."  Sometimes you just have to find out for yourself!

The coating of chocolate is straightforward, candy bar perfection.  It's the ideal thickness, the wave design is extremely appealing, and, most importantly, it's dark and sweet.  This sweetness proportionately compliments the saltiness of the delightful peanut butter center, which is hard to describe.  *The texture is light and creamy and melty and smooth.  It's not a truffle, but also not a cream.  Besides being dreamy, melt-in-your-mouth goodness, it's studded with rice crispies: for the requisite candy bar crunch.  Overall, the treat is like an exquisite dessert made portable and convenient by its candy disguise. 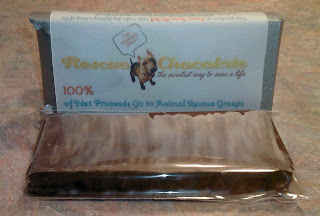 And guess what else?  All of the "net profits are donated to animal rescue organizations", so you're not so much buying candy as you are making a donation.  See how easy they made it for you to be helpful and get yummy things in your belly?  The credit goes to Sarah: for that, for bringing the Mocha-inspired idea to fruition, AND for representing the east coast in the vegan candy bar war.  Ok, so there is no such war per se, but a little friendly competition only means more vegan candy bars everywhere.

Which brings me back to the possibility of a vegan Whatchamacallit; enterprising vegans, I'm talking to you.  We have melty cheese for goodness' sake; is it so hard to veganize me a Whatchamacallit?  Don't make me make my own.  Seriously, don't; I have no skillz whatsoever.
Posted by Abby Bean at 11:01 AM