I've always been a fan of VWAV scones because they're super easy to make and they seem much fancier than cookies.  Even though there are still some chocolate chip ones in the freezer, when I found myself with some excess creamer in the house I knew it was time to make some more.

Unexpectedly, I decided to go for the glazed orange scones (p. 44-45) and guess what?  I followed the recipe exactly.  Ok, I didn't cut them as advised: choosing, instead, to simply plop them on the baking sheet lazy traditional like (I like them to look like that, so there).  But other than that I went by the book, literally. 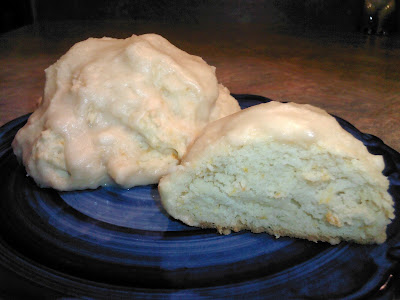 Okay, you caught me; I did double the glaze recipe.  I did this because, well, you can never have enough icing (is that news?). And boy was I right to do so.  The icing will dribble off the sides before it hardens (which will take a while), so I advise you to be at the ready with your mini-spatula: scooping and reapplying so as not to waste a drop.  You'll thank me later. 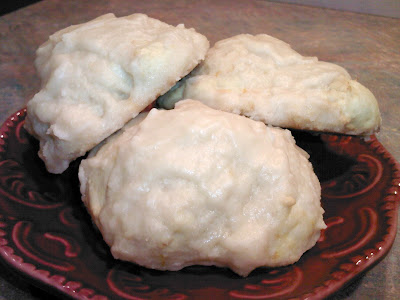 Since I still had creamer left over was on a roll, I decided to whip up a crazy (not really) variation of the traditional scones (p. 42):

To do so, I used the original recipe and added:

Because I thought I was out of AP flour should make them healthier, I used whole wheat flour. 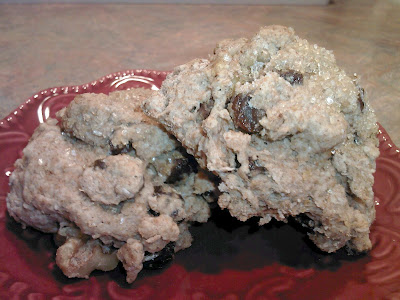 Despite the sugar sprinkle on top, these scones might have been the most crunchy granola thing I've ever created.  So much so that I didn't really like them until the 4th one I tried (if at first you don't succeed).  However, everyone else seemed to adore them and, because of that, I'll forgive the fact that they were referred to as both muffins (scones!) and rolls (scones!), and were even eaten on at least one occasion...with butter.

Nevertheless, get your scone on!
Posted by Abby Bean at 10:39 AM