I love breakfast for lots of reasons: Fruity Pebbles, Tofutti cream cheese, tofu scramble...but the main reason I love breakfast is, simply, maple syrup.  Pancakes, French Toast, if you can put maple syrup on it: I'm in.  So when The Discerning Brute reminded me of the Sunday waffle brunch, Petit Dejeuner, at the West Cafe, I went asap. 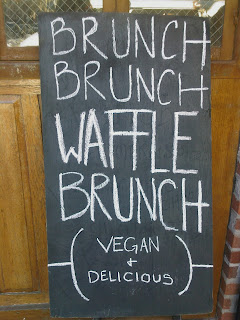 Apparently I am not the only person who loves syrup, because the place was packed; it took a little while for our group of six to get a table.  The menu varies week to week, but there are always plenty of options.  On this day: Le Classic, Pumpkin Spice, Orange Chocolate Marble, The West Mocha, and gluten-free (which came highly recommended).  I chose The West Mocha waffles and imagine my delight when they were served in awesome animal shapes!?  At that point it didn't matter what they tasted like.


But, luckily, they were delicious: there was a hint of coffee and it was just chocolatey enough.  I tend to make myself nauseous (in the best possible way) by cooking pancakes with more chips than batter; now I've seen the light.  Well, not really; but, these were still great!  And, in addition to the delicious flavor, the waffle texture was the perfect proportion of crisp to soft.


My only complaint is that there was some confusion as to which toppings came with which flavors.  And, by confusion, I mean that I unfortunately did not get any of the chocolate sauce or whipped cream I spied at the cooking station!  I will definitely inquire next time, and/or make a special request.  If there is chocolate sauce and whipped cream to be had, you know I'll have it.


I also tasted a friend's pumpkin spice waffle and it was very good.  But, let's face it; as much as I like pumpkin, chocolate beats pumpkin in my book any day of the week.  Also, the pumpkin waffle was square!  How can that compete?  It can't.


Now let's talk about the Mac & Yease.  I generally don't like to mix sweet & savory, but I decided to give it a go and I'm so glad I did.  As it turned out, the chef, Ayinde Howell, was so busy that my mac came out early enough that I was able to enjoy it apart from my waffles; in other words, perfect timing.  I love Daiya, so I understand if you're not convinced that Nutritional Yeast, when used in recipes to replicate cheese, can work.  Well, let me assure you that it does.  Besides the cheesy, creamy/crispy, very mac 'n' cheese like texture of the dish, it was also phenomenally seasoned.  Do not pass this up.  Really.  A friend ate two servings in one sitting and another was day-dreaming about it days later. 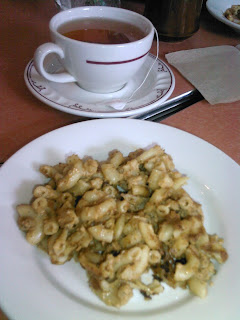 I admit that the price is a bit steep for breakfast at a counter-service cafe, however gourmet it may be; so, make sure to print out your free waffle coupon.  The brunch includes two, so with the coupon it will be three!  Who doesn't need an extra waffle?  I know I do. 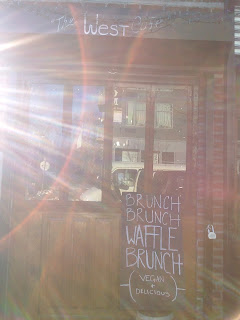 Email ThisBlogThis!Share to TwitterShare to FacebookShare to Pinterest
Labels: brunch