When I tried an an amazing brownie sample from newbie Bhakti Cafe at VegFest, I was surprised to find out that it was so close to my regular stomping grounds; I'd yet to notice it.  So, soon after I sought it out and hopped in to see what they had to offer.  I was happy to see that the cafe was beautiful inside and out, offered an all vegetarian menu- mostly vegan, and employed a friendly counterperson who gave me a take-out menu and told me she hoped to see me soon.  It seemed extremely promising. 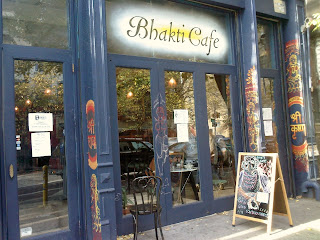 Although we usually pop into The Bean for coffee & a bite, VM and I decided to try Bhakti for a change on a recent weekend morning.  We arrived at 10:45 and, even though they'd already been open for forty-five minutes, the restaurant was empty, the music was off, and there were only a few leftover cupcakes and brownies to be found (i.e., no cookies).  A pleasant counter person welcomed us: warning that most of the menu items had been sold out the previous evening, but then backtracking to claim that she had been in early: preparing food all morning; it was a little confusing.

I asked about cookies and she said she could have two ready for us in ten minutes.  So, we grabbed a plastic-wrapped cream cheese brownie from the counter, ordered hot tea and coffee, and sat down.  Thankfully, the music went on and a few other diners joined us.  We noticed that practically everyone that came into the cafe asked for lattes, but the cafe only offers regular coffee served in a press.  This is fine, except for that it took an inordinate amount of time for said coffee (and tea) to be served and, while VM said the coffee was good, it was, unfortunately, barely lukewarm.  So too was my tea, which tasted much too bland to be a respectable chai. 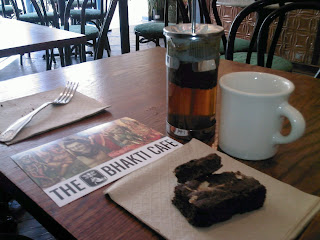 Without plates, silverwear, or napkins, we wondered how to dig in to our brownie; then I noticed a cafeteria-like area where you can pick up all of these things yourself.  The brownie was good, but definitely one or possibly even two days old.  We had long since finished it and our chilly beverages with leisure and were about to leave when we were finally served two, fresh from the oven cookies.  The chocolate, chocolate chip was meh, but the chocolate chip cookie was very good.  As a bonus, the hot water refill for my tea bag was considerably hotter than the previous issue so that was something. 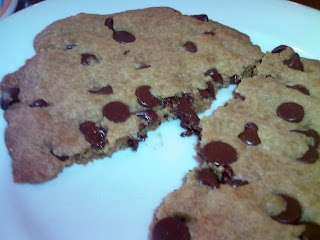 While I realize that coffee and a snack does not necessarily give you complete insight into a cafe's culinary capabilities, the service we both experienced and witnessed was odd enough that we both agreed that we will probably just stick to The Bean from now on; it just wasn't a good vibe.  The table next to us watched their hot breakfasts get cold on the counter as the counterperson chose to finish both filling the silverware buckets and her conversation, instead of serving them promptly.  There were an awful lot of staff members milling around, but none made eye contact- even the woman who seemed to be either the manager or owner; I hate that.  And tepid tea and coffee?  Uh-uh.

In conclusion, as inviting as Bhakti seems, there are way too many options in the area to settle for mediocrity.  With any luck they will improve and find their niche, but I won't be in a rush to find out.
Posted by Abby Bean at 6:43 AM