If You Tune in to Mexican Radio; Change the Station

A group of us decided to try out a newly recommended restaurant, Mexican Radio.  While not entirely vegan, they have many vegan offerings.  A few of us arrived early and decided to have a drink at the bar.  The average price is in the $10-12 range, but they do have a margarita special for checking in on Facebook or Foursquare.  I didn't hear any complaints about my friends' wine and margarita, and my Malibu lemonade was delicious (all were camera shy).  There were no complimentary chips offered at the bar.

Once our entire party arrived we relocated to a table, only to find that there are no complimentary chips offered with dinner either.  So, we decided to share an order of "Guacamole: served with a large plate of our homemade chips - it's just so good!" 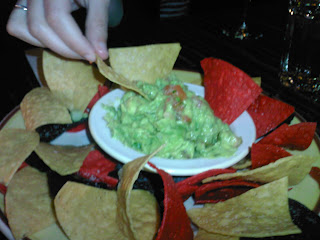 Yes, it was good; but only because it was made of avocado.  Other than that there was absolutely nothing redeeming or special about it, unless you count the exorbitant price: inappropriate for such a lackluster dish.  It was basically, to paraphrase one of my dining companions, "an ice cream scoop worth" of mashed avocado.  There were a couple of diced tomatoes, but no discernible onion, jalapeno, or even lime juice.  And the "homemade" chips?  To quote that same friend, "I don’t think anything at MR was house made.  Those chips came out of a unnamed economy size bag that just reads, 'Salty Chips'."  Now perhaps we're wrong and the chips are, in fact, homemade: even more of a reason for MR not to brag about them.

Moving on to the overpriced entrees.  Two of us decided to go with the enchiladas.  You get to choose two fillings but, instead of combining them in each of the 2 enchiladas, they oddly serve one in one, and one in the other.  The main problem with this is that it's the only thing in your enchilada.  So, a seitan enchilada consists of a tortilla with seitan inside: not very exciting.

Sure, they come with a "side" of beans and rice, but a) there is nothing exciting about them and b) the whole technique comes across as the spoils of an assembly line kitchen. 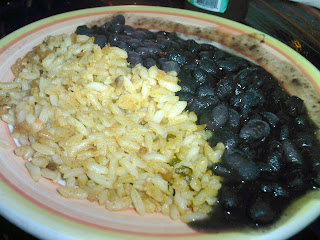 The enchiladas also come with a choice of sauce; we both chose the "red - a spicy, roasted tomato-jalapeño sauce".  To clarify, this was basically a water-thinned tomato paste with no spice, no taste, no nothing to speak of; it's most redeeming quality was that it was wet.  This came in handy because the tortillas themselves were in dire need of any moisture they could get.  But, it was not enough to save them; after one bite of the thick, mealy texture I quickly removed the filling and pushed the inedible tortillas aside.


The burritos were another story.  Ridiculously overpriced, they were smaller and considerably less stuffed than those you'd find at Chipotle (which I <3).  Both burrito-orderers agreed that there was nothing special about these. 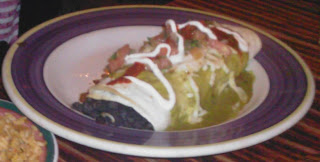 As for the vegan options, I do give them credit for trying.  But I couldn't help but to get the distinct impression that the words vegan and vegetarian were somewhat interchangeable in the Mexican Radio universe.  Perhaps I'm wrong?  At least the cheese is definitely vegan, but... Well, we all know that Daiya is ruling the vegan cheese universe right now, and the new, improved Teese is trying to reclaim their piece of the pie.  Yet Mexican Radio offers Follow Your Heart.

1987 called; they want their vegan cheese back.  I mean, really.  No offense to Follow Your Heart (I happen to love Veganaise), but really?  Cheese?  Bottom line: when you have an omni place like John's knocking it out of the park, any old half-hearted attempt just doesn't cut it.

But, obviously, Mexican Radio's problems go way beyond their vegan options.  The one cool thing is that the entire place is filled with various bottles of hot sauce: here, there, and everywhere.  Some are good, some aren't, but what they have in common is that they are all encrusted with dried hot sauce because no one ever cleans them.  BUT, hungry times call for desperate measures.  I bucked up threw germ caution to the wind when I spied the intriguing grapefruit habanero nearby.  It wasn't something I'd go out of my way to purchase, but at least it rescued my meal from being completely tasteless.

I'm sure my fellow diners will agree with me when I say we will never return to Mexican Radio.  Rather than recap the reasons in a concise list, I'll leave you with the simple observation that besides all of the other shortcomings (price, service- you got me, I couldn't help it), the crux of the problem is that Mexican Radio's food has no taste; it's wholly lacking seasoning of any kind.  I'm no Mexican chef, but the food is possibly less authentically Mexican than Taco Bell.  And, though I've not dined there in a decade, if my recollection serves, not nearly as tasty.

[2-4-11 UPDATE: As if all of this wasn't bad enough, it turns out the restaurant double charged my friend's credit card.]
Posted by Abby Bean at 12:48 PM