When I spied these sprouts in the store I didn't see them as a simple container of sprouts.  Instead, they looked to me like Hare Bhare Mung, a salad that I've had and enjoyed at Utsav. 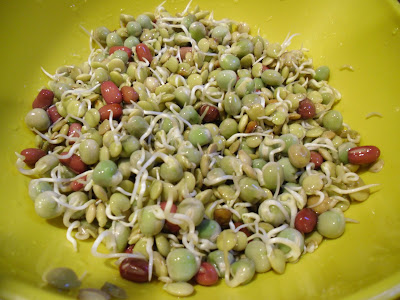 By the time I got back to my office I realized that it was up to me to bridge the gap between the container I now possessed and the end result I anticipated; the sprouts were not going to dress themselves.  According to the Utsav menu, Hare Bhare Mung is salad consisting of a spicy blend of fresh sprouts, tamarind, mint, chopped onion, cilantro, and chaat masala.  Omitting the cilantro was the easy part, creating my own chaat masala was the first challenge.  I chose this recipe and tailored it to what I actually had in my pantry, which was everything except amchoor powder and ajwain.

I had no idea where to begin in making the dressing, so that was the second challenge.  I played around until I came up with something that tasted good on my fingertip and hoped for the best.  Success: 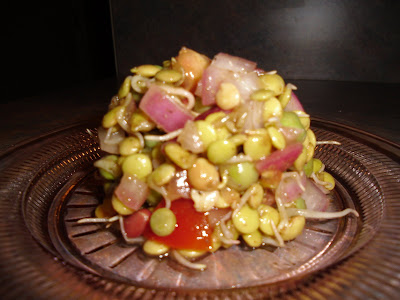 In a small bowl, combine your liquid ingredients.  Add the chaat masala, then toss to combine with sprouts, onions, and tomato.  Let marinate in the fridge overnight and enjoy.
Posted by Abby Bean at 7:12 AM