I am the only vegan at work, so I like to bake for the non-vegans; it's easy activism.  The results can run the gamut from silent, perplexed enjoyment to earnest (albeit odd) inquiries.  I do my best to maintain my patience, but it never fails to surprise me how many people underestimate vegan ethics: assuming that they only go so far as your own kitchen.  I can't tell you how many times I've had to explain that I don't use eggs- even when I'm baking for others.  The effort is made worthwhile, though, by the people who ask for recipes and promise not to substitute anything.  Having an unapologetic omnivore ask you if it's better to use soy or rice milk is priceless. 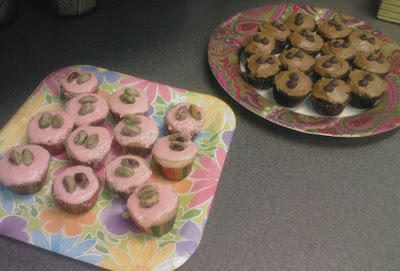 Vegan food or non, I have a problem when lunchroom goodies wind up crumbled all over the counter, carpet, door (yes, really) simply because of an annoying breed of people who "only want a taste" or a "sliver", or whatever other excuse will have them coming back to create ever more crumbs until they have eaten the equivalent of 38 shares of dessert and I am left sitting at my desk calculating how long it will take an army of ants to make it from ground level to my top floor of the building.

But I digress.  On this particular occasion, the cupcakes were in celebration of someone I greatly admire, so I wanted none of my own idiosyncrasies to spoil the well-intentioned offering.  The solution?  Mini-cupcakes.  Now I'm sure there is someone out there who would dare halve a mini-cupcake in an effort to cut back, but luckily no one meeting this description chose to do so in my office, on this day, on my watch. 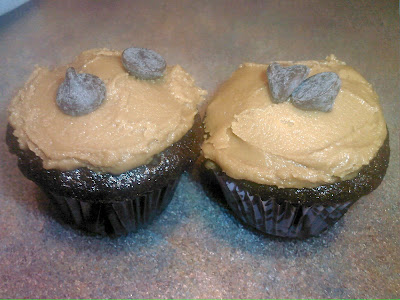 I used your basic chocolate cupcake recipe from VCTOTW (p. 37-40), adding scrumptious Sweet Earth chocolate chips to the batter.  Then I iced with Biscoff spread and garnished with chips.  Since the cupcakes were minis, I originally used one. 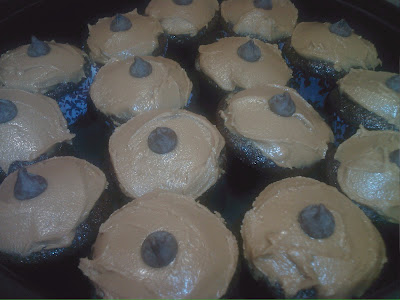 When I realized they looked like boobs I added another.  Baking is hard! 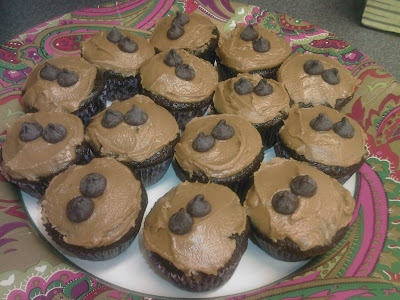 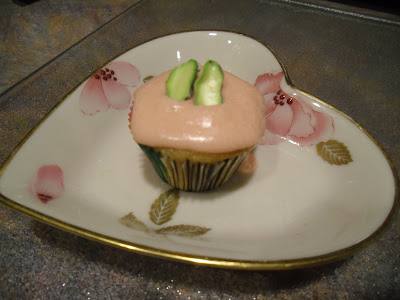 Also from VCTOTW, I followed this recipe (p. 116-118) almost to the letter.  I did omit the chopped pistachios from the cake; initially this was because that step is missing from the directions, but ultimately I decided this cupcake should be smooth.  I used whole pistachios for garnish. 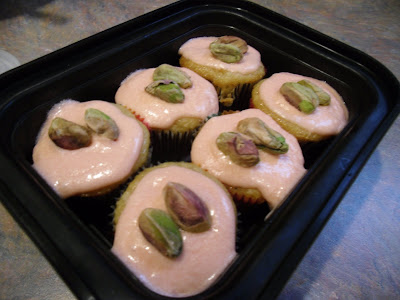 Both cupcakes went over extremely well and the size was not only effectual in preventing a cupcake melee, but adorable to boot.
Posted by Abby Bean at 6:58 PM