On our first full day in London, my friend made reservations for the Alternative London walking tour.  He explained it as an urban street-art tour and I was all in. 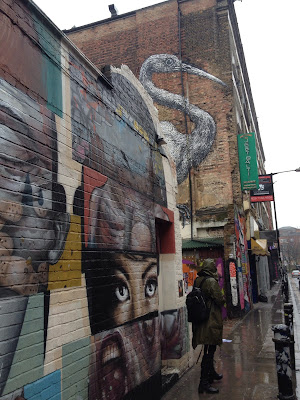 "This is our original tour which was established to showcase East London's incredible creativity whilst giving insights into important historical and cultural events that have made the area what it is today.

Even though this is much more than just a London street art tour, you are guaranteed to see a huge range of artwork from around forty artists per tour. Street art by nature constantly changes, which in turn means that our tours also change and evolve on a very regular basis. This guarantees that a tour with us will always feel fresh.

This is the first London tour to run on a pay-what-you-like basis. This ensures that it is accessible to everyone - regardless of their budget. Tours are around 2 hours and start and finish near Spitalfields Market on Tuesdays, Wednesdays and Thursdays at 12p.m & 7p.m, Fridays at 12p.m. and Saturdays at 12p.m & 3p.m. Head over to our bookings page for available dates and bookings"

I couldn't put it better myself.  Part street art education, part history lesson, part political activism: this tour was awesome and our guide, Doug, was phenomenal.  It was a testament to his knowledge and presentation that he kept 30 people out in the relentless, pouring rain for over an hour and a half.

This is where you'll meet your tour: for serious. 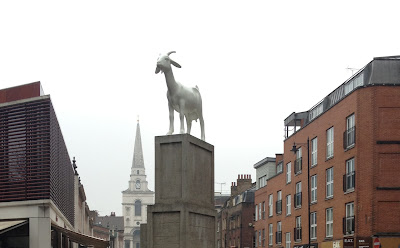 Here we are embarking on our wet tour:
﻿
﻿
I never would have otherwise noticed this monstrous fella atop the signpost. 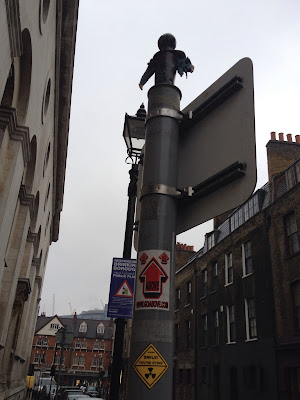 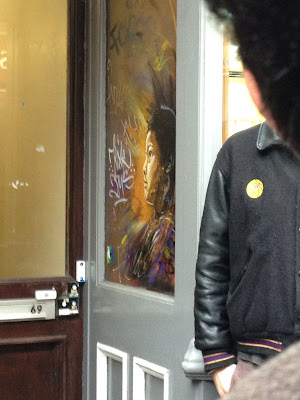 I'm sorry to report that, due to the weather, it was impossible to jot down notes of artist's names or history.  However, this afforded me the opportunity to simply enjoy the tour- the whole trip, in fact- rather than documenting it. 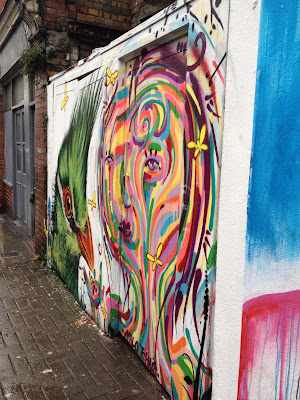 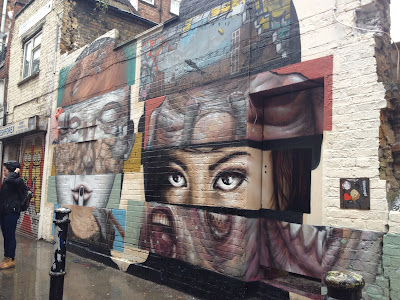 At some point in the tour we were all in a narrow alley listening intently.  A person easily navigated through the group of us, yet stopped to complain to Doug that we were blocking the walkway.  He didn't skip a beat: asked us all to huddle closer and then continued with the tour.  This rather unpleasant person took a few steps, then turned around, returned to Doug, and complained again.  It was my opinion that he was responding much too cordially (shrug), so I told her that if she would just be on her way and stop making such a big deal out of nothing, we'd be gone in five minutes.  She seemed astonished to have been confronted, walked up to me, and said, "Well you don't have to be a prat."  I assumed it was an insult, but it wasn't until a few days later that I learned it was British slang for jerk. Really?  I was the one being the jerk in that scenario?  Well, it's Mean Bean to you, lady!  Carry on. 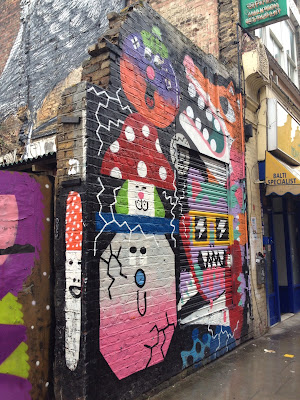 This artist is Roa: 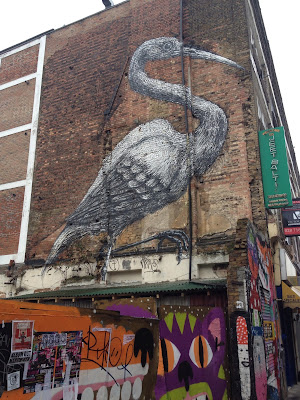 Mid-tour, my appreciation of the important piece before me was interupted when I noticed these hilarious no parking signs that were painted in a designated-motorcycle parking area. 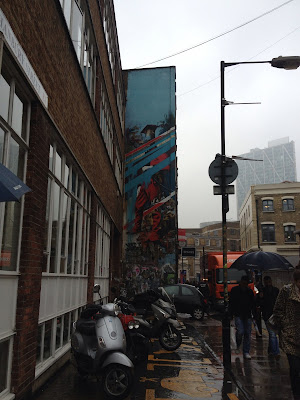 People of East London: know that if you chose to ignore the signs and park here anyway, there's no telling what tragedy could befall your vehicle. It could be cut in half. 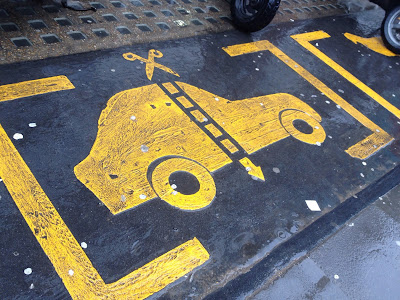 It could be put out with the trash. 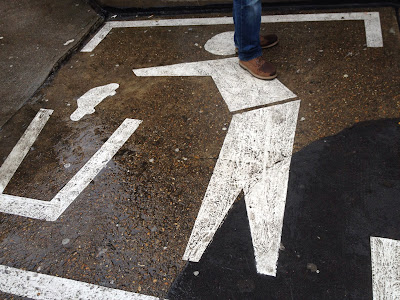 The neighborhood pigeons will most assuredly poop on it. 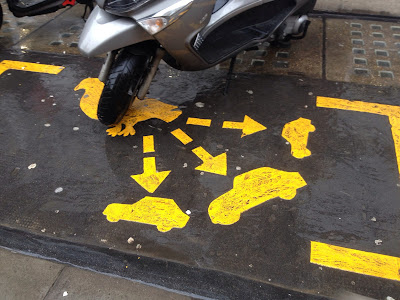 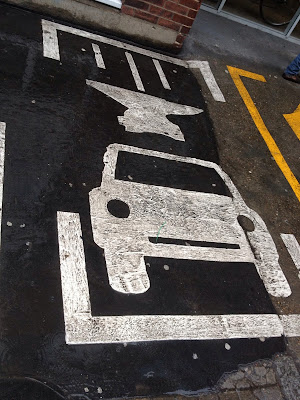 Or it could be eaten.  Consider yourself warned. 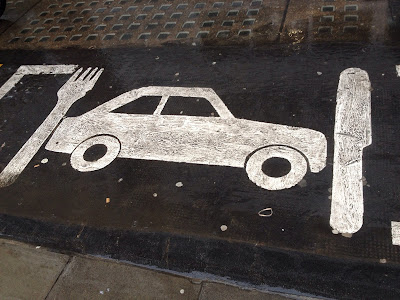 Back to the tour! 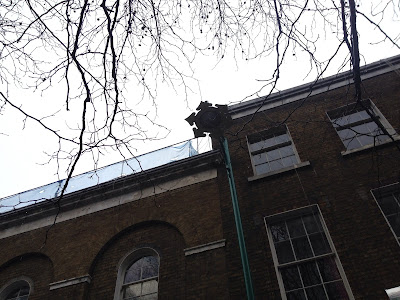 Ok, this isn't street art; the tree was just really interestingly growing over the fence. 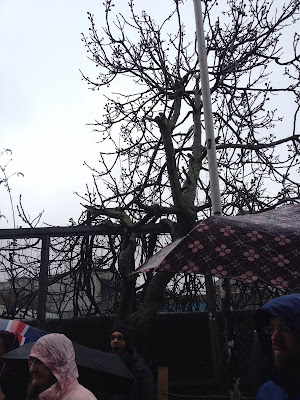 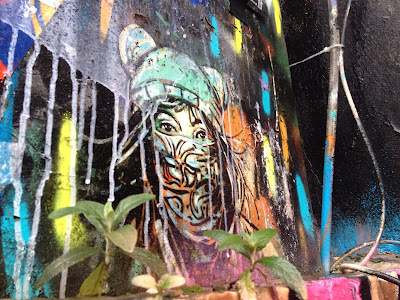 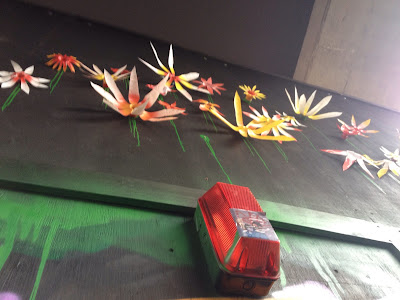 Funny Embarrassing story: as I was rounding the corner, Doug asked if anyone knew who this portrait was commemerating.  Because I have no filter, I blurted out "Eddie Murphy!"  It's not Eddie Murphy, of course; it's Usain Bolt (love your gold sneaks, UB). 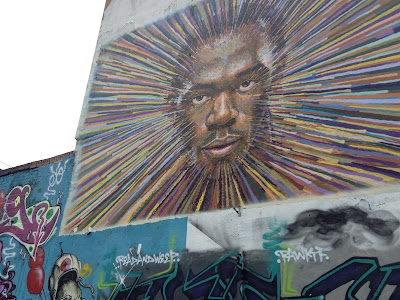 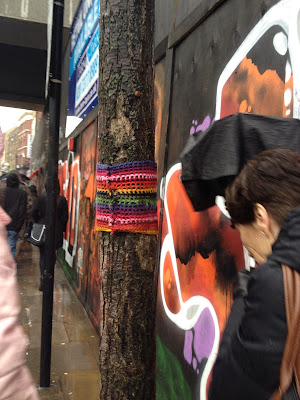 ﻿﻿﻿﻿﻿And then I remembered.  Does it ring any bells, New York peeps? 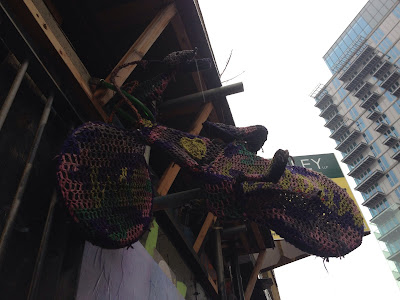 How about now?  Yep, from New York artist, Olek.  It's been my FB and IG photo for years! 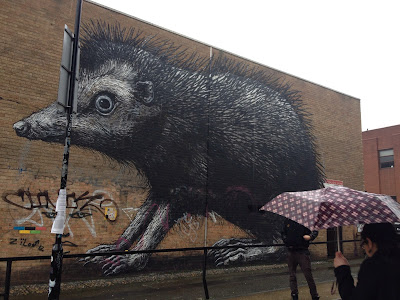 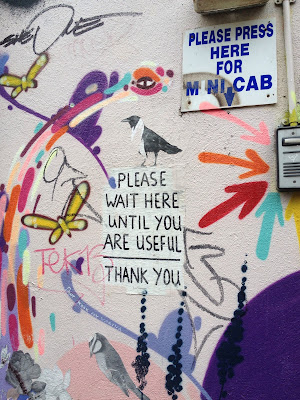 Not only didn't we lose anyone during the tour, but we actually gained an interested party.  Despite being positively soaked through (the pocket of my bag where I kept my Oyster Card actually had to be emptied of water), I was sorry when it ended. 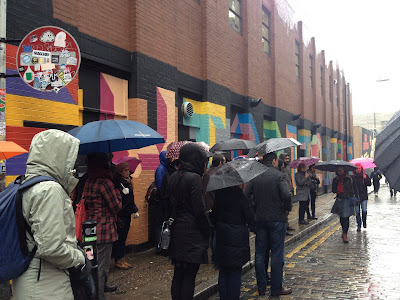 The tour begins and ends right outside the Spitalfield's Market, so leave time before or after to explore. 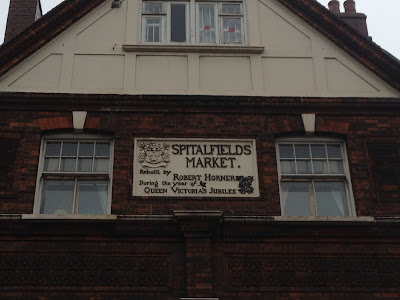 There are proper shops, but also stalls of both independent crafters and mass-produced crap. 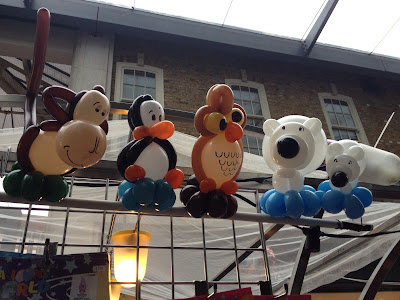 We were lucky enough to have been there during a fine art show, as well.


I can't recommend the Alternative London Walking Tour enough; it was a definite highlight of our trip.  I can only imagine how incredible it would have been if my sneakers weren't squishing water with every step!  If you can't already tell, I think you should go to London.  While you're there, definitely take the Alternative London Walking Tour and make a generous donation to the hardworking folks offering such a wonderful opportunity.


If there's anything I took away from this tour, it was a reminder of the lessons I learned from Grover and the Everything in the Whole Wide World Museum.  To paraphrase: look up, look down; look all around.  Otherwise, you might miss something.
London Tip: Umbrellas: don't use them.  It rains in London; this is not a secret.  In fact, we got more than our fair share in terms of intensity- most notably during this tour!  But we learned quickly that umbrellas- especially on a walking tour, are annoying.  Please wear a hat, or a hood, or anything else to cover your head instead of using something that will obstruct the view and impede the path of other pedestrians.
Posted by Abby Bean at 8:08 AM