I admit that, upon arrival, we first went to the hotel to drop off our luggage.  But our first official stop was Vx!  We're only human, after all. 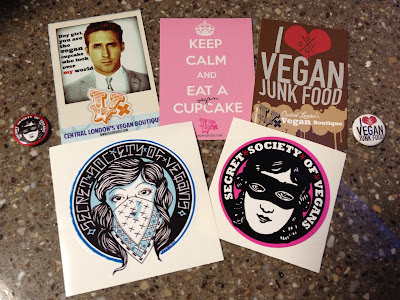 One tube stop and a short walk* and there it was: 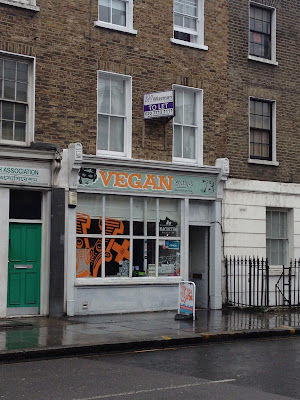 And then we ran across the street**. 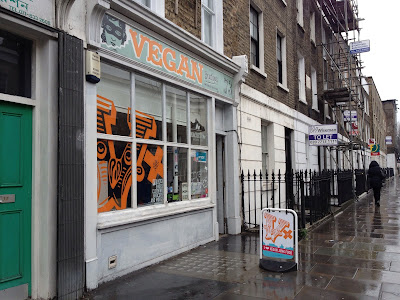 The shop is relatively small, but with an extremely wide variety of offerings (much less packaged food than Food Fight, but more assorted non-food stuff).  There are shelves full of goodies: mostly cookies and candy bars- many kosher parve options that you may or may not already be familiar with as being available in Brooklyn.  I tried to ignore the refrigerated and frozen items because they were an impossibility for me as a traveller, but I did spy some amazing-looking stuff like sliced cheeses that I would have loved to have tried.  I did forget that they offered freshly made grilled cheese; and, since no one mentioned it as an option, I didn't have one!  There were Vx branded pins/stickers/posters and a large selection of t-shirts and shoes (some hats and belts too).  Add to that a takeaway case of sammies and cakes, as well as a dedicated Ms. Cupcake mini-fridge, and I was completely overwhelmed with options; I plainly didn't know where to look first.


In the background of this picture is the poor chap whose every sense was bombarded by our American excitement.  He seemed slightly more impressed with us than the owner, who acted like Vx is everyone's first stop in London and actually told us, when we were taking what was apparently too much time to decide what we wanted, that not everyone was on holiday.  I get it; I do.  But we were.  And we were excited, so it would have been nice to have been made to feel a bit more welcome- especially vegan to vegan.  I'm sure even this guy was ultimately touched by our infectious effervescence; NYC doesn't have a dedicated brick and mortar, so we were really appreciative of Vx's very existence and were hoping that it would have been a highlight of what was essentially our vegan tour of London. 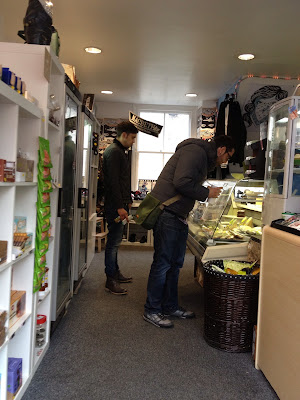 Moving on to the fun stuff: after the less than delightful airplane meal followed by some delectable crisps, I was excited to balance out my tastebuds with this cherry, chocolate, coconut cake by Cat and The Cream.  There was understandably no dedicated dining area in the shop, but I would have loved to have dug into this while perched on their sole bench.  Not feeling terribly inclined to stay, I instead enjoyed it on the walk back to the tube.  The cherries were dark and there was even a pit in one- it doesn't get any fresher than that!
﻿

I bought this shirt as well; I couldn't decide, so I got both.  Note: if you are in the shop perusing the shirts and happen to take one off a higher hook, finding yourself in a position where you can't reach to put it back...expect not to be assisted, but instead instructed on where to find the stepstool- while the owner stands cemented behind the counter waiting to do you the favor of taking your money. 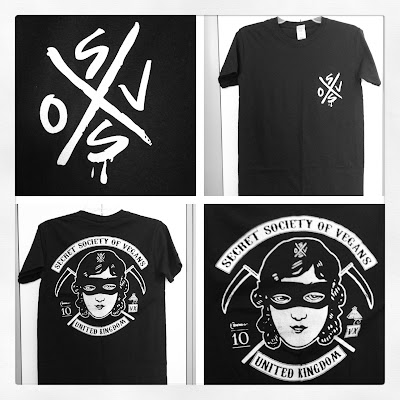 My view while contemplating my haul as we took the tube to our next destination.
﻿

On our last day we returned to Vx to pick up a few more things; non-receptiveness be damned: support vegan business!  There was a young girl behind the counter and a young man laying on the bench reading; it was immediately obvious that they too were non-plussed by our visit and palpable excitement, so once again we made our selections as quickly as possible and left. 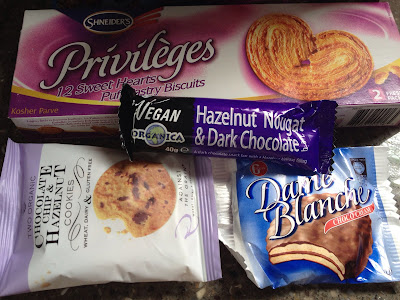 I really don't get it.  My guess is that you're in business to have business; why not be warm and/or welcoming to the easiest customers of all- friendly, vegan, destination shoppers?  I enjoyed most everything I purchased at Vx, but the experience didn't exactly leave me feeling warm and fuzzy.  This was not an issue with me and certainly not "a London thing", because I did feel extremely welcomed by MANY other veg establishments who were quick to chat and so pleasant that I'd willingly run back to support.  In any event, my delicious booty:

Zomg: admittedly, these crunchy, swiss dark chocolate bears looked a little on the mutant side, but they tasted like the best crunch bar you've never had.  Let's face it; dark chocolate and rice krispies are win-win. 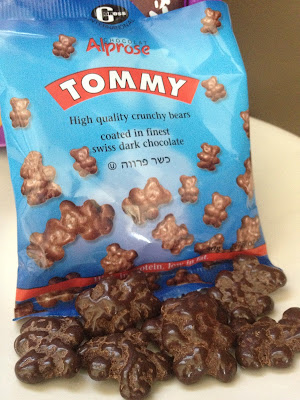 These chocolate chip & hazelnut cookies were lighty and crispy with a very pleasant hint of hazelnut.  Gluten-free and organic too! 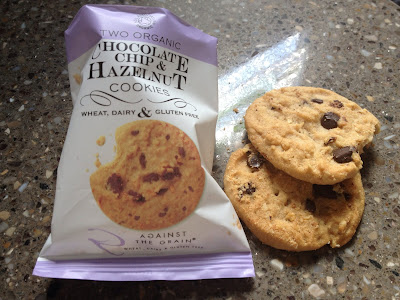 There was something about this Dame Blanche chocolate cream cookie sandwich that really appealed to me, but I bought the single insead of the larger multi-pack in case it didn't taste as good as it looked.  Mistake!  Chocolate cream- between two flaky cookies- dipped entirely in chocolate; how could I have thought it could have been in any way wrong? 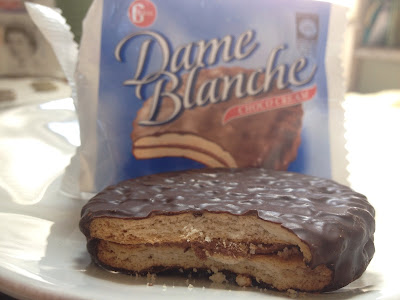 Ok, I did expect  the chocolate-dipped "smiley cookies" to appear slightly less creepy than these were, but they were pretty yummy and there were a lot in the bag, so I forgave the clown smiles.  Actually, I didn't; I ate them upside down. 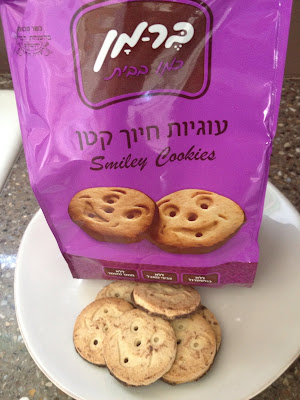 My traveling partner really liked his, but I did not enjoy the vegan Organica candy bar.  Perhaps because I noticed only the words hazelnut and dark chocolate in the description hazelnut NOUGAT & dark chocolate.  I'm not a huge nougat fan (what is it?); it's only tolerable to me if it's extremely fluffy and this was not.  There was a thin layer of hazelnut atop tasteless, pasty nougat...and not nearly enough chocolate to bring the whole thing home.  But, if you're a nougat fan, go ahead and give it a whirl. 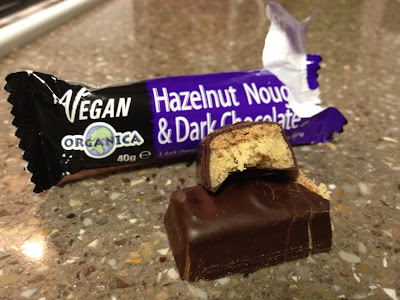 When I was a kid we called these cookies elephant ears.  I don't know why I assumed the ginormous, thick, flaky cookies of my memory would somehow be lurking inside this realtively small box, but considering they looked so drastically different, they didn't taste half-bad.  Just don't delve into the package or bite into the cookie expecting traditional, gigantic Palmiers and you'll be happy. 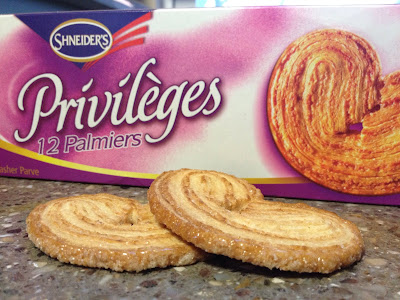 I would definitely recommend visiting Vx; they carry a bunch of packaged snacks items, a huge assortment of miscellany, and the branding is awesome- even if the reality of the in-person experience is significantly less so. 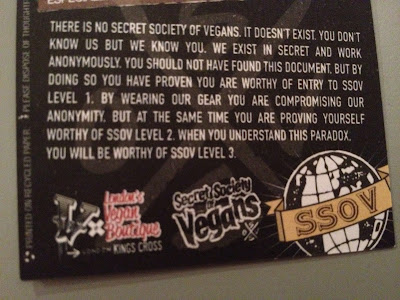 *London tip: Much like in NY, London has the tube/underground (subway) and buses.  They also have the overground (overground trains).  Maybe because they have so many clean and (mostly) efficient mass-transportation options, people are hesitant to suggest that you walk any distance.  Bearing in mind that a 15-minute walk is not a big deal, you'll have no problem navigating with only the tube if you so choose.

**London tip: Guess what?  Traffic travels in the opposite direction than at home!  This sounds obvious, but not when you're crossing the street on instinct; remember to look both ways.
Posted by Abby Bean at 7:57 AM