Shakes on a Train: Terri Opens in the Financial District, Makes Dreams a Reality

Rumors have been swirling for some time that Terri was to open a second location in the city.  Not too long ago, it came to fruition: in the Financial District.  My initial reaction was, "Oh, boo; I'm rarely, if ever, that far downtown."  But, then my wheels started turning...  OD worked in the World Trade Center for years and still has a lot of contacts in the neighborhood: most notably, his dentist.  That would ostensibly mean that at least twice a year I could have Terri delivered to my door- FREE OF CHARGE (wink, wink); I immediately got to work writing instructions on a drink caddy. 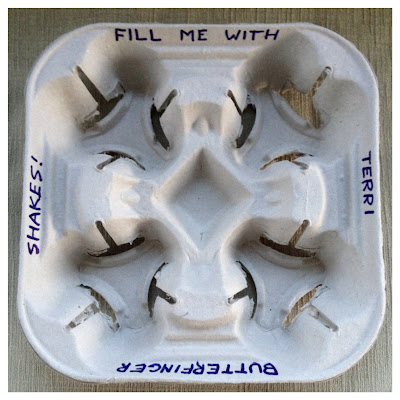 You read that right: 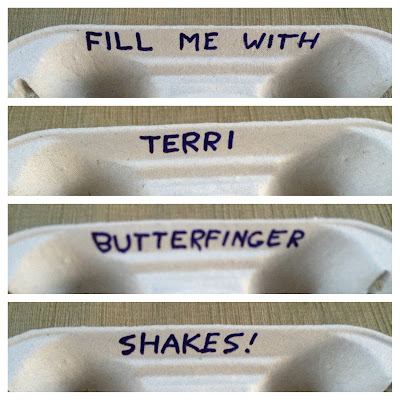 I was able to ascertain from VM a reliable source when his next appointment was scheduled and emailed him my inaugural order: almost a month in advance.  Then I began peppering him with questions about his general dental health.  The mission is Terri optimization You can't neglect those chompers!

VM and I chatted excitedly about the impending delivery, dubbing it Operation BFS.  Before we knew it, the day had arrived.  For VM, our favorite chickpea "tuna" melt: chickpea salad, Daiya cheddar, tomato, red onions, Vegenaise.  She chose not to reheat it and it was TERRIFIC as is. 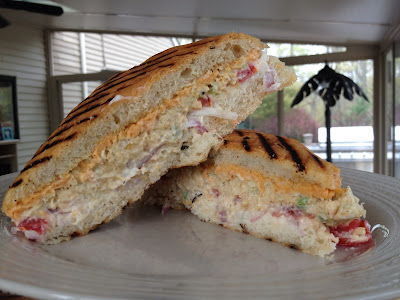 I decided to try something highly recommended that I'd never had before and went with the bacon cheddar chicken ranch: "chicken", soy bacon, Daiya cheddar, ranch sauce, lettuce.  I put it in a 375 degree oven for about ten minutes and it was great as well. 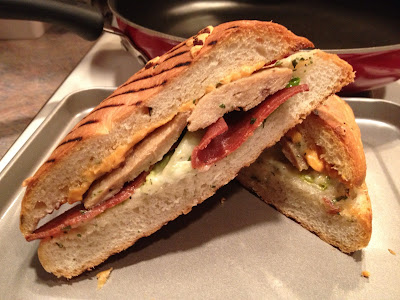 What a nice dinner on what would have ordinarily been a night of leftovers in front of the tv (not that there's anything wrong with that).  The one thing that was missing, though, was potato salad.  I actually did order it, and OD did buy it; unfortunately, it was invisible.  I tried to call the cafe, but the number I had contained too many digits.  And, for some reason, I couldn't convince OD to go back for it.  Until next time, potato salad!
﻿ 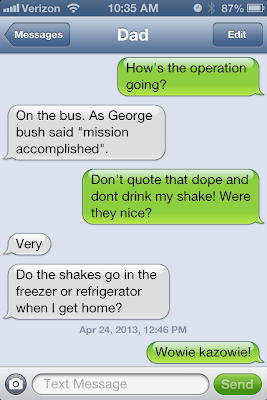 But, he did it; he secured our Butterfinger shakes.  HE REALLY DID IT!  The lids were firmly taped on, he'd frozen them as suggested, and now it was time to drink them! 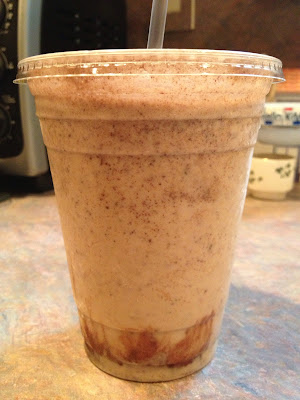 VM has no self control is a Terri Butterfinger shake fanatic.  She drank around the edges as it defrosted and even resorted to a spoon at some points.

I, on the other hand, managed to maintain decorum and allowed my shake to defrost for 2 hours before partaking in its glorious perfection.


And, I'm happy to report that even though it had traveled, been frozen and defrosted, it was just as I'd hoped.  For those of you who aren't familiar, the Terri Butterfinger shake tastes like an ice-cold, super-thick, liquified butterfinger.  In other words: YUM.  Because of the success of the mission, I've already floated the idea of keeping multiple shakes frozen in our respective freezers at all times...in case of emergencies. 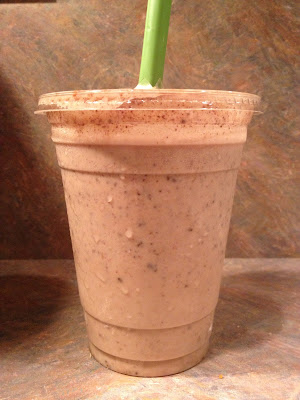 But, wait; there's more.  Apparently Terri had samples of baked goods on the counter and OD was so impressed by the banana cake that he got us each a slice. 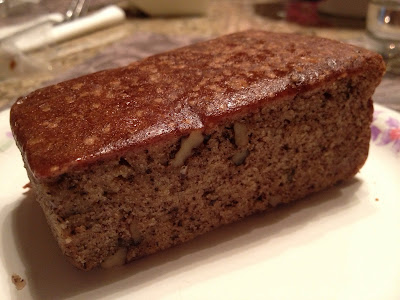 Full disclosure: I'd made my own banana cake earlier in the week.  This was, admittedly, much better.  So moist and springy!  I'm also a sucker for a sprinkle of cinnamon.  Let's just say that in a showdown between mine and Terri's, the Esteemed Tasting Panel unanimously sided with the professionals.  My feelings are hurt just so much that another Butterfinger shake will be sufficient to ease the pain.  XOXOXO, OD!

All of our best of luck to Terri: especially in their new Financial District digs.  I can't always make it to their location in Chelsea, so it's nice to know that I'm guaranteed a downtown feast twice a year (at least?).  The report from OD was that the staff could not have been nicer and could not have taken greater care to pack the order so that it could sustain its considerable journey (he's been instructed to take an establishment shot for context next time).  If you haven't yet given them a try, I urge you to do so at once!
Posted by Abby Bean at 12:10 PM