Let me preface this post by saying this: Horns is not vegan; they are a burger joint with some dandy vegan options.  I want to make this clear so that, should you find yourself there, you don't eye the decorative cleavers and other, assorted, butcher-related paraphernalia and immediately think bad things about me.  [UPDATE 12/5/13: After what's being described as a "friendly debate" with Vegan Treats' own Danielle Konya, Horns has removed all of the taxidermied animals from their decor! Bravo to Danielle for being super and to Horns for being swell.] Concentrate on the good: like their vegan burger: 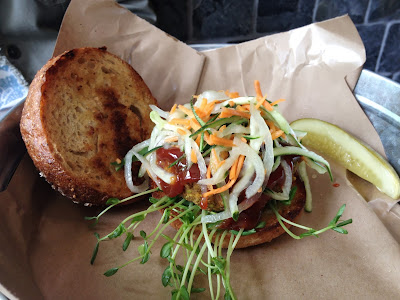 I'd passed Horns a couple of times while in the area (not far from Vegan Treats and the Sands Casino), but it looked a little rustic for my taste. 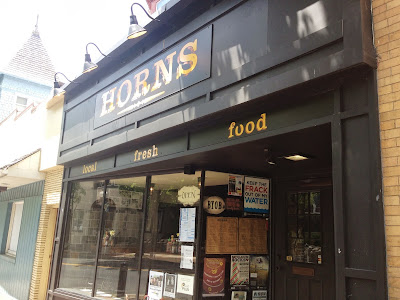 But, once inside, aside from the afore mentioned cleavers and other various nods to decidedly non-vegan fare, I was happy to find the decor was actually extremely clean and quite charming- minus the "trophies" which I convinced myself were fake. 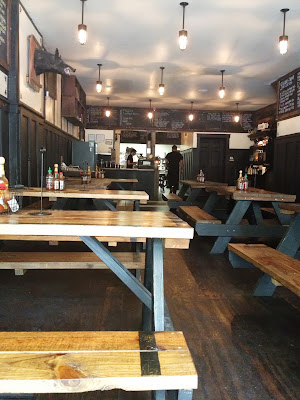 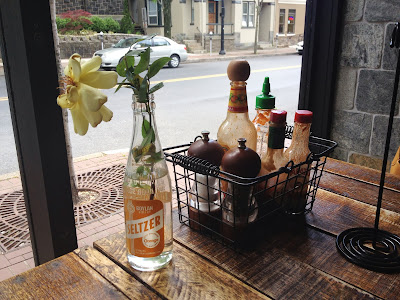 Upon arrival, you choose your own seat and a member of the Horns' staff brings you a menu and explains that you can order at the counter (where specials are listed on a great big chalkboard) on the faaaar end of the restaurant whenever you're ready.  There, you'll find "Super Duper Filtered H2O" available for $0.50, bottled drinks, or unsweetened house iced tea (3 flavors) and lemonade. 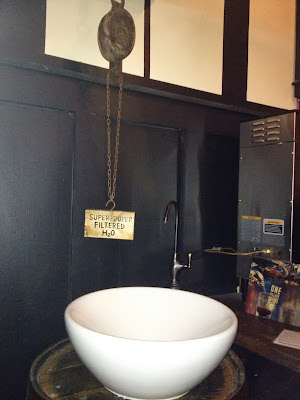 You bring your drinks back to the table with you.


But, the food is delivered- all in various sized metal receptacles lined with paper.

While not described as such, the woman who took our order assured us that the shoe-string onion straws: "hand-cut and fried, made to order" were vegan.  There are enough here to feed ten people. 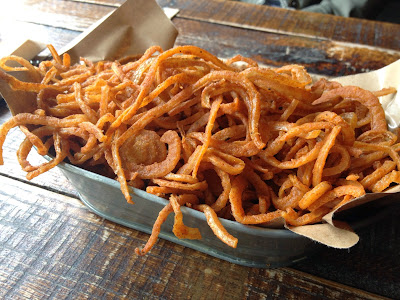 Because we had no idea the side portions would be so large, we also ordered the fresh cut french fries: with chives, truffle oil, sea salt.  Also a huge portion, but I did a pretty good number on them if I do say so myself. 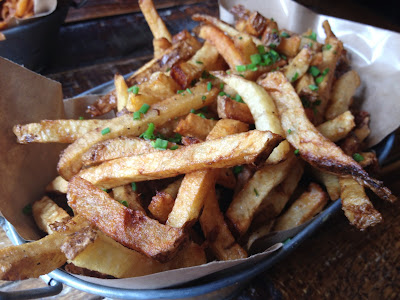 My friend chose the vegan burger: lentils, almonds, edamame, dried porcini, cous cous, vegetable slaw, spicy pomegranate ketchup and pea shoots on and 8 grain roll.  It was impressive and she enjoyed it- especially the housemade ketchup. 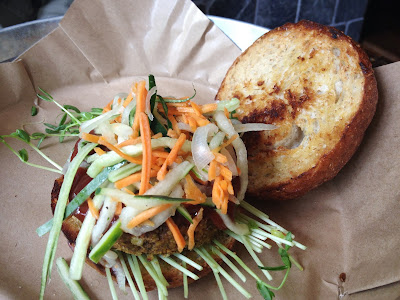 With Memorial Day right around the corner I knew there were a lot of veggie burgers in my future, so I chose the vegan sloppy joe: tofu, mushrooms, sweet peppers and onions in housemade sloppy joe sauce, served on an 8 grain roll.  I'm happy to report that it was as delicious as it was sloppy.  My friend wasn't feeling the pea shoots, but I have to say that they lent a nice crunch and bit of freshness to the rich, sweet sammie contents. 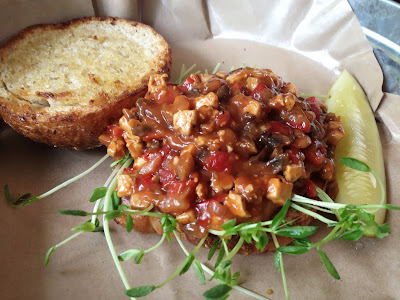 Horns mission is to serve local, fresh food.  A chalkboard in the dining room lists the nearby farms where they acquire their fruits, vegetables, bread...and meat/dairy.  They do not pretend to be a vegan establishment; instead, they simply offer local, fresh, vegan food as an element of their repertoire.  While I'm a sucker for all-vegan restaurants, I also appreciate the thought behind such impressive offerings and execution in an omnivorous restaurant.


Incidentally, this is how I like my cows.
Posted by Abby Bean at 5:57 PM