If we didn't already want to visit Ms. Cupcake based solely on their often-tauted Ferrero Rocher cupcake, this QuarryGirl video of the proprietor really put it over the edge. 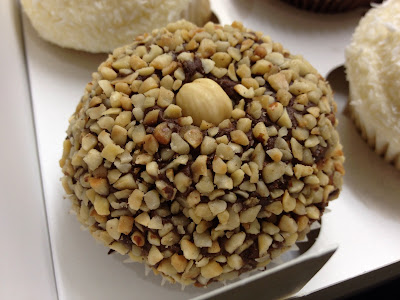 However, due to an unforeseen tube problem on our way from Camden, we found ourselves rushing down the street in search of Ms. Cupcake with very little time to spare before closing.  The grown (?) man on the bicycle who shot each of us with one of his two, imaginary, finger pistols did not help with my time anxiety. 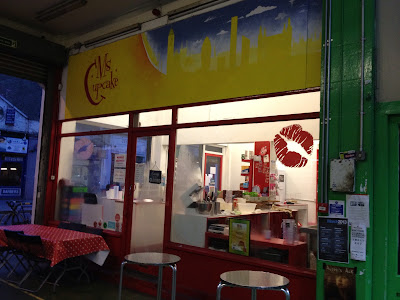 For those of you who might find yourself in the same position (looking for Ms. Cupcake at the last minute, not being shot at with fingers), please note that the entrance is actually not street facing, but in a little alcove of shops.  It might also be helpful for me to relay that, from a vegan perspective, there didn't seem to be much else of interest in the vicinity and, by ten to six on a Sunday evening, everything else was already closed anyway.  In other words, plan your trip for earlier in the day and leave time for tube delays!
﻿

﻿In any event, the view from inside is much more exciting.  We apologized for being "those people" that come in right before closing and were told with good humor that it didn't matter what time we arrived as long as we left on time.  Anyone who's worked retail can appreciate that!  We got started right away; that pile on the counter is our booty in the midst of being collected. 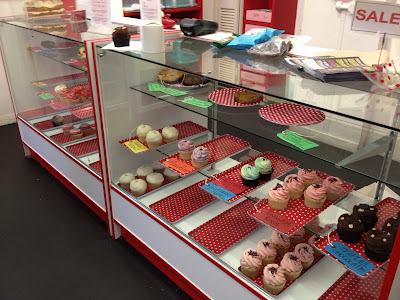 I can only assume that they were running a bit low on stock because it was UK Mother's Day, as well as- did I mention, ten minutes to closing.


But, it also meant that they had these FAB Mum's Day sugar cookies.  Two words: vegan glitter.  Also, VM!﻿
﻿

Guess what else they had?  The coveted Ferrero Rocher cupcake!  It also had another name, but I was too busy cupcake-blocking the other customers to retain extraneous information (Ambassador?).  The important thing is, I prevailed got them. 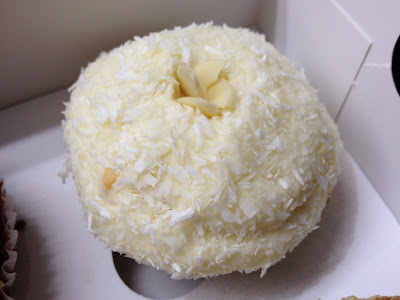 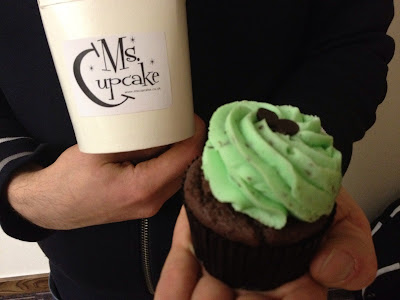 And the double chocolate cupcake. 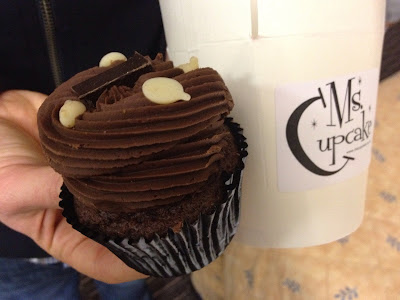 Full disclosure: I bought more than a few.

Okay, there were five.  I bought FIVE CUPCAKES, okay? 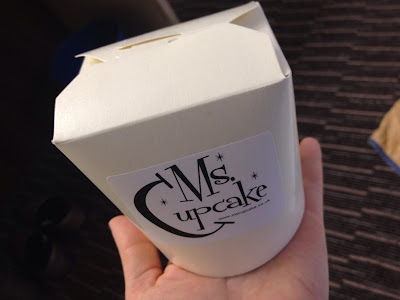 In my defense, they were my breakfast in the days that followed.  Here I am in the treacherous hotel elevator on our way to the nearby Starbucks.  Cupcakes trump porridge!

Let's discuss.  First of all, the Ferrero Rocher cupcakes are the bomb.  When you bite into one, you feel like you're biting into the world's most enormous, delicious, authentic, Ferrero Rocher chocolate candy.  I don't know what else there is to say about it except for that it highly exceeded my longstanding expectations.

There- in between the cake and the icing- lies what I presume to be the magic. 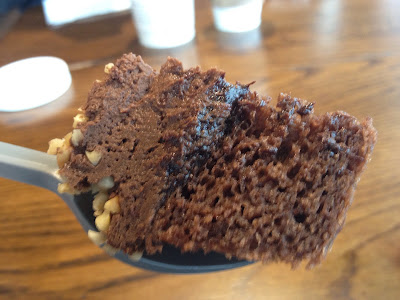 In case you're not familiar, Ferrero Rocher is a non-vegan, chocolate candy that the company describes as "a tempting combination of smooth, chocolatey cream surrounding a whole hazelnut; within a delicate crisp wafer...all enveloped in milk chocolate and finely chopped hazelnuts."  Ms. Cupcake nailed it in cupcake form.

The almond coconut cupcake had a tough act to follow. 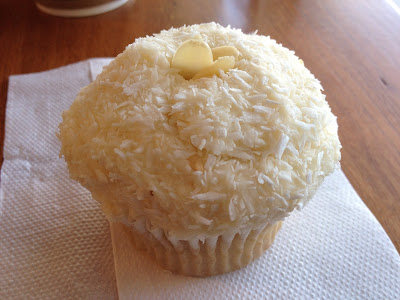 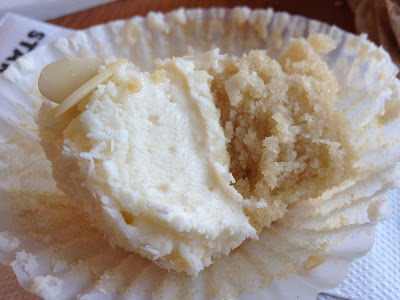 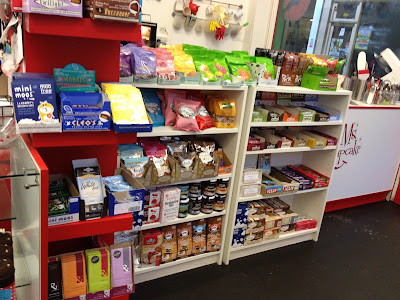 Add to that cookbooks and a freezer full of frozen delights: including Booja Booja ice cream. 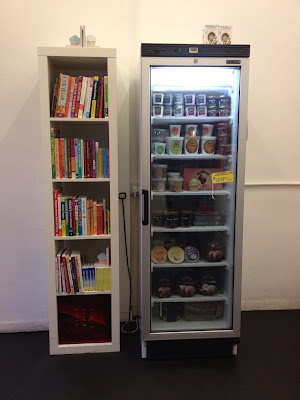 There were even savory, refrigerated sandwiches for goodness' sake!  Talk about one-stop shopping.﻿ 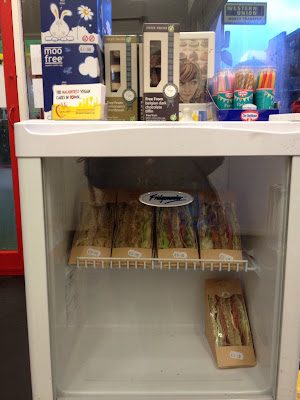 I'm sorry that we didn't have more time; I would have especially liked to have further investigated the awesome decorating stuff (i.e. edible, vegan glitter).  I was so overwhelmed with excitement and the time crunch wasn't exactly helping; my apologies to the staff for being scarily anxious and excited.

Not that there was any time to do so, but it's a shame Ms. Cupcake doesn't have indoor seating.  We did notice these tables outside, but it was a tad too chilly for that.  Londoners must be made of hardier stuff than me.

Fear not; I did manage to choose a few things to take home besides cupcakes. 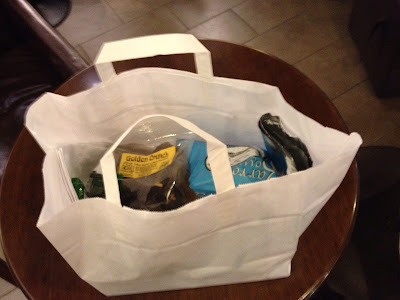 For starters, the cookies were for you-know-who.  Because she's nicer than me, she shared.  Even 3 days later they were fresh, yummy, and utterly enjoyed.  The yellow and red decoration may look like fondant, but- if it was, it was the softest, tastiest fondant I've ever eaten. 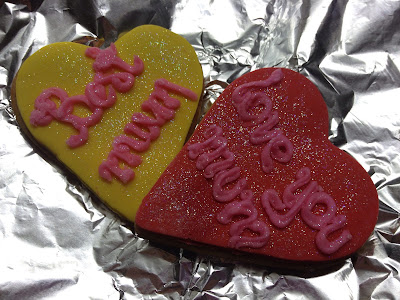 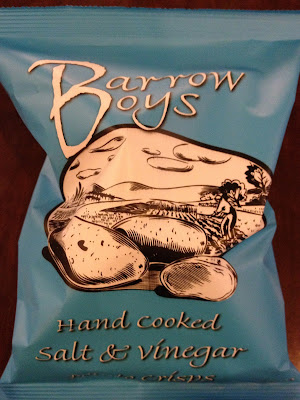 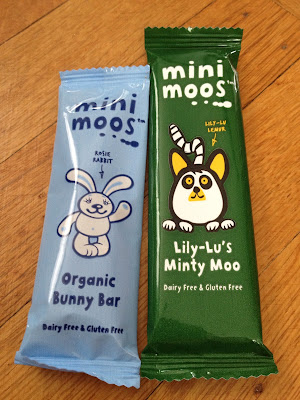 ﻿
This mini moo organic bunny bar went to OD because it was "milk" chocolate.  Unfortunately, it didn't fare too well; I'll assume it was the journey that took it's toll.  He said it he didn't like it and was rather emphatic about it; ouch. 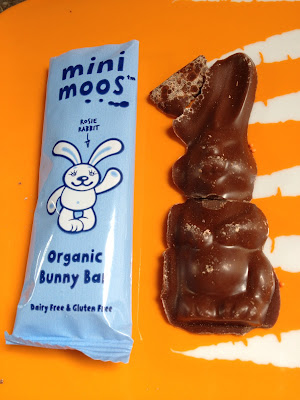 The minty moo was a surprise purchase.  I generally don't gravitate towards mint chocolate candy, but did you notice that cute lemur on the package?  I did!  What a pleasant surprise to find that the candy bar was extremely delicious: lighter chocolate than I'm used to, but with minty crispies!!  Must.  Find.  Stateside. 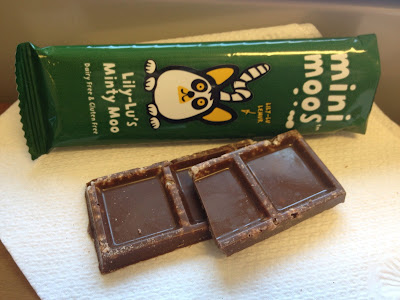 Holy Cow's Golden Crunch: cinder toffee coated in dark chocolate.  I've heard of this before and a friend loves it, so I decided to grab a bag. 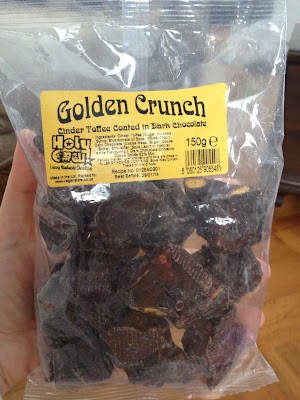 Let me tell you, this stuff is odd!  It's crisp, but then as you chew it becomes really sticky: not recommended for those with fillings.  To make matters worse, it had a smoky aftertaste; is this an English thing?  Between that and the orange color usually reserved for cheese-flavored edibles, I was left me totally perplexed. 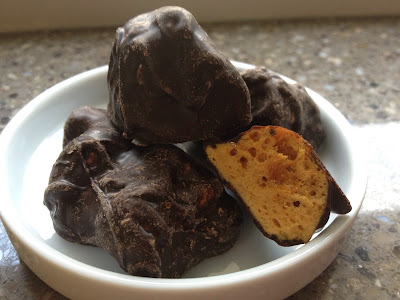 Bottom line, if you find yourself in Ms. Cupcake: take a few packaged items home, but be sure to binge on the house made stuff.  I'm still dreaming about this cupcake. 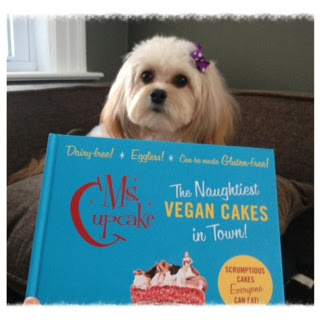 While it doesn't contain the recipe for the Ferrero Rocher cupcake, it does contain lots of recipes for equally delicious sounding treats: I especially have my eye on the Bakewell Tart (think almond and raspberry), as well as the famous Jaffa Cakes.  There may or may not also be a special mention of one of my favorite bakers within its pages ;-)

The cookbook is stunning and is a celebration of Mellissa Morgan's accomplishments, the shop, and staff.  A hearty congratulations! 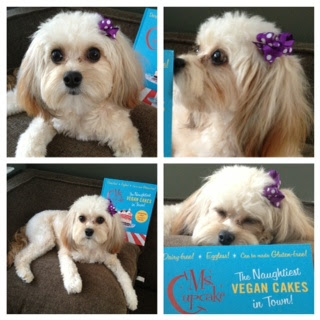 London Tip: We were actually extremely impressed by the efficiency of the tube...especially on weekdays; we rarely waited more than a minute for a train.  On weekends we didn't fare as well: planned and un-planned closures affected us more than a few times.  However, the announcements are always clearly audible (!) and we were both impressed when the conductor lamented, "I'm sorry again for the delay; I know how you must feel."  Even though we were pressed for time headed to Ms. Cupcake, his courtesy made me feel- if only slightly, better.
Posted by Abby Bean at 11:03 PM