I was inexplicably craving a vanilla ice cream float the other day, and had heard from The Shenandoah Vegan that Trader Joe's vegan, vanilla was a hit.  Unfortunately, when I arrived at my local Trader Joe's, the two remaining containers were crushed to oblivion and I was told that they would not restock if there was stock remaining.  In response to my equally crumpled face, the response was that "there was nothing wrong with them."  True though that might have been, I did not want to bring root beer to a friends' house with a tub of ice cream that looked like it had been run over by a tractor trailer, so instead I bought their cherry chocolate chip non-dairy frozen dessert and decided that the float would have to wait. 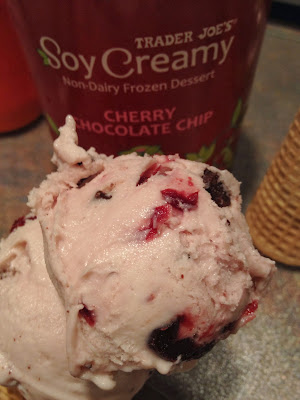 Unlike some (non-vegan despite what they may think) people, it's been a LONG time since I've had Ben & Jerry's ice cream.  But I do fondly remember the taste of their Cherry Garcia flavor, and this cherry chocolate chip knocks it out of the park!  Way more cherry flavor, way more chips, and absolutely no animal cruelty.  I will say that it left a slightly odd taste in my mouth both times that I had it (I've never had this happen with any other vegan ice cream), but it was no match for the enjoyment that preceded.  Just be forewarned that you may want to brush your teeth soon after indulging.
Posted by Abby Bean at 9:58 AM