I know that I'm usually too busy scarfing Butterfinger shakes to notice the actual food at Terri, but did you know that they now serve breakfast sandwiches? 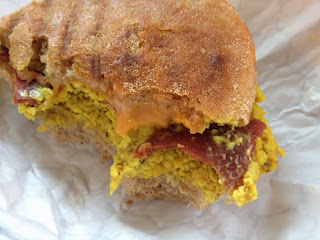 Five (somewhat similar) variations of breakfast sandwiches to be precise, as well as "mashbrowns (with peppers and onions);" check it.


I want credit you to know that I bypassed aaaaaall theeeeese gooooodies... 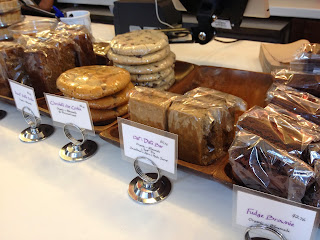 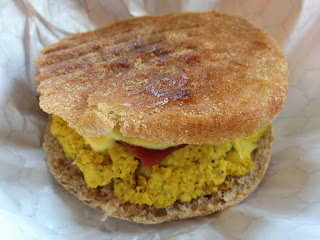 The employee told me it was tempeh bacon, but clearly it's more along the lines of Smart Bacon, which I actually prefer (scandalous!) because of the superior crisp factor.  Interior view: 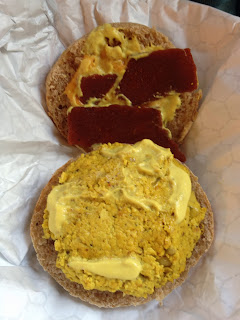 Don't let the fact that it's not a circle-formed block of tofu egg fool you, this "tofu scramble" is really yummy and manages to stay together as you chow down.  Impressive non-squishability mid-nosh:

My friend tried my sammie on a previous visit and enjoyed the sausage, egg, and cheese sandwich with hollandaise sauce on an English muffin this time; he liked it better: FYI.  I'm sticking with the bacon!


We didn't go for the mashbrowns this time because we were headed for a Vegan Shop-up later in the day; however, I did return an hour later for a Butterfinger shake (come on; how could I not?)- which caused the (same) employee to smirk.  I would have smirked too in his position.


I'm going to need another one of both very soon.
Posted by Abby Bean at 8:46 AM