Manna Restaurant was on our short list from the second we even considered going to London.  We did find it curious that no one we encountered during our trip recommended it, but we agreed that we had to try it and saved it until our last evening. 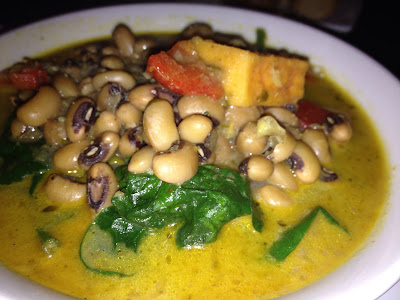 In fairness, the universe did try to warn us.  We used a payphone to call Manna in order to determine what tube stop they were nearest; apparently that is a very unusual inquiry.  My traveling companion made the call while I held the door open in a valiant effort at fumigation*.  We expected the phone call to go like this,

-at which point I was practically wetting my pants I was laughing so hard.  Eventually they came to some understanding about a nearby tube stop and we relied on iPhone maps to take us the rest of the way. 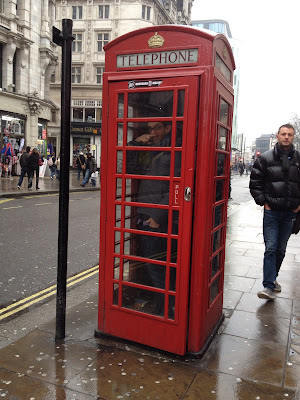 And, before we knew it, there it was.  Not so far or hard to get to; we're still not sure what the fuss was about; it was an extremely short walk from the Tube. 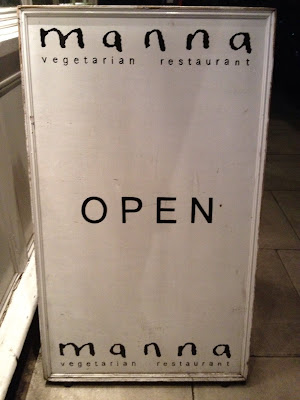 Woo hoo (or so we thought)! 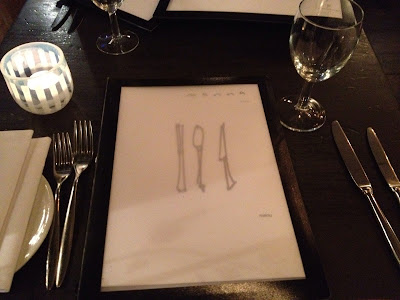 The vibe was not at all welcoming, but I liked some elements of the decor.


We'd asked the host/waiter/tube-stop coordinator if we could sit in the back room, but he unceremoniously told us no. We're not sure why; it wasn't exactly crowded.


House red for my friend and a flat, warm grape juice spritzer for me.  Doesn't spritzer, by definition, suggest bubbles? 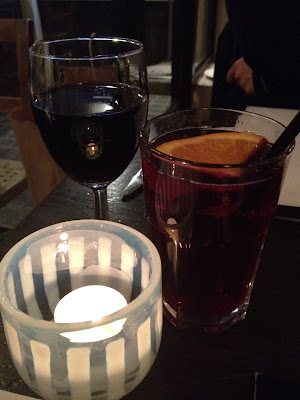 Our waiter was unusual, to say the least, and the service was not at all befitting the high-priced establishment (incidentally, not as high as the upscale establishments in New York).  There was no welcome, no offer to answer any questions about the menu, and absolutely no suggestions.  My traveling companion had to ask separately for the special starter of the day, pasta of the day, bean of the day, and grain of the day.  At some point you would assume the waiter would have gotten the hint and given us the whole rundown, but no; each question had to be posed individually and the responses were boring and delivered with a shrug ("just brown rice").  When we placed our order, he acknowledged each bit with a series of monotone "yeps," as in: "yep, yep, yep, and yep."  Charming.

Because it's been too long since I've had it from Peacefood or Soy & Sake, I was extremely excited for the vegetable tempura: "back by popular request, crisp seasonal vegetables in a rice flour batter served with sweet chilli & tempura dipping sauces."  Unfortunately, it was startlingly flavorless and absurdly oily.  Given the upscale establishment, my friend was actually offended.  I'm no health nut by any means, but these were greasier than anything I've ever ordered at Foodswings- where it's intentional and expected (also delicious). 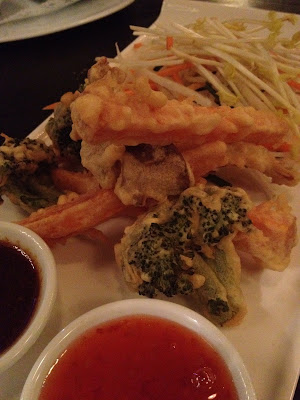 If there are onion rings on the menu, I have to order them- especially after the gem at tibits.  Onion rings: with ketchup (or?);" these were so much worse than the tempura. 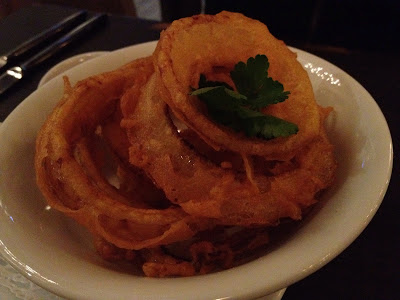 Since the menu had left the dipping options open-ended, I asked the waiter for some suggestions.  He was wholly and animatedly perplexed by my inquiry.  An explanation of the menu's inference elicited just another shrug and an offering of mayonnaise.  Whatever. 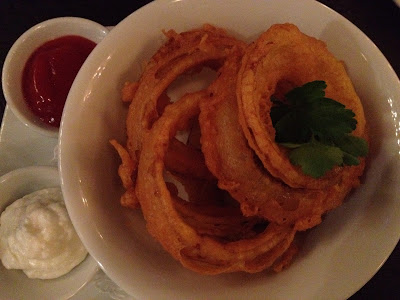 Although he tried valiantly to extract a recommendation, ultimately my friend had to blindly order the build your own meal: "choose any 4 sides and let our chefs plate it for you.".  He chose:

sauteed seasonal greens & garlic: "an immune boosting addition to any dish"  I'm pretty sure the theory was for these greens to flush out all of the grease we'd consumed from our appetizers, but as I recall they were on the oily side as well.
seasonal mash and gravy: "potato based with seasonal root vegetables, comfort food for all"  These had a nice taste, but nothing special.  I'm also not a fan of watery gravy.
manna crispy marinated tofu: "a protein boost to any dish, a long time favourite from our chef's salad"  These were WEIRD!  They were deep fried and I didn't want anything to do with them.
organic hummus & bread: "our own homemade hummus special and breads"  The hummus got the highest marks and the gluten-free bread was decent.

It's a sad day when the best that can be said of an upscale restaurant is that it makes a decent hummus.  For the record, my friend's description of the whole meal: "it was gross." 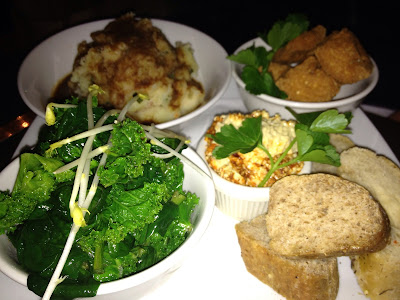 I suppose because of the damp weather I'd been eating heartily all trip; this was no exception, as I ordered the Caribbean platter: "a Jamaican pot stew of coconut milk & seasonal vegetables including sweet potatoes & spinach, aromatic rice, a jerk tofu, plantain & red onion kebab, served with a pineapple, ackee and a grated courgette [zucchini] salsa;" it sounded promising. 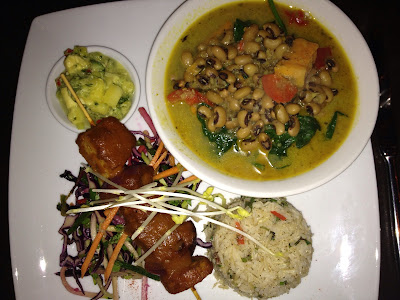 The stew looked great!  With all of the delicious ingredients, though; it erred, inexplicably, on the bland side.

The kebab was my favorite component of the meal; the sauce on the tofu, plantain, and onion was the tastiest thing on the plate.  The cabbage salad underneath looked appetizing, but there were infinitesimal specks of cilantro flecked throughout, so I had to let it go.  Note to restaurants: if you're not going to mention that the most hated weed in history is in your dish, at least be considerate enough to make it easily extractable. 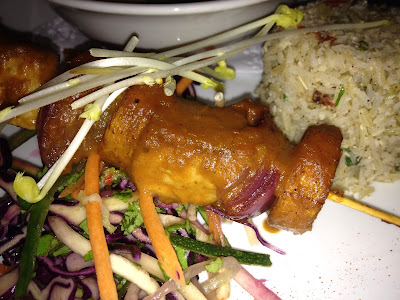 Unless they're upside down in a cake, I try to stay away from pineapples for the sake of my tummy.  Mixed with zucchini?  No thanks. 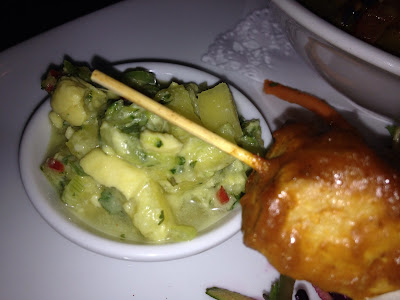 After having fallen down my own house stairs shortly prior to the trip, I was made to feel most at home when I went flying down the steps headed to Manna's basement restroom.  I'd missed this sign, which nevertheless doesn't sufficiently impart that the actual danger lies in the fact that the steps are about half the depth and rise of what is expected.  Perhaps a better warning would be simply to impart, "Prepare to have your arms practically dislocated when you grab the handrails in an effort not to sail through the air"? 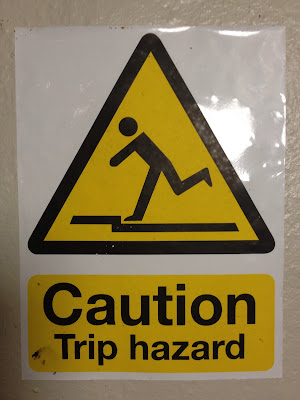 As if all this wasn't fun enough, there was still dessert to contend with.  My friend passed, but I was a glutton for punishment. 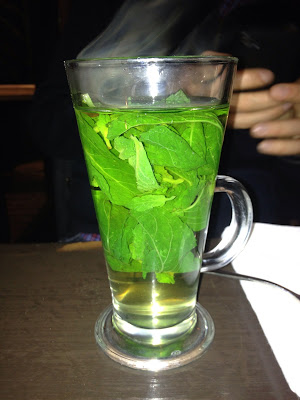 As for my selections?  For starters, behold the absolute worst hot chocolate I've ever had in my entire life.  Watery and flavorless, it tasted like someone used one packet of hot chocolate mix to make eight gallons of murky hot water. 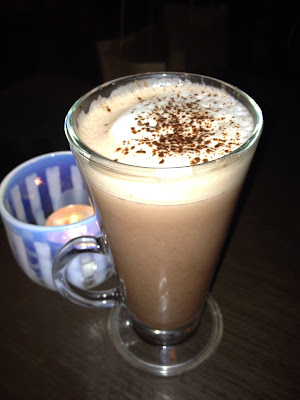 And, do you know what this isn't?  Sticky toffee pudding.  Manna claims it is: "sticky toffee pudding: manna's traditional favourite, served with brandied pecan vice cream & caramel sauce," but I tell you that it is nothing of the sort.  Blasphemy, really. 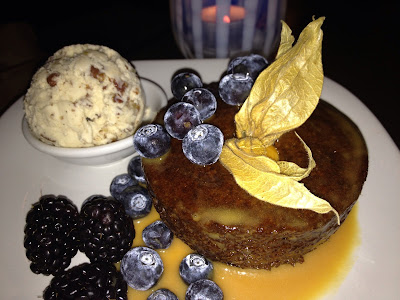 What it really tasted like was a boring, old, dry, rum cake.  CAKE!  And the ice cream?  Blech.  I know I'm spoiled, but this ultra-rummy, frozen dessert was good only in the sense that it moistened the unpleasant cake. 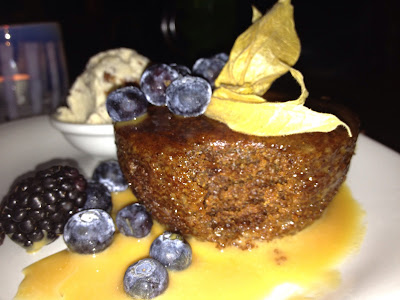 And, as I promised my traveling companion, I will say here what I said at the time, "What the eff is a tomato doing stuck in my rum cake?!"  I know that although it looks like a tomato, it isn't really.  I know this because the table next to us made the same distasteful exclamation and the waiter told them what it was.  It didn't matter, what mattered was only that it was unpleasantly stuck in my awful cake.  Oh, tibits; you rock even harder than I thought. 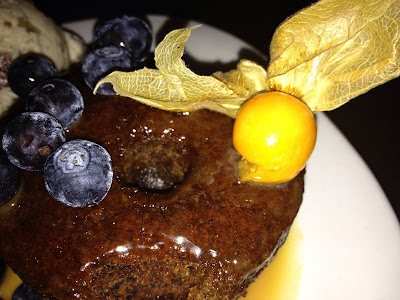 For the record, this is the bridge you walk over to get FROM THE NEAREST TUBE STATION to Manna.  It's neither far or a big deal, but my recommendation would be not to bother crossing it. 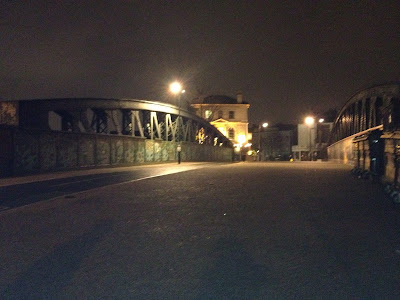 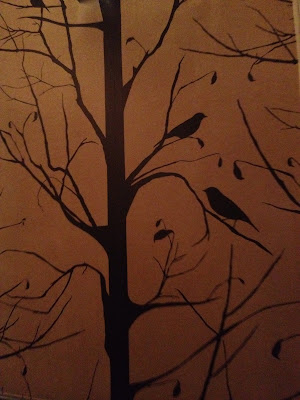 *London tip: Avoid phonebooths at all costs; they double as urinals.
Posted by Abby Bean at 11:39 AM