As you know, I recently conducted recipe testing for two highly anticipated cookbooks: one round was sammies from The Cinnamon Snail and the other Ethiopian food from Kittee Bee Berns.  The testing required a considerable investment of time and effort, but the return in skill, knowledge, and inspiration was astounding. 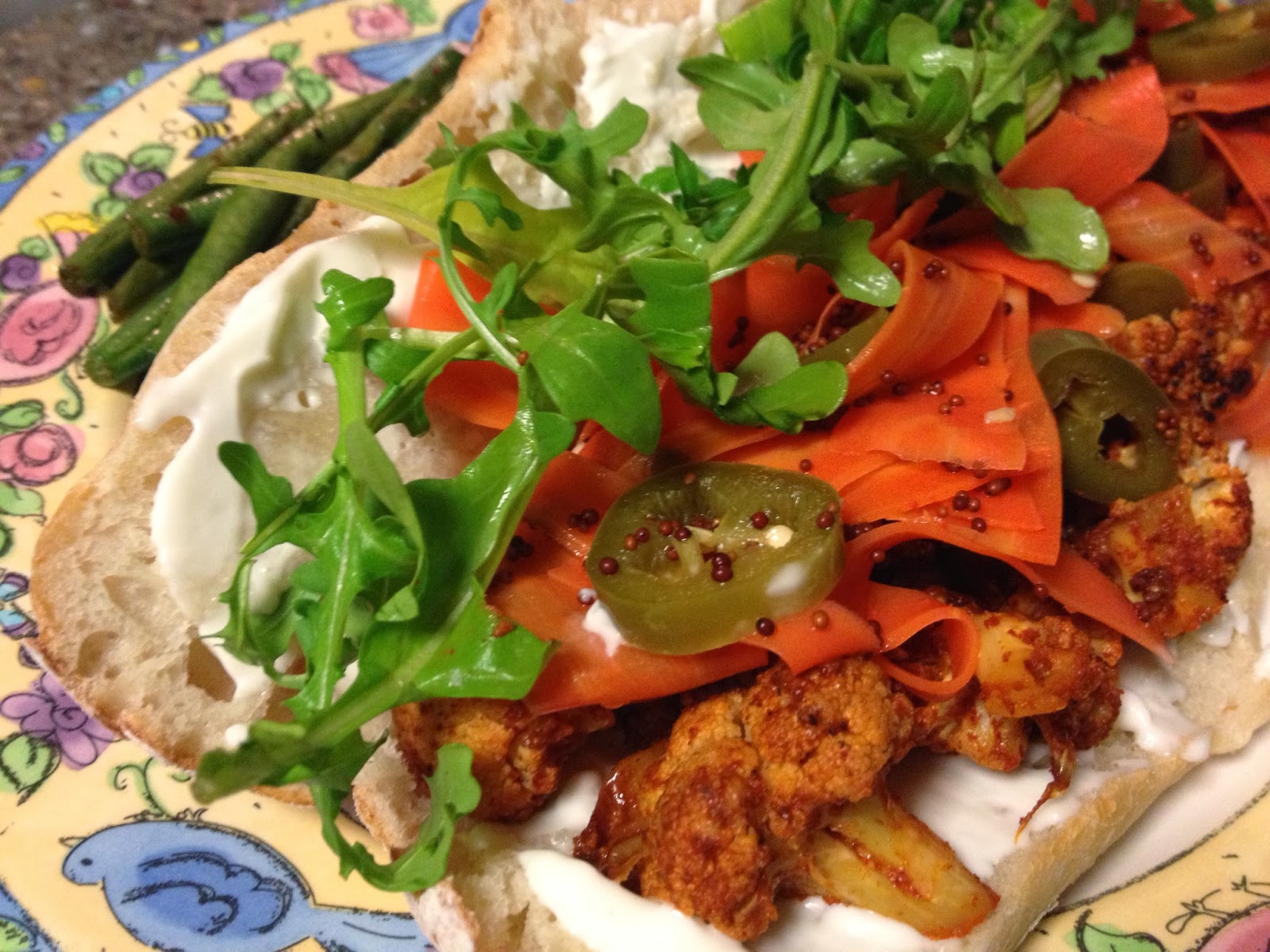 One recipe I was particularly enamored with was Kittee's awaze tofu recipe; I made it so many times that I didn't always have stews or injera on hand for accompaniment.


So when I spied a banh mi on Epicurious Vegan's instagram I had an epiphany.  Hint: it involved a baguette. 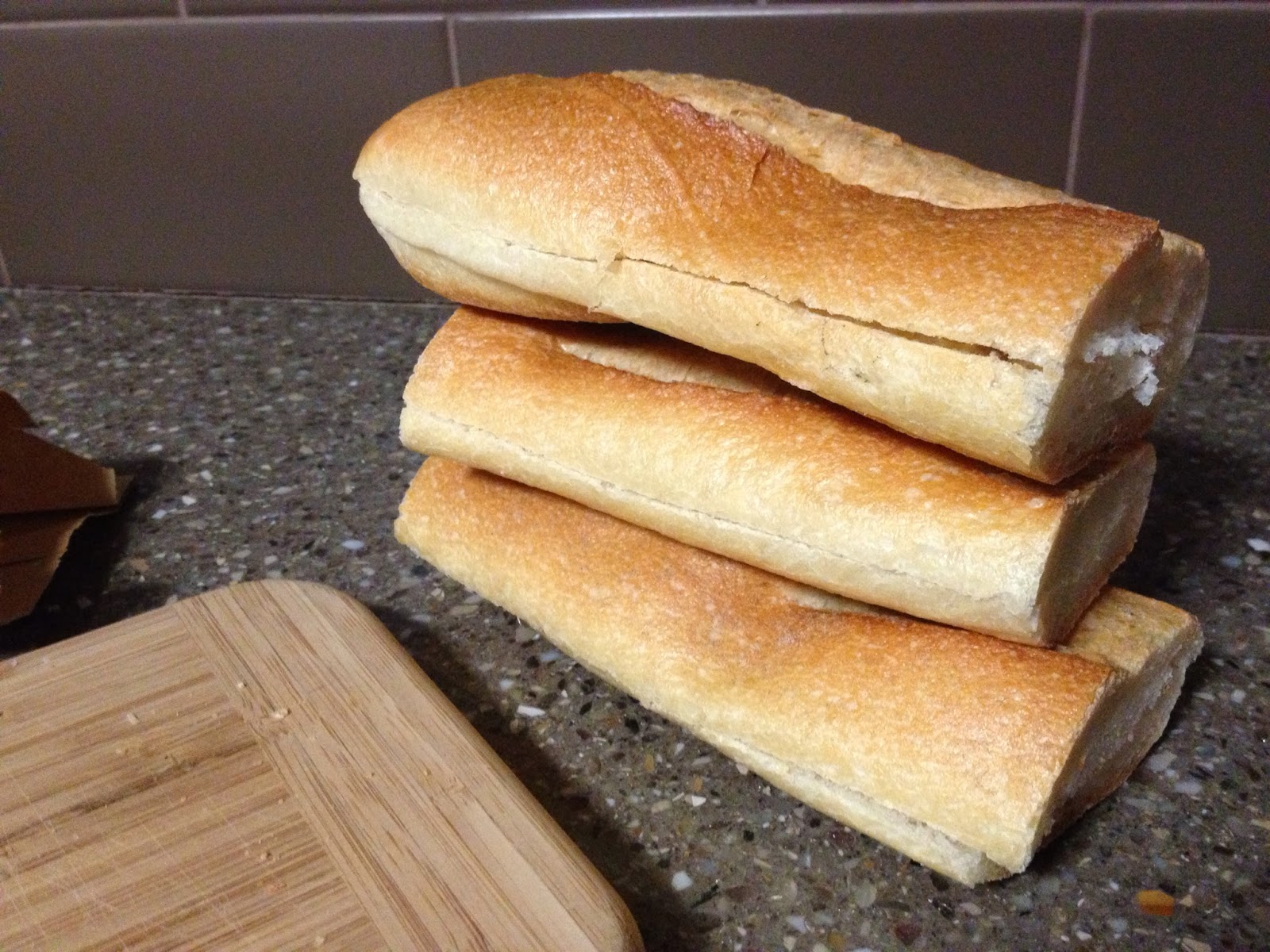 I immediately grabbed some carrots and jalapenos...


and got to pickling via The Cinnamon Snail method. 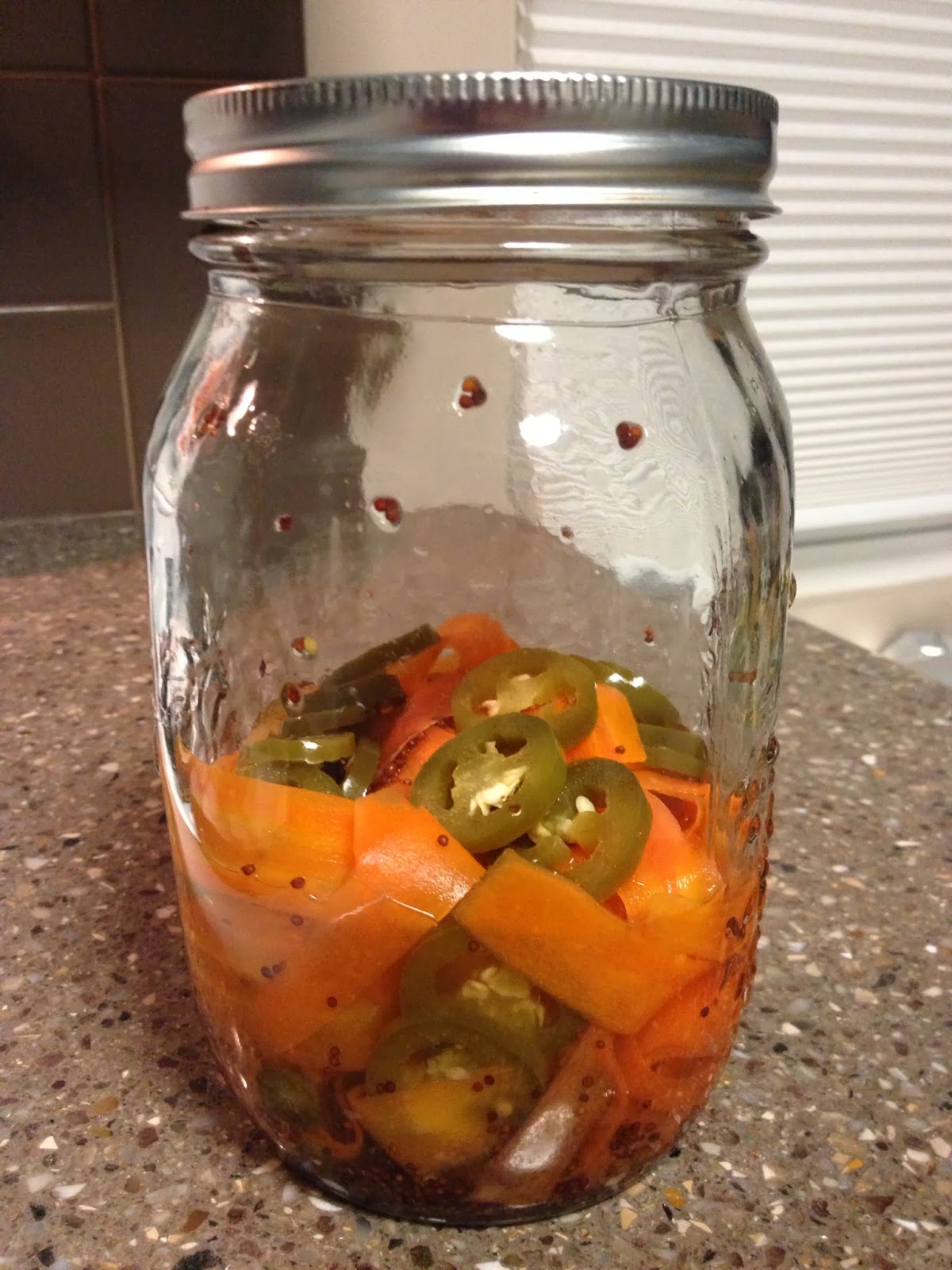 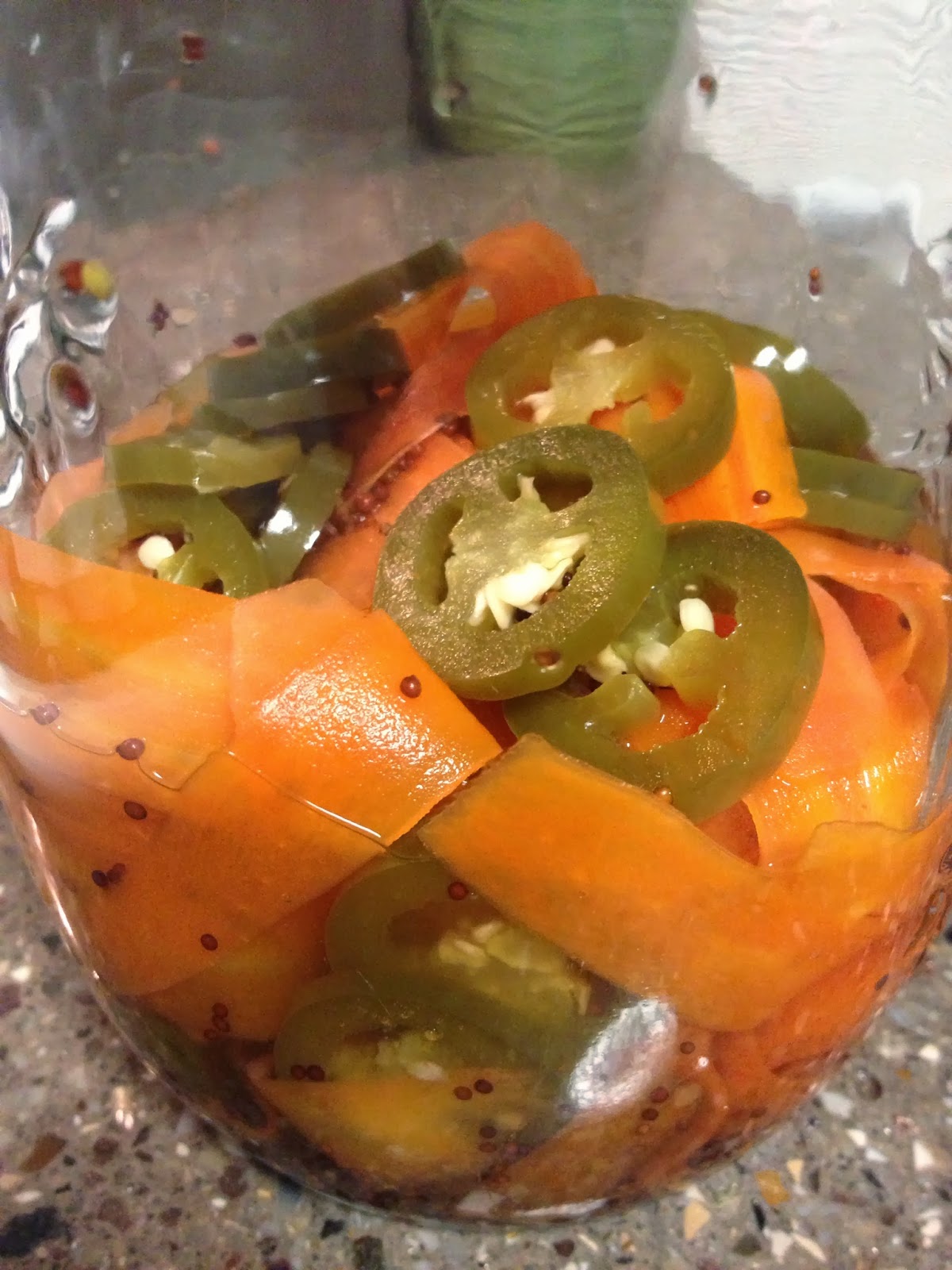 I grabbed some Vegenaise and excitedly assembled an awaze tofu banh mi. 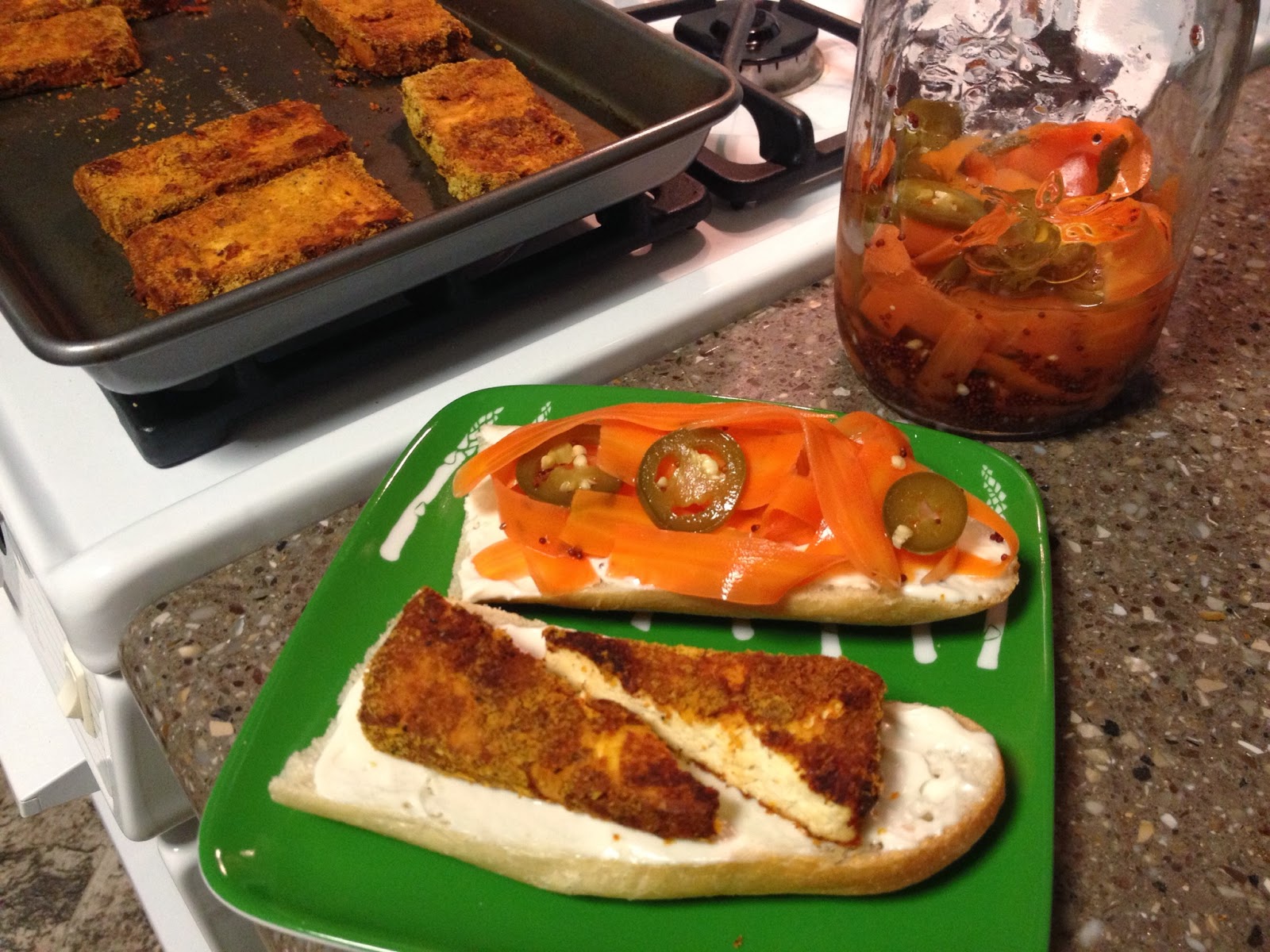 I'd had an uncharacteristically big lunch the day I planned the amazing fusion sammie for dinner, so when I realized how exquisite it was I found myself wishing I was hungrier just so I could eat more. 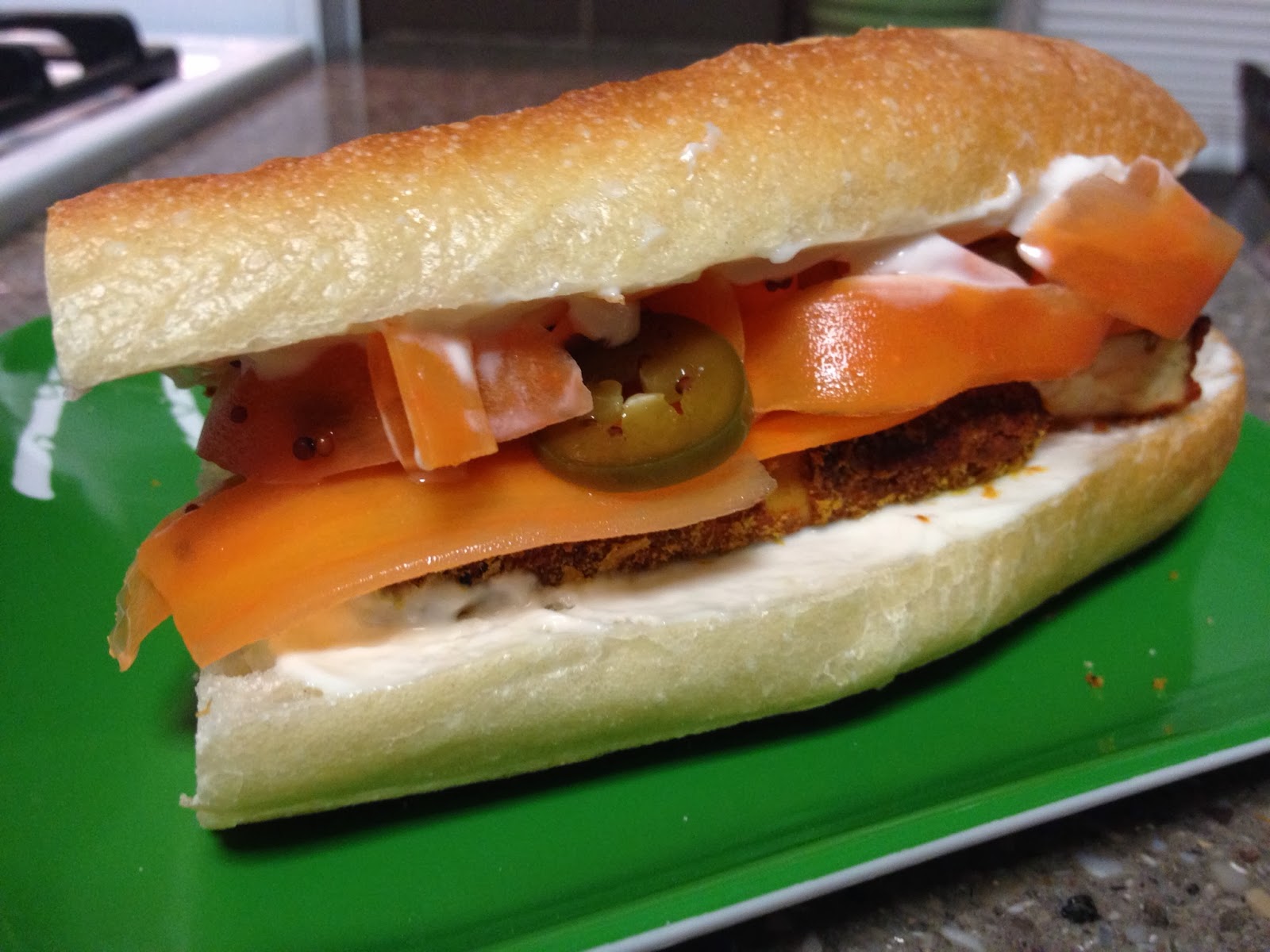 I had enough for plenty of sandwiches, but regardless of my adulations I can't get VM to eat tofu (it's all in her head). 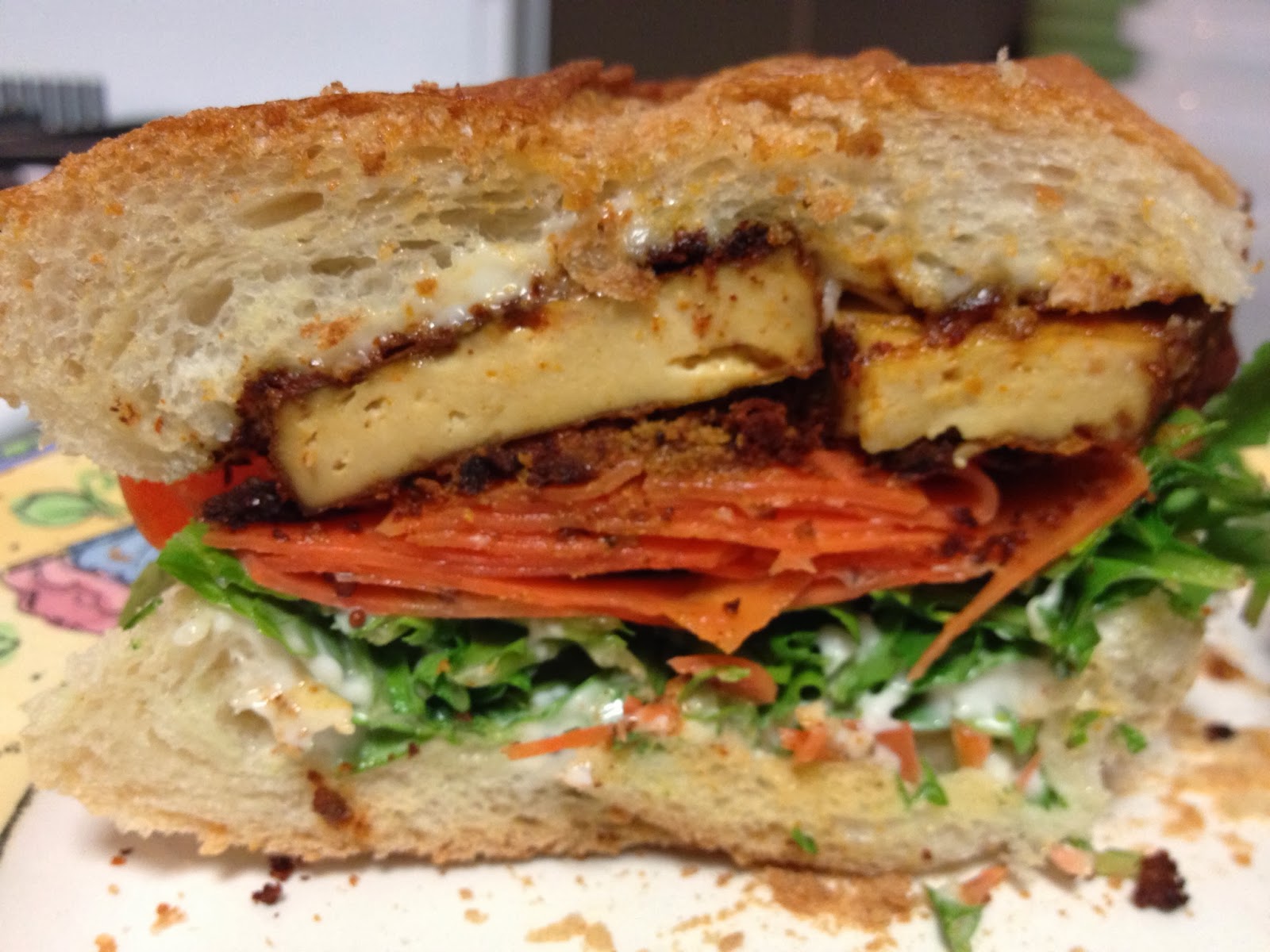 Timberly is kind enough to sub avocado in her sammies from the Snail, but I didn't think avo would work in this instance.


And then I considered cauliflower.

How I had not already made the association when we are both so enthralled by the illustrious cauliflower banh mi from Sprig and Vine, I can't tell you.  But, I got to work immediately.

I cut a medium head into small florets and included the stems chopped into smaller cubes (That's for GS/VCC!).


Then I tossed the florets in the marinade and other ingredients used in the awaze tofu. 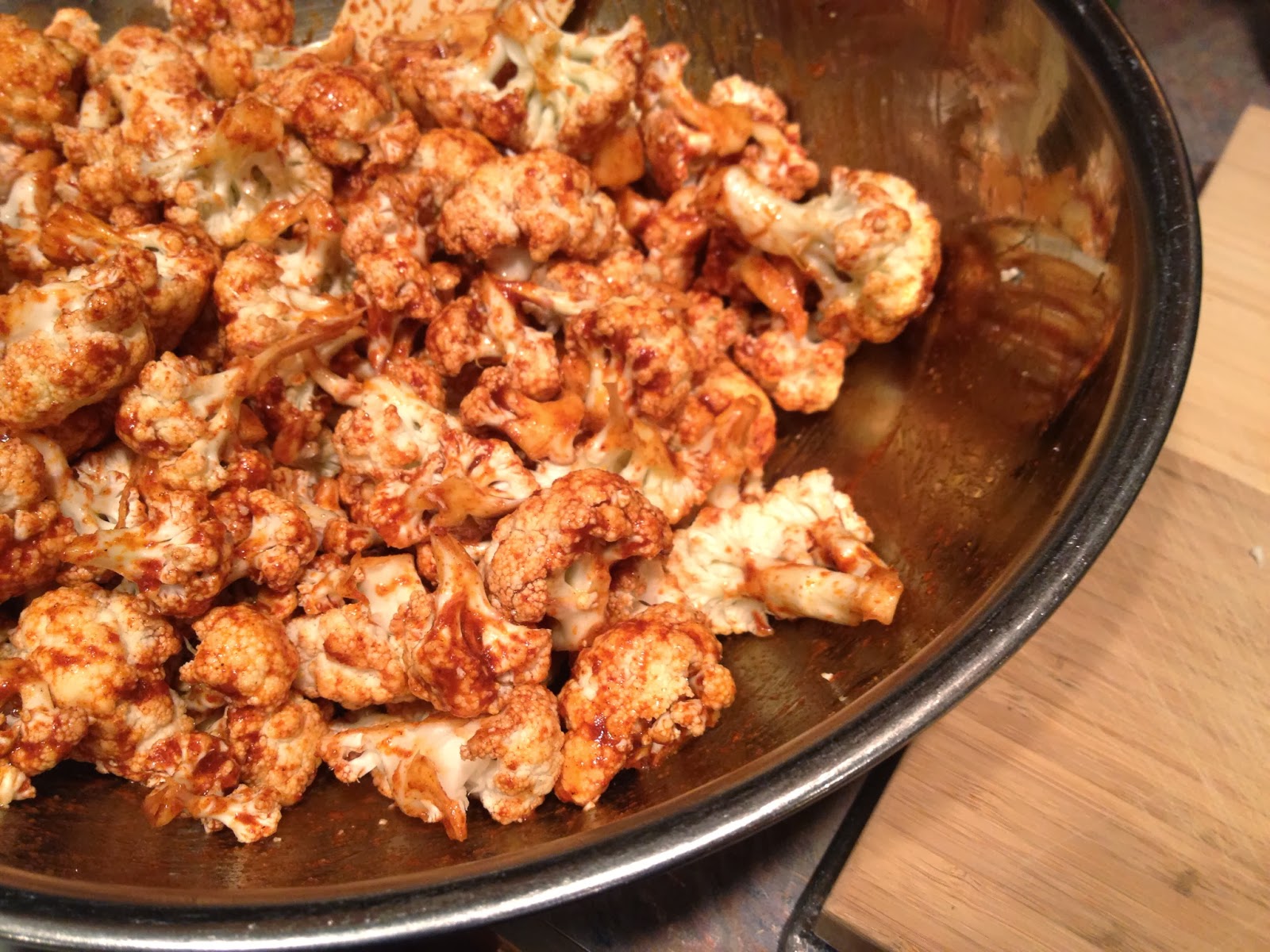 I roasted the cauliflower for 40 minutes in a 400 degree oven on a lightly oiled pan, stirring every ten minutes.  Warning: the sauce may burn onto the pan a little, so when you open the oven there may be a considerable amount of smoke expelled.  I'm not saying this will definitely set off the smoke detector, but it could.


I assembled the cooked cauliflower with the same pickled carrots & jalapeno and Vegenaise- this time also adding arugula. 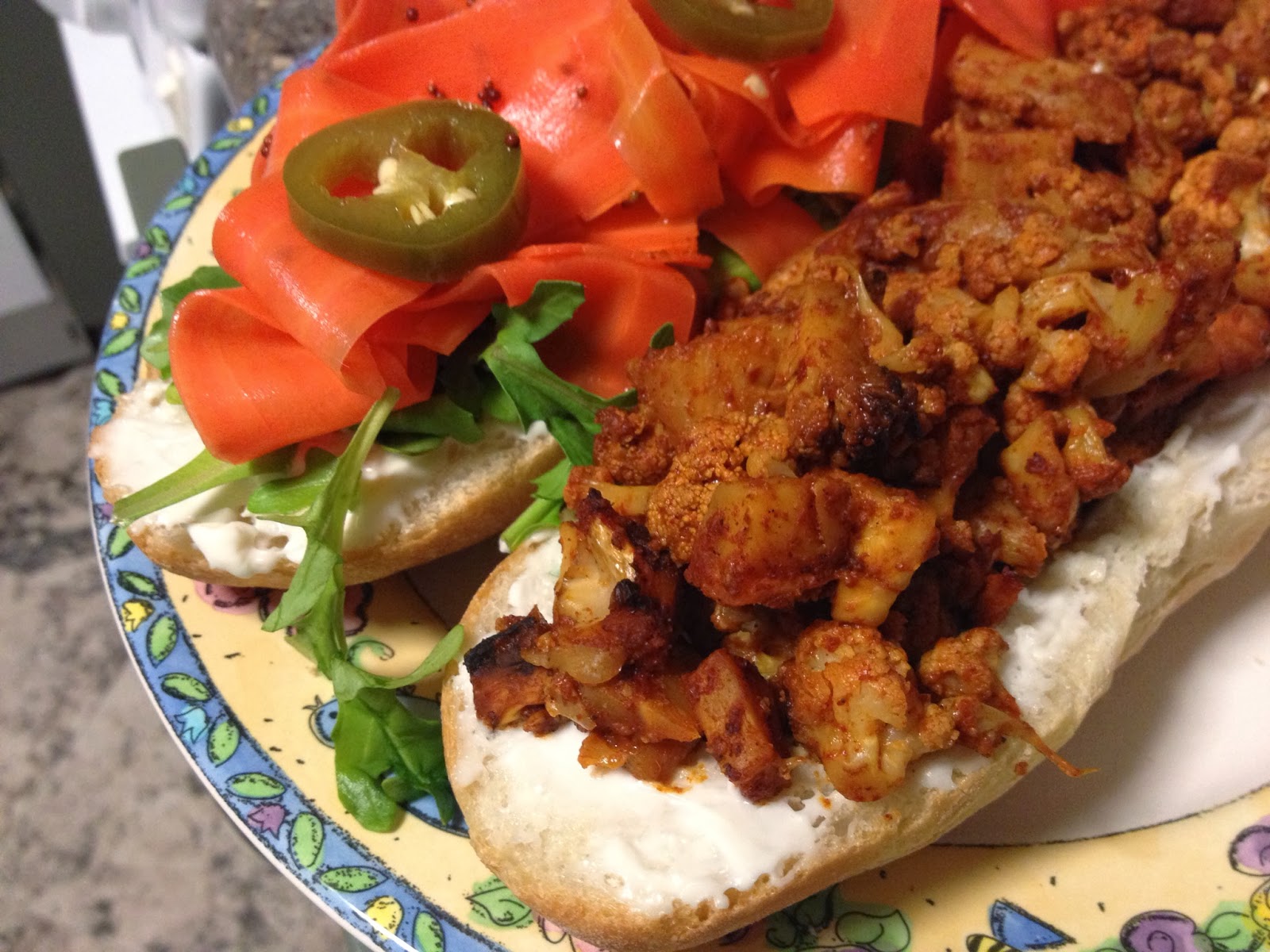 I dare not venture to guess how the Sprig & Vine cauliflower banh mi is prepared, but this was equally decadent.  I really impressed myself.

It was so good that I did it all again for dinner guests, this time with home-made bread! 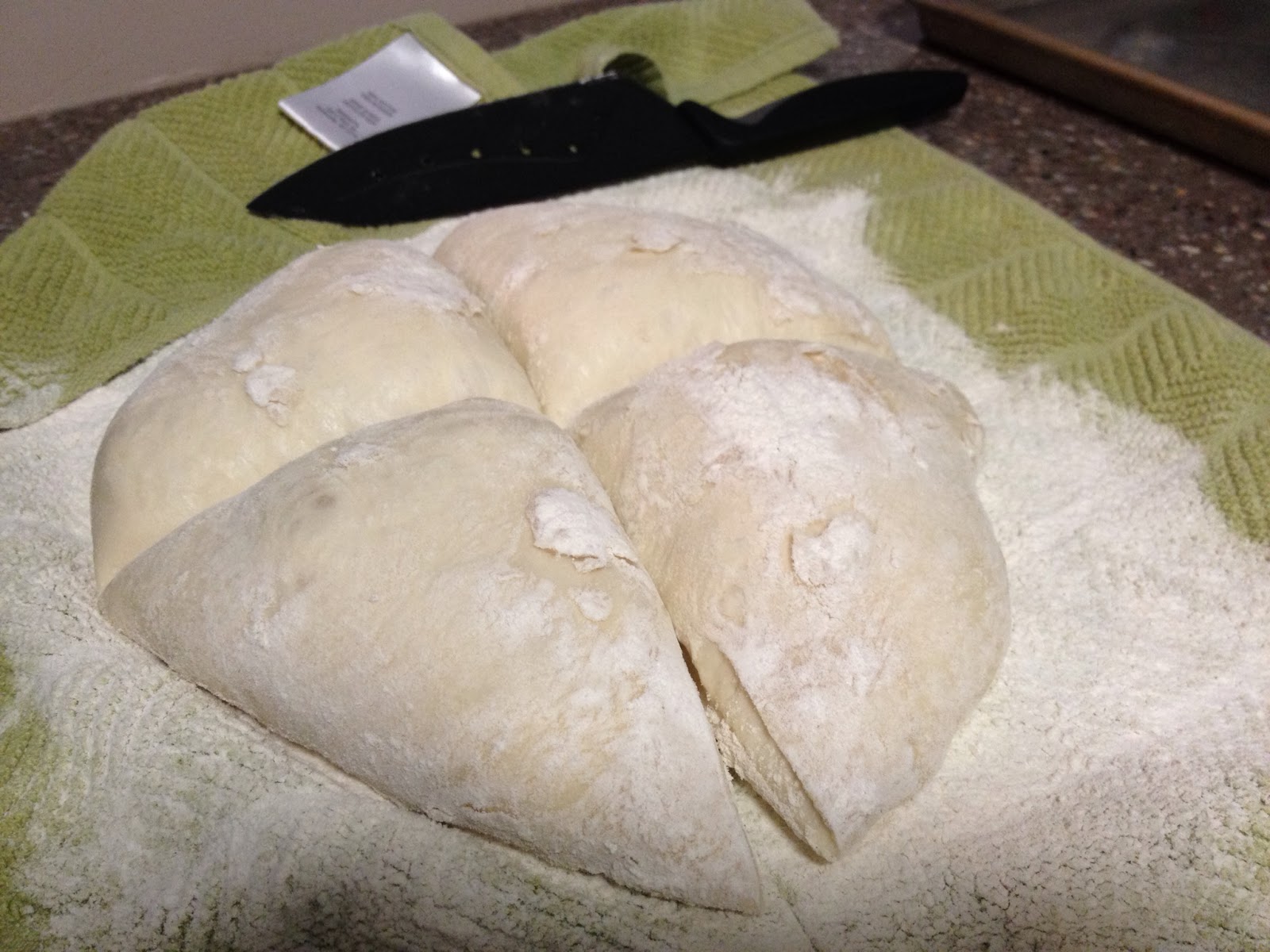 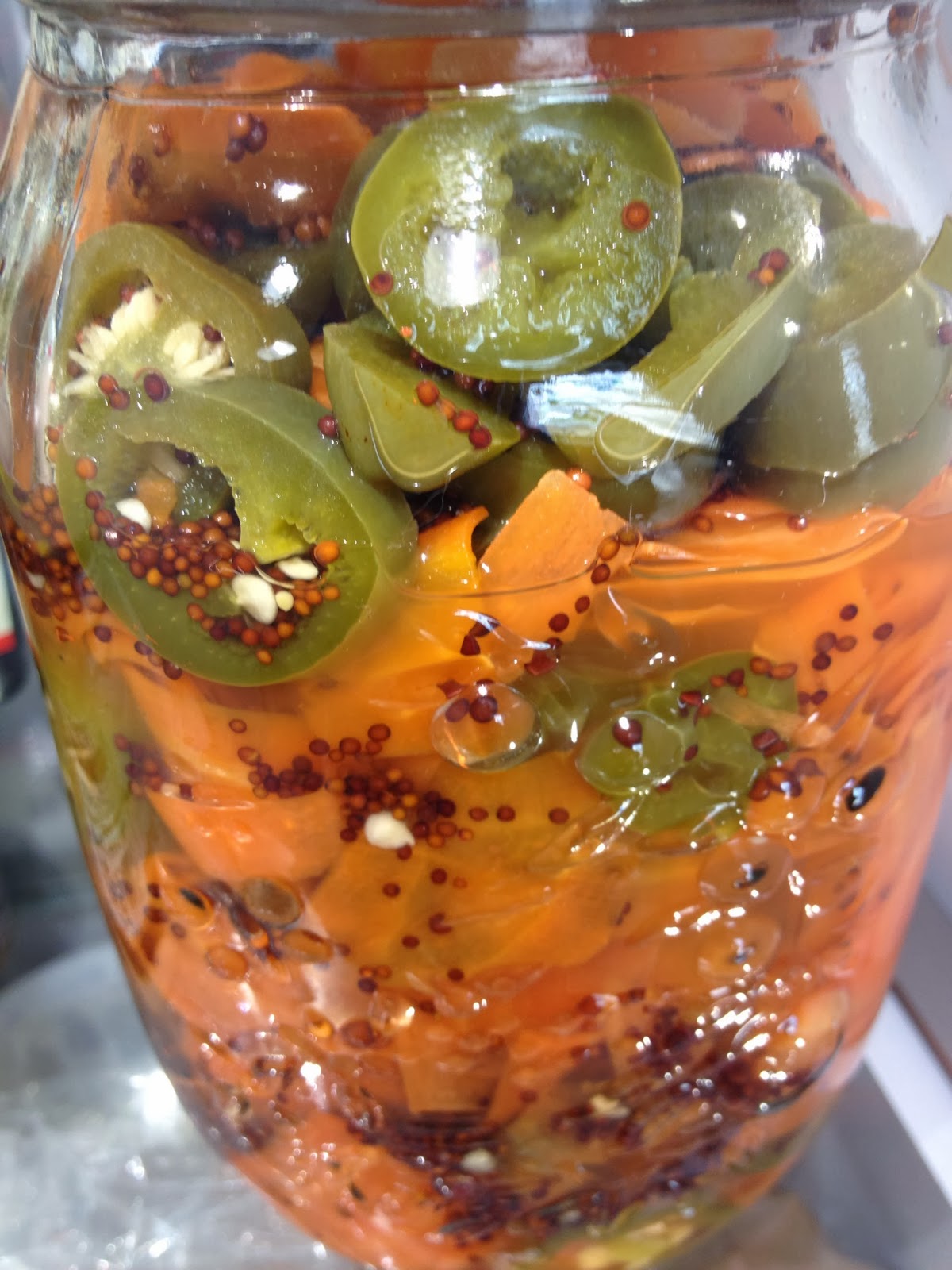 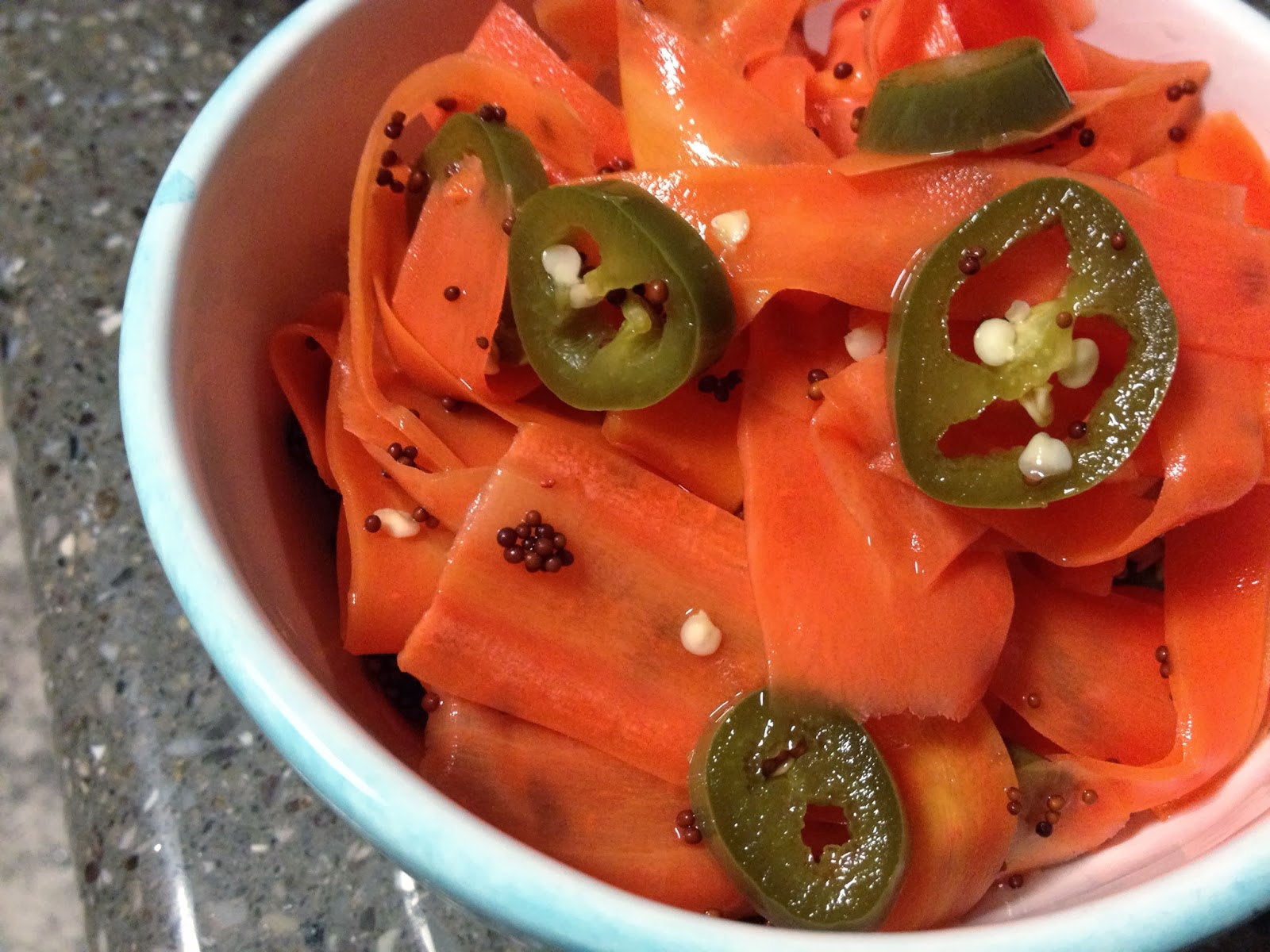 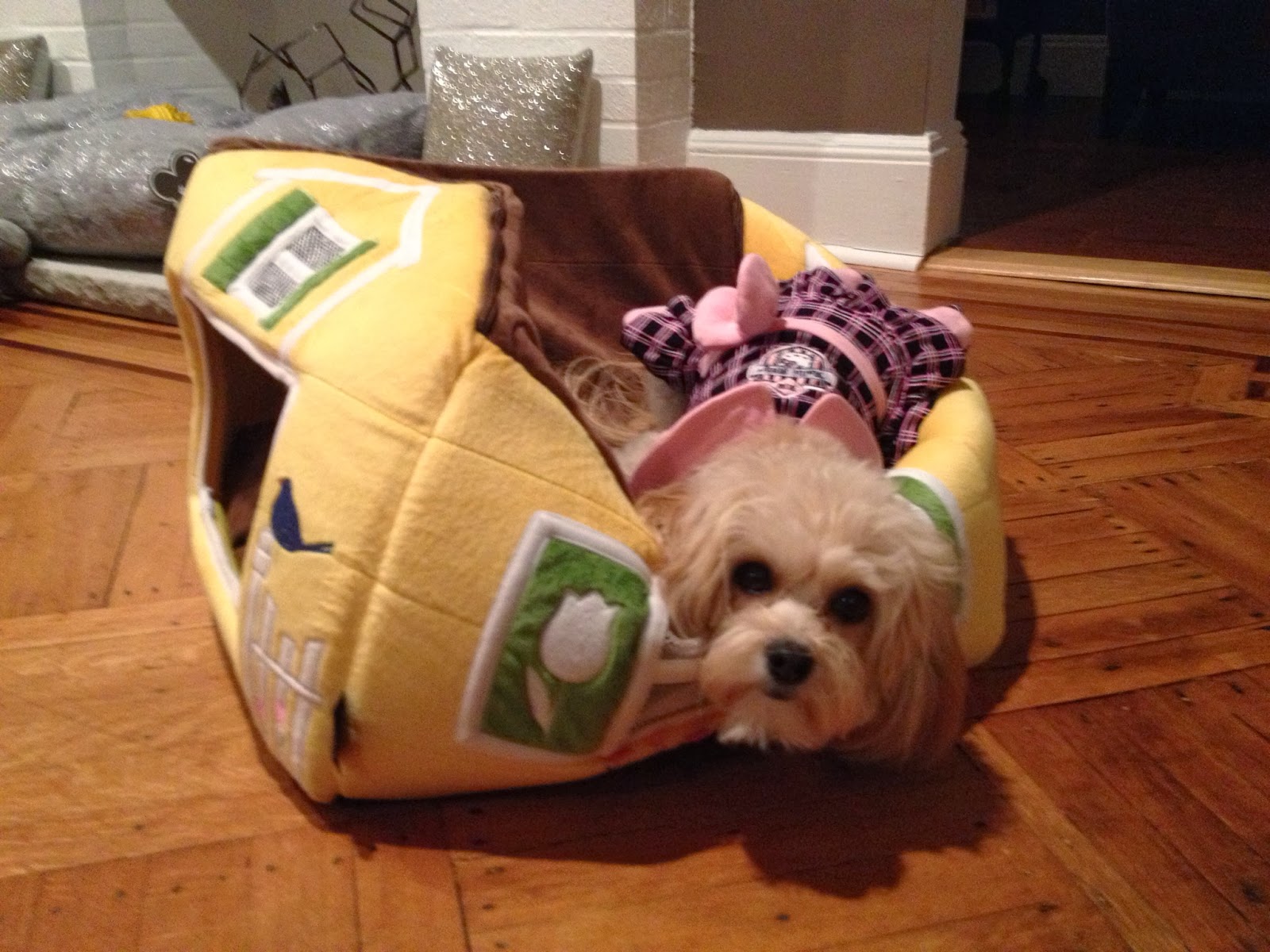 And a build-your-own sammie presentation (with string bean accompaniment):


It was another delicious success: 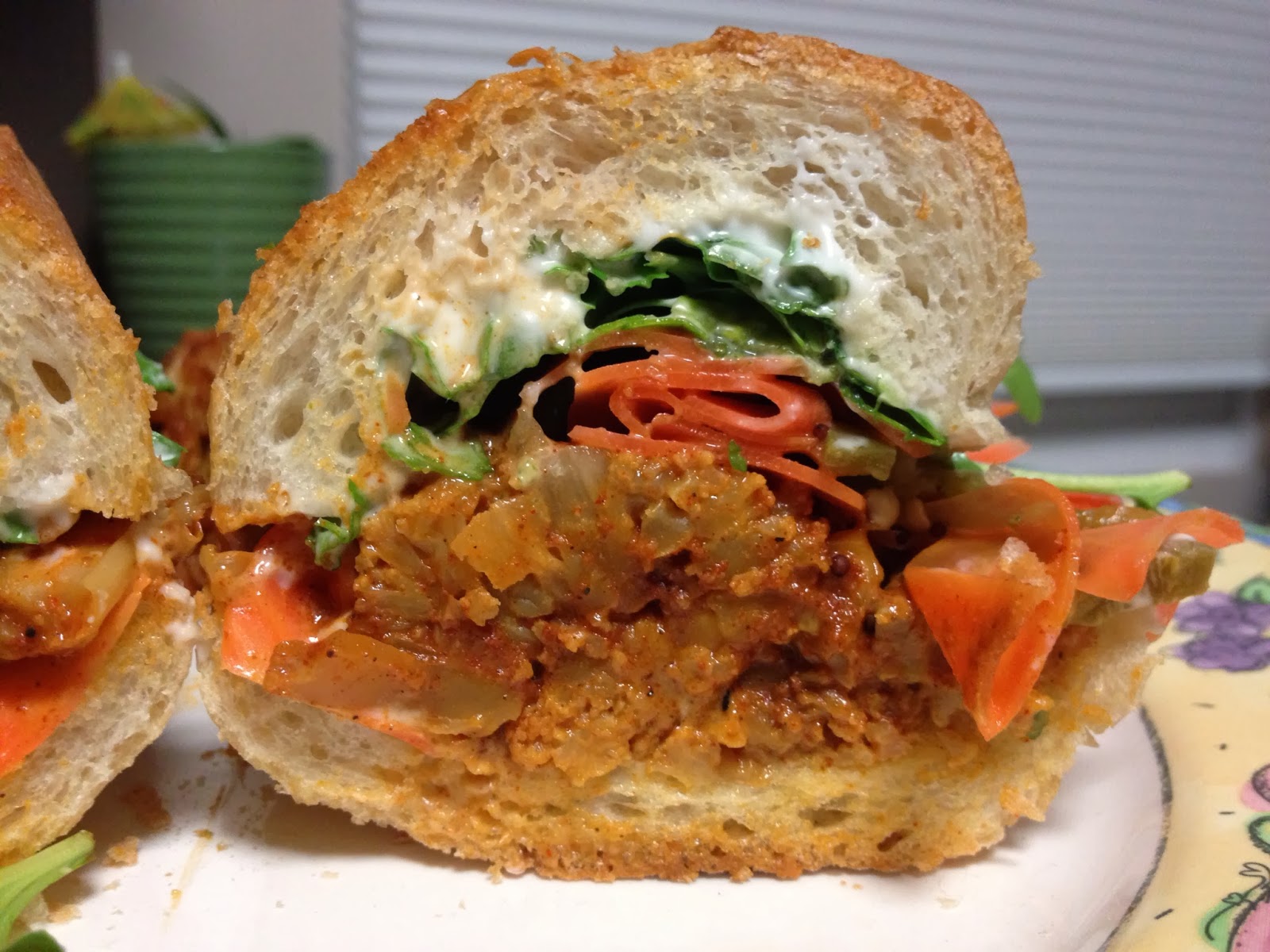 I sincerely hope you're all waiting for these cookbooks with as much anticipation as I am. 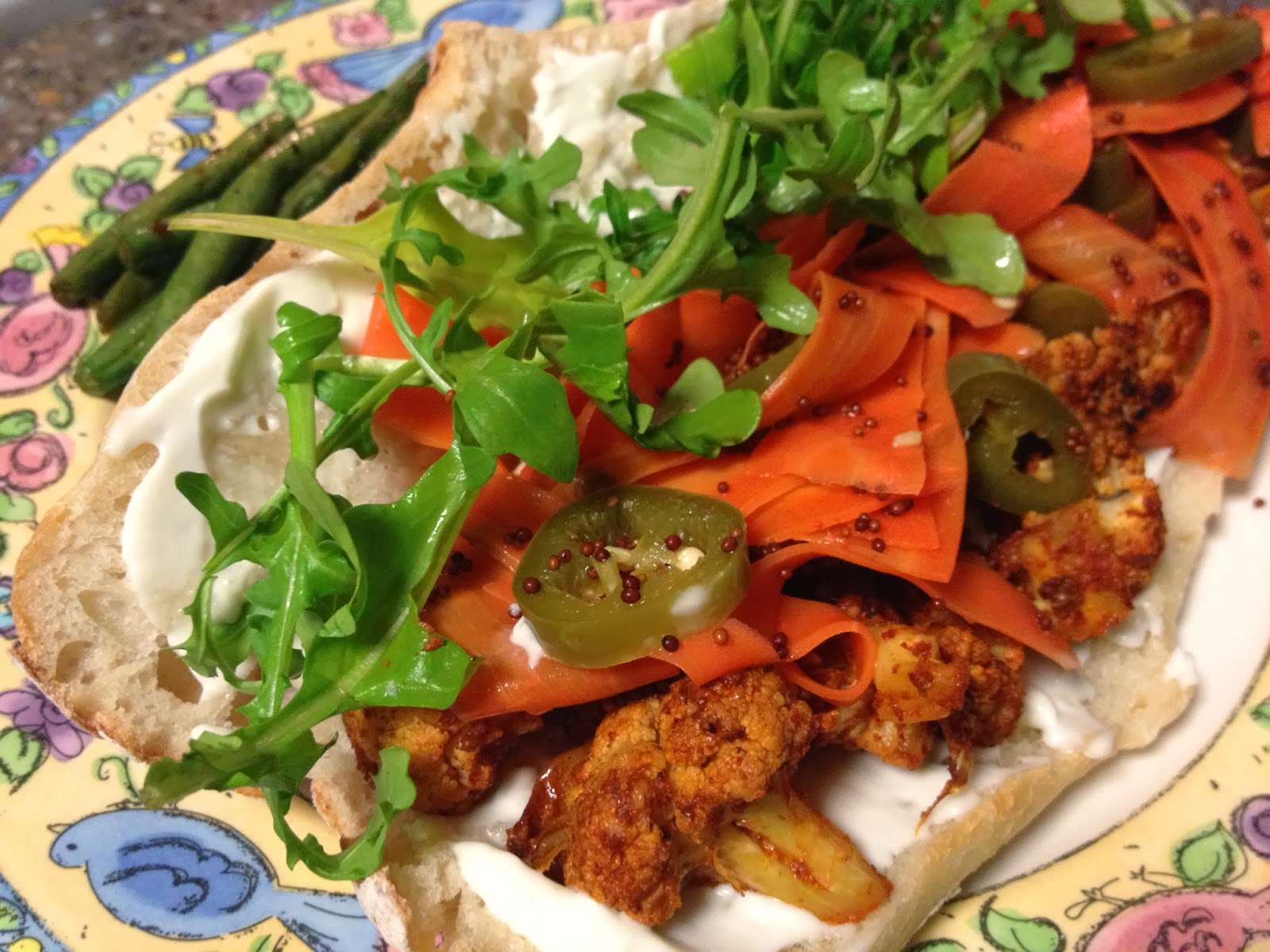 It will definitely be worth the wait.