Very shortly after reading Yum Veggie Burger's review of their original mix, I stumbled upon one of the creators of neat, Phil, doing a demo in a healthfood store.  We spoke for a short time about the extremely creative ingredients and how easily veganizable the preparation is (it's a vegan product that calls for eggs or vegan "eggs" to prepare), but by the time he was ready to pass out samples I was running late and could only grab one on my way out; I didn't have a chance to mention how intrigued I was by the unique texture and appealing flavor and how anxious I was to try more.  Lucky for me I was contacted shortly thereafter by neat's director of marketing and social media to do a review; before I knew it I had one of each variation awaiting my experimentation. 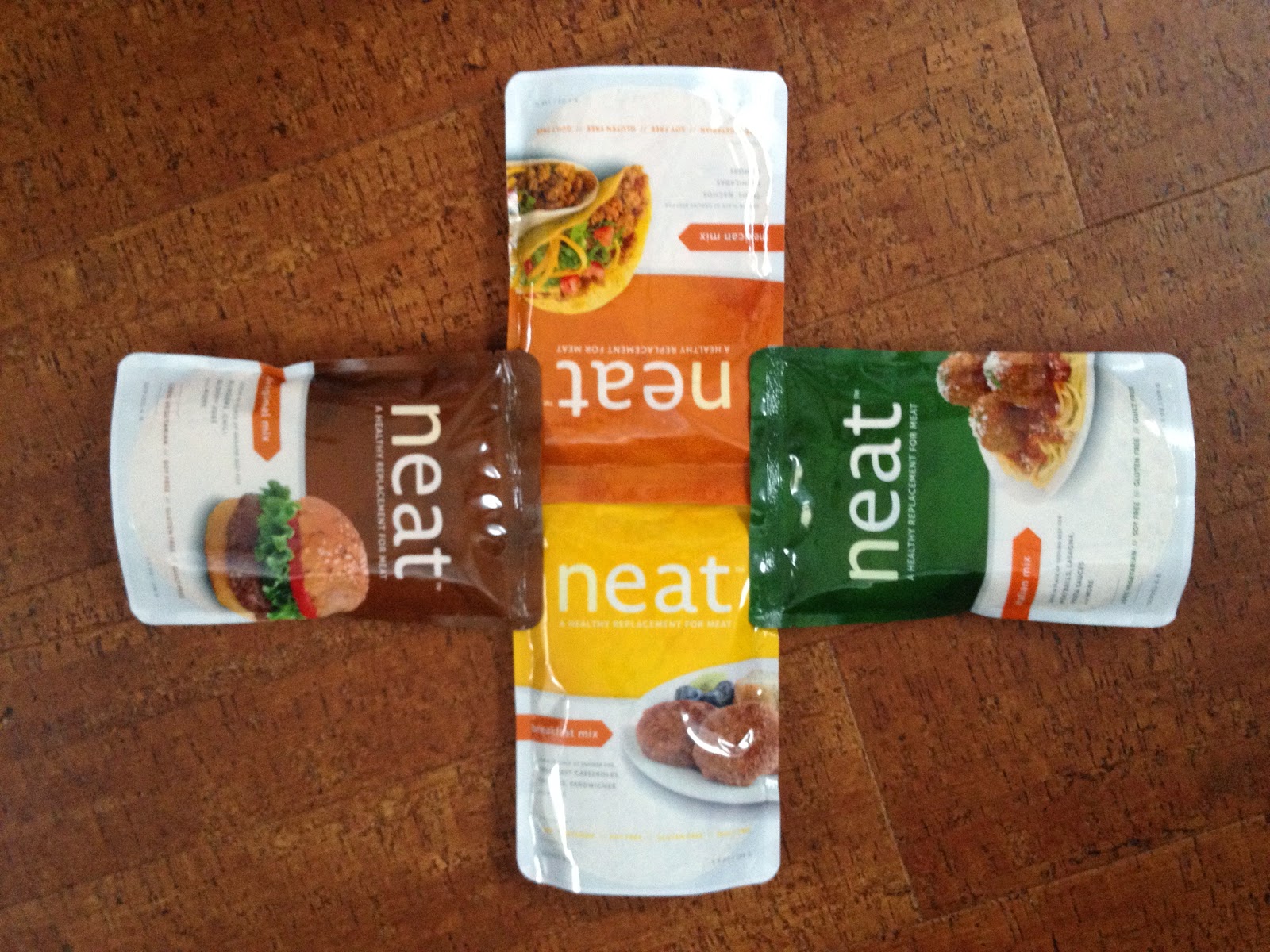 The first thing I wanted to make was nachos; that called for the mexican mix. I followed the directions that are simplified on the back of the package, 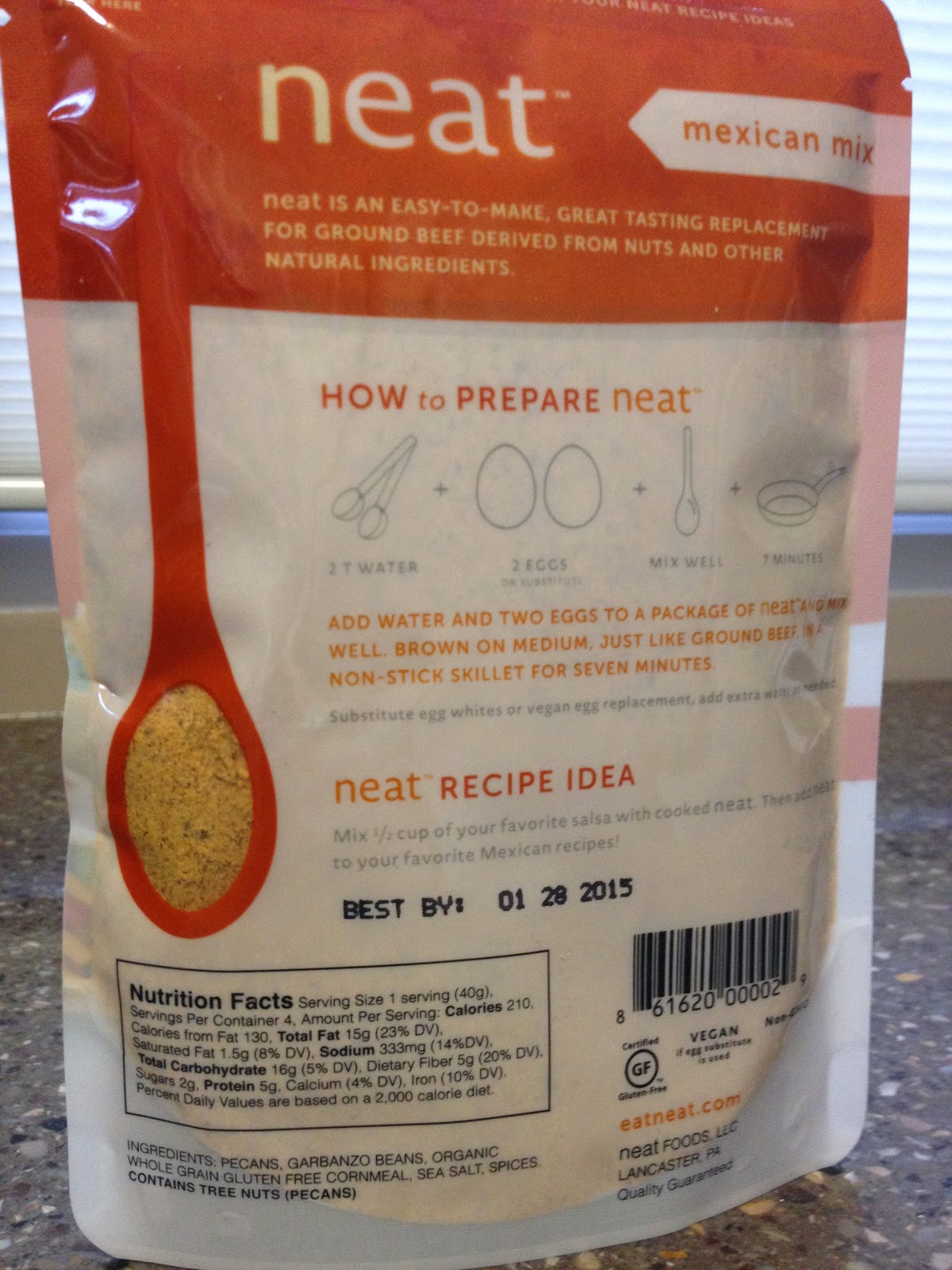 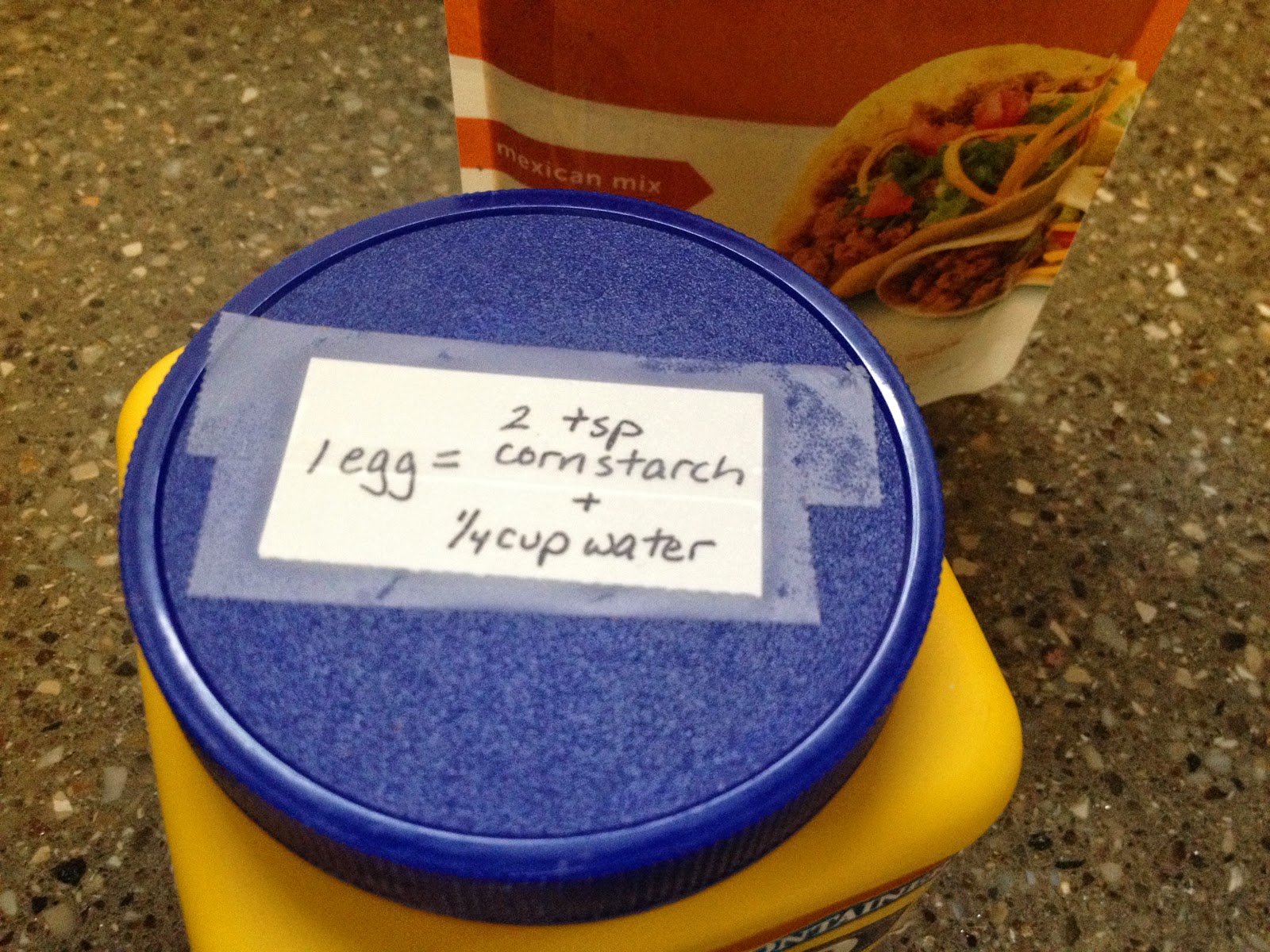 This is the mexican mix right out of the package (before I stirred it with the water and vegan "eggs): pecans, garbanzo beans, organic whole grain gluten free cornmeal, sea salt, spices. 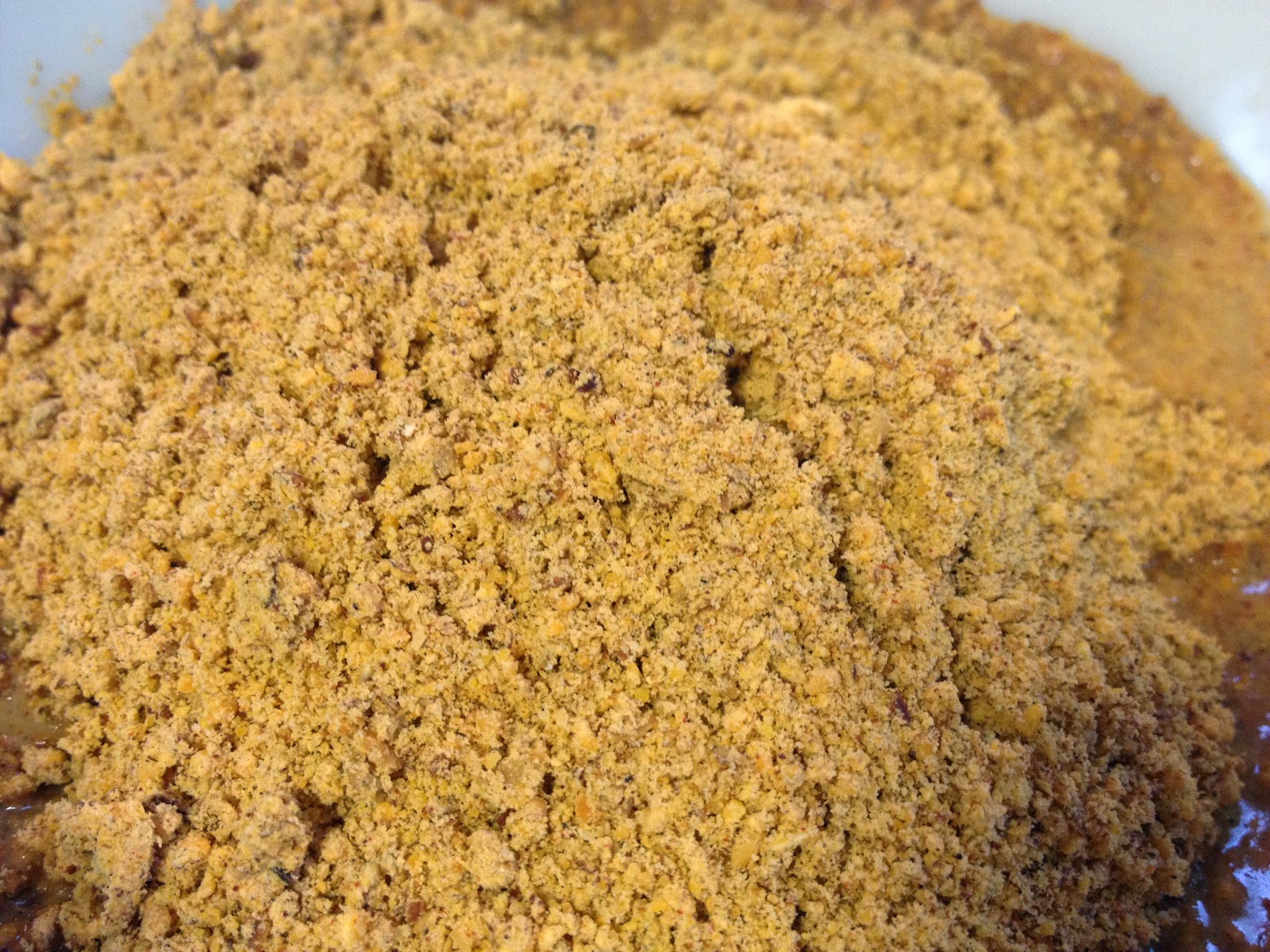 Here it is mixed. 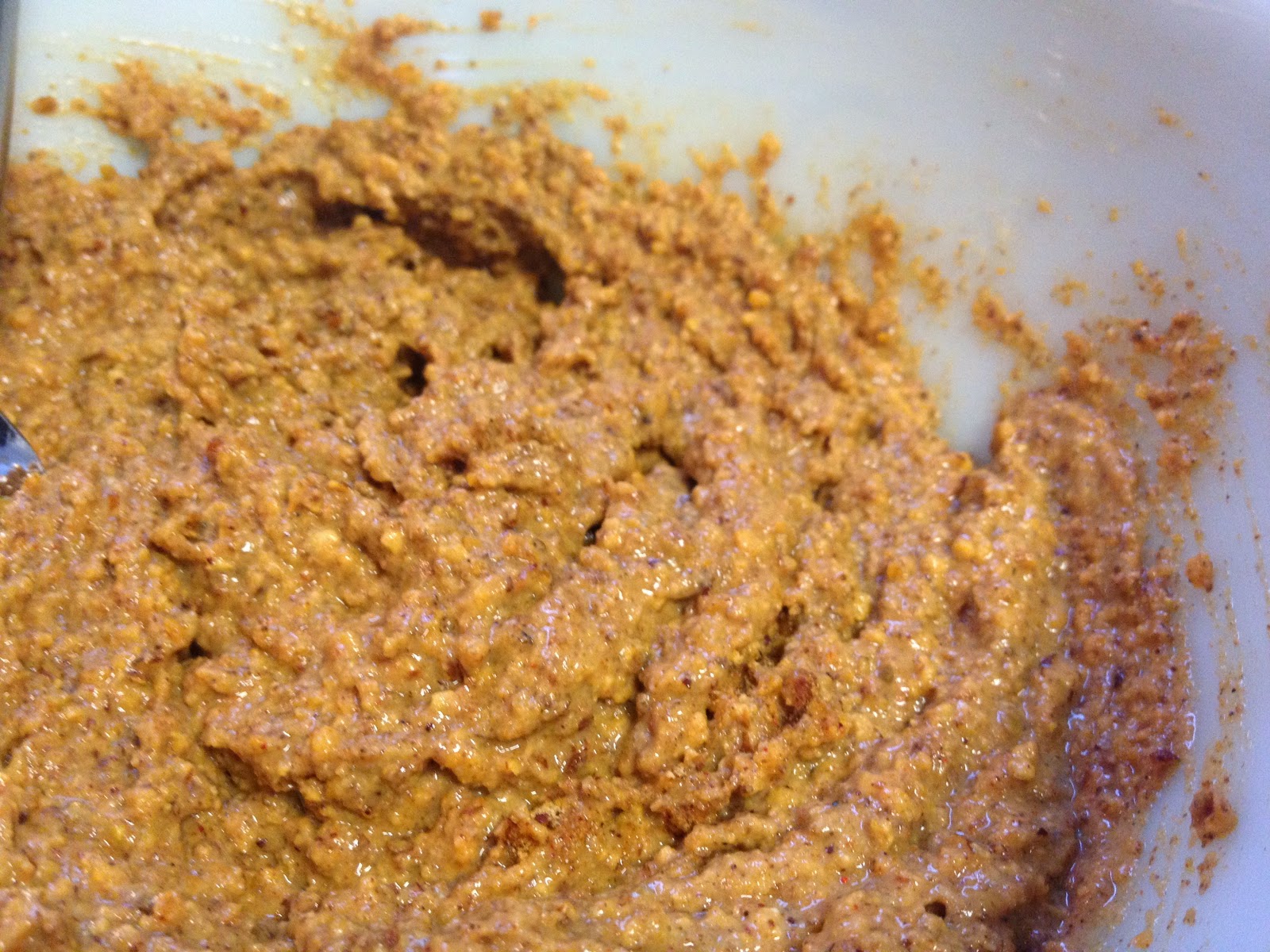 I started by sauteing two small, roughly chopped onions in a pan, then added the neat mixture.  It clumped up with the onions, but loosened up appealingly as it browned. 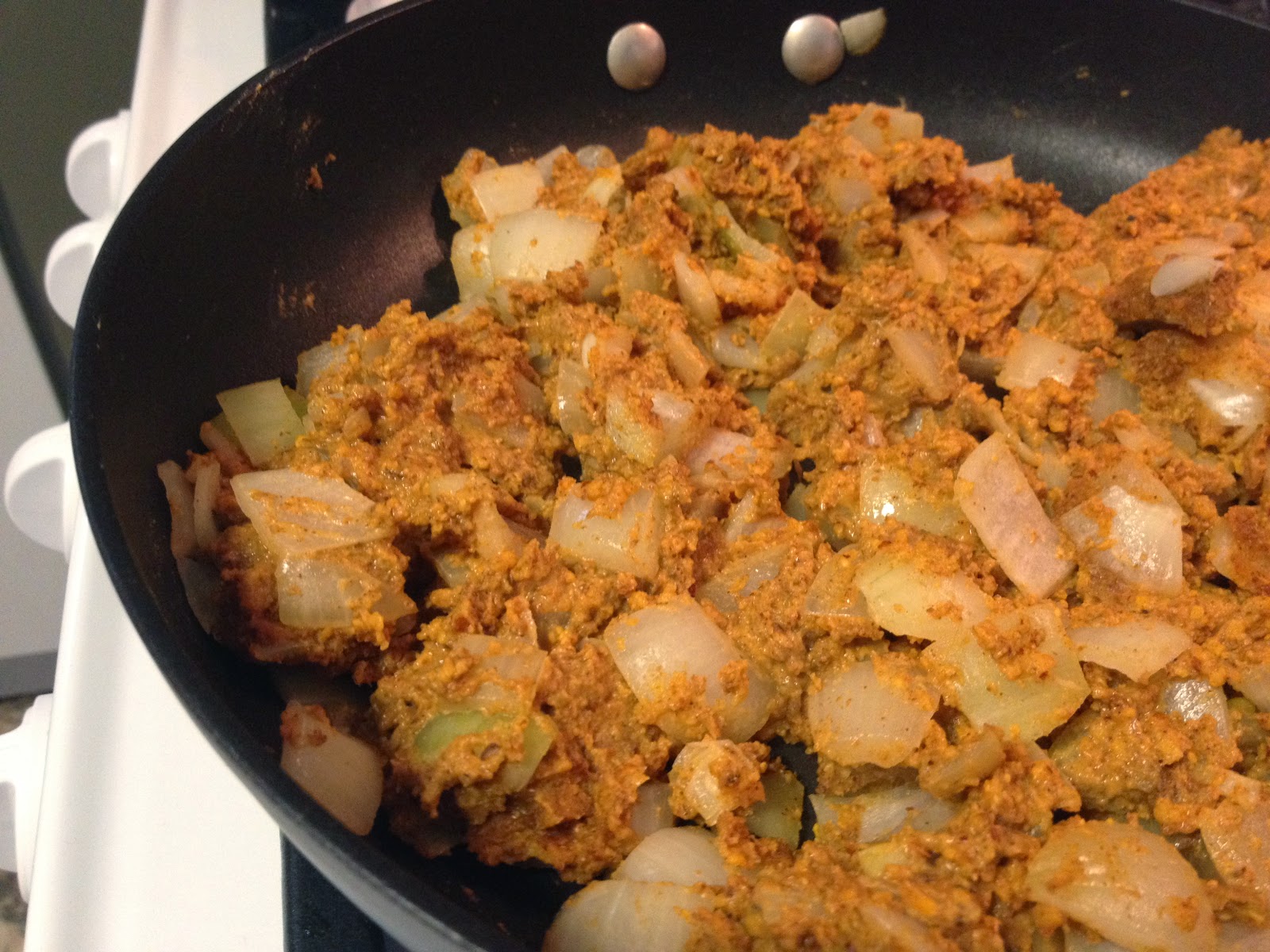 After the advised seven minutes it looked pretty good, but even 89 felt something was missing. 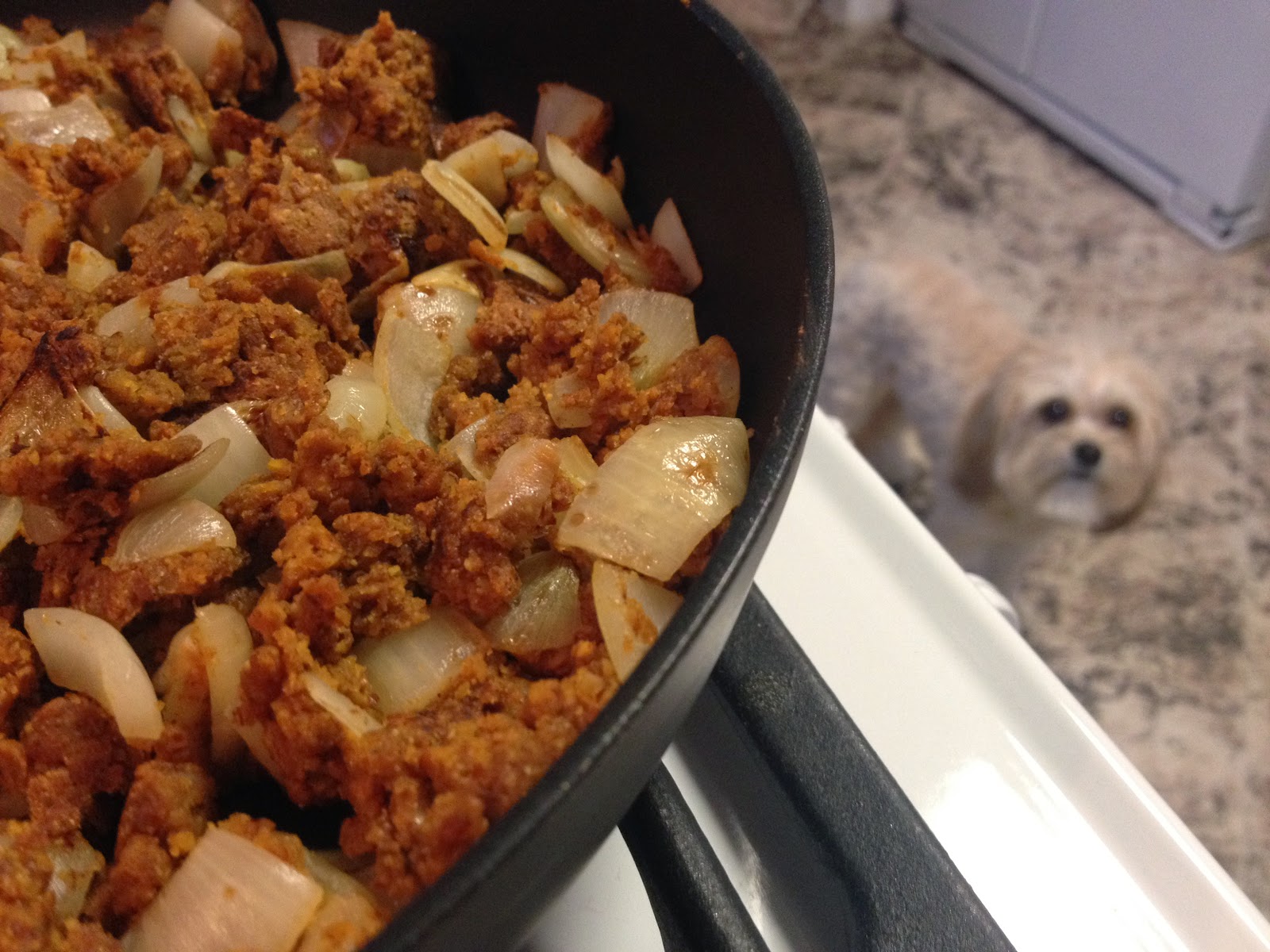 Since I knew Phil had mixed in some vegan cheese during his demo, I decided to do the same; 89 seemed infinitely more intrigued. 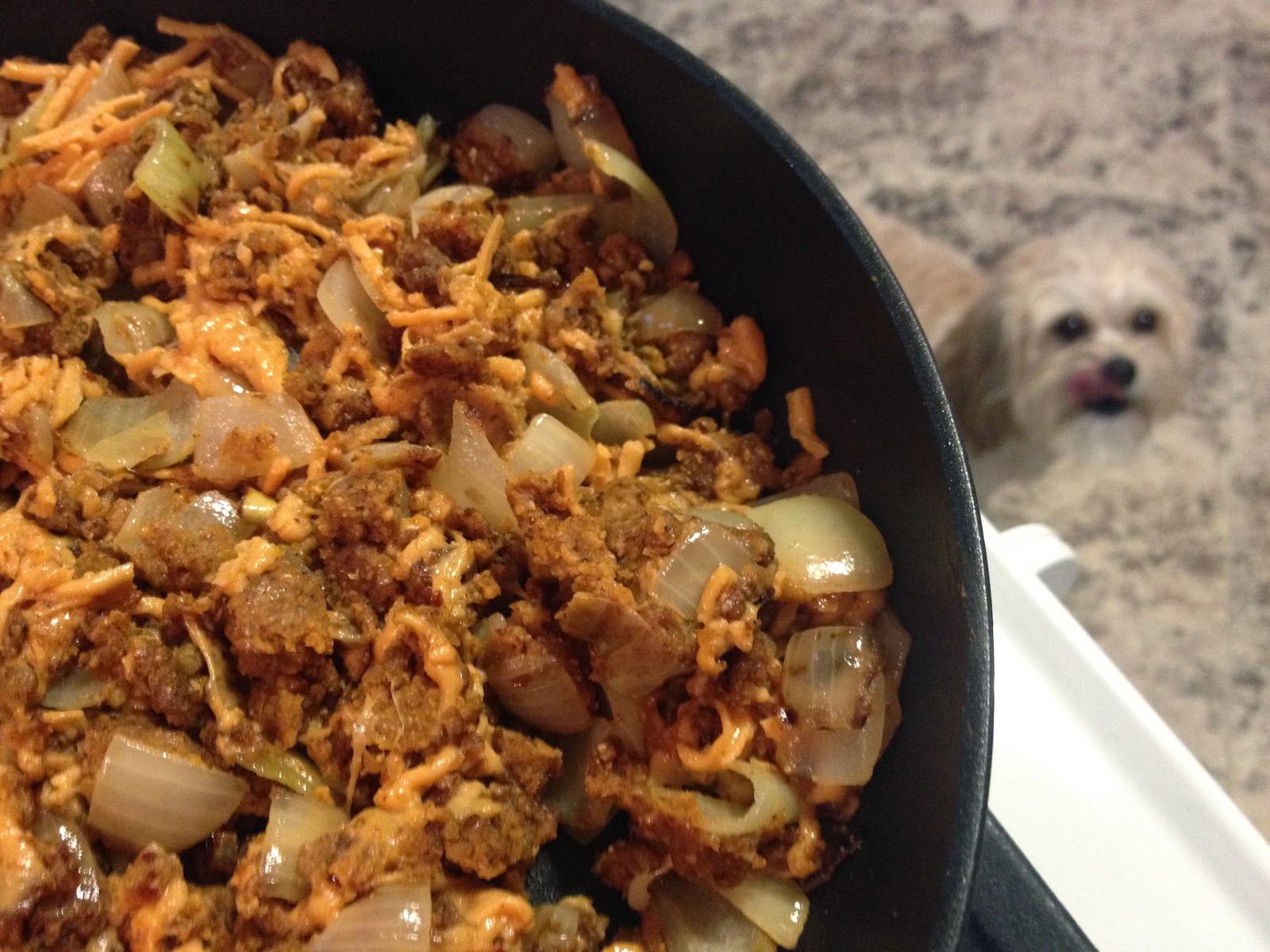 Once the cheese was melted, the whole pan looked and smelled extremely appetizing.  So, I unceremoniously piled the concoction onto a pile of tortilla chips and layered with fresh tomatoes (instead of mixing in the suggested jar of salsa) and banana peppers for a big, messy plate of nachos. 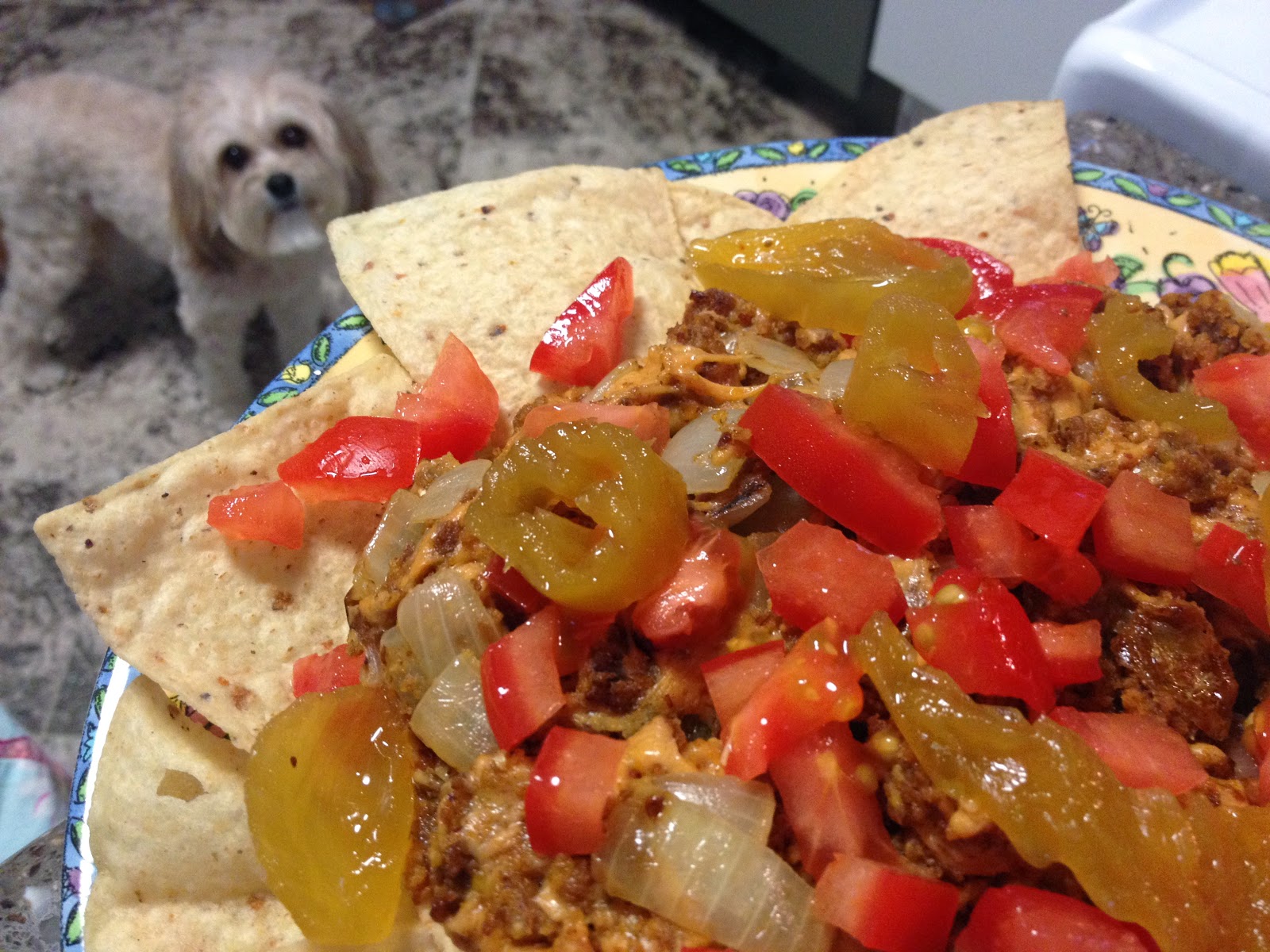 It was DELICIOUS!  I realize that it was invented to be a meat substitute, but as someone who normally eschews that type of thing, I really enjoyed it immensely and didn't find it characteristically meaty in any reasonably off-putting way.  In fact, the texture reminded me of something that I still haven't been able to put my finger on: perhaps a variation on a more substantial lentil walnut pate?

I then portioned the remaining dish (it reheats wonderfully) into appetizer bites for some vegetarians and omnivores to sample; it impressed everyone and not one person even came close to guessing it was nut-based. 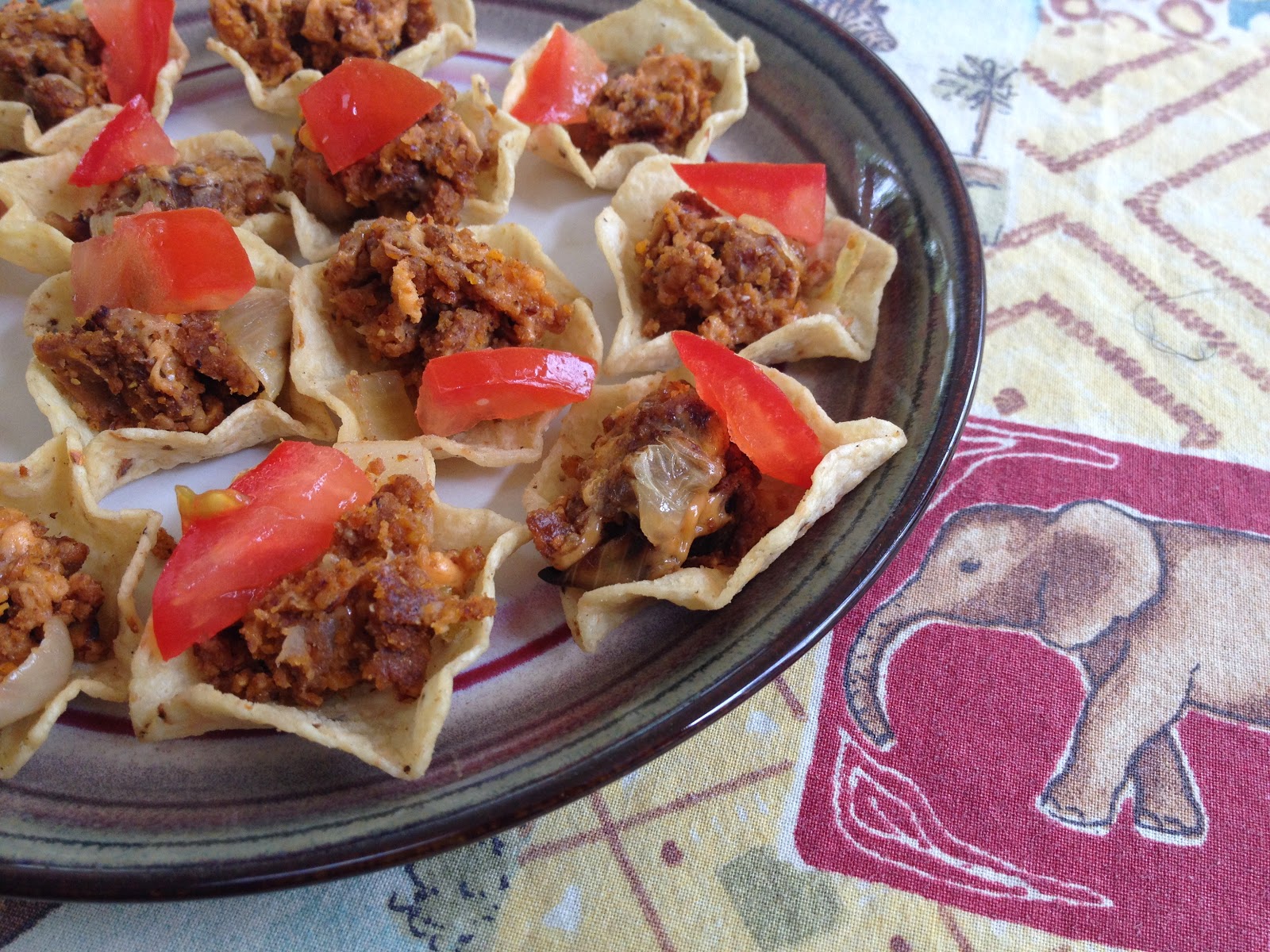 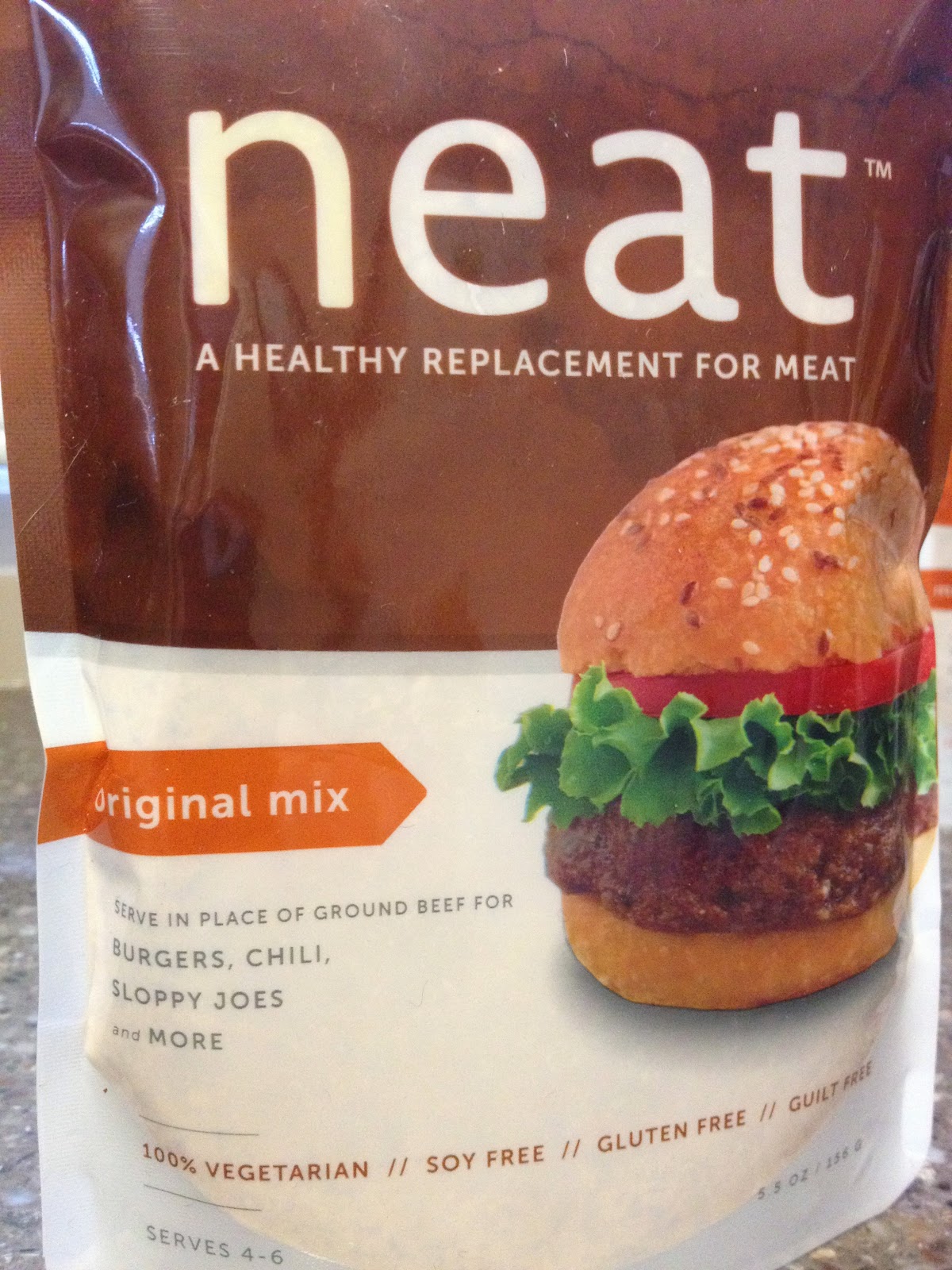 I pulled out my trusty box of old-skool EnerG egg replacer for this one. 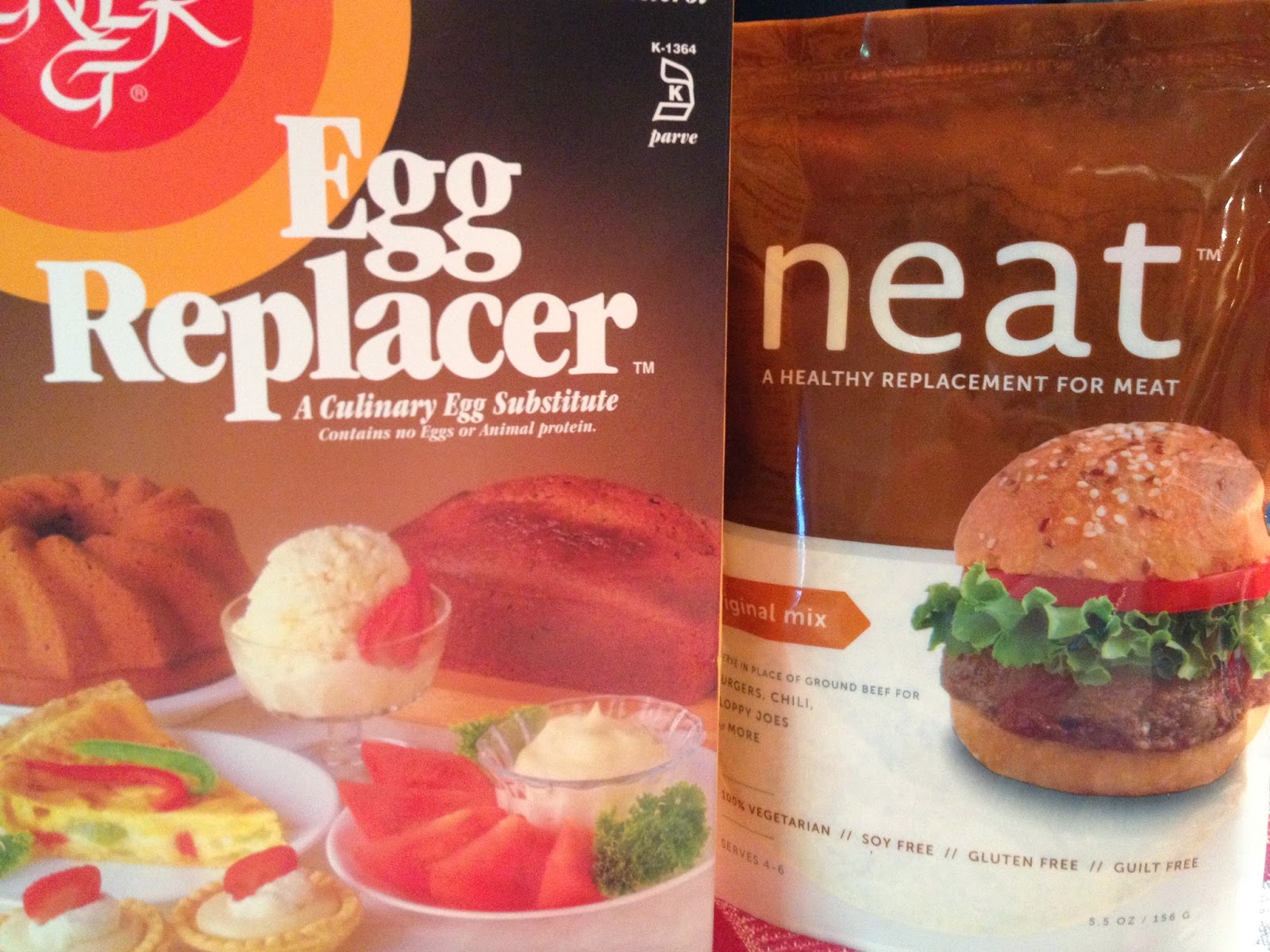 The package explains the simple instructions perfectly; there's just a slight variation for burgers (no water aside from your egg mixture). 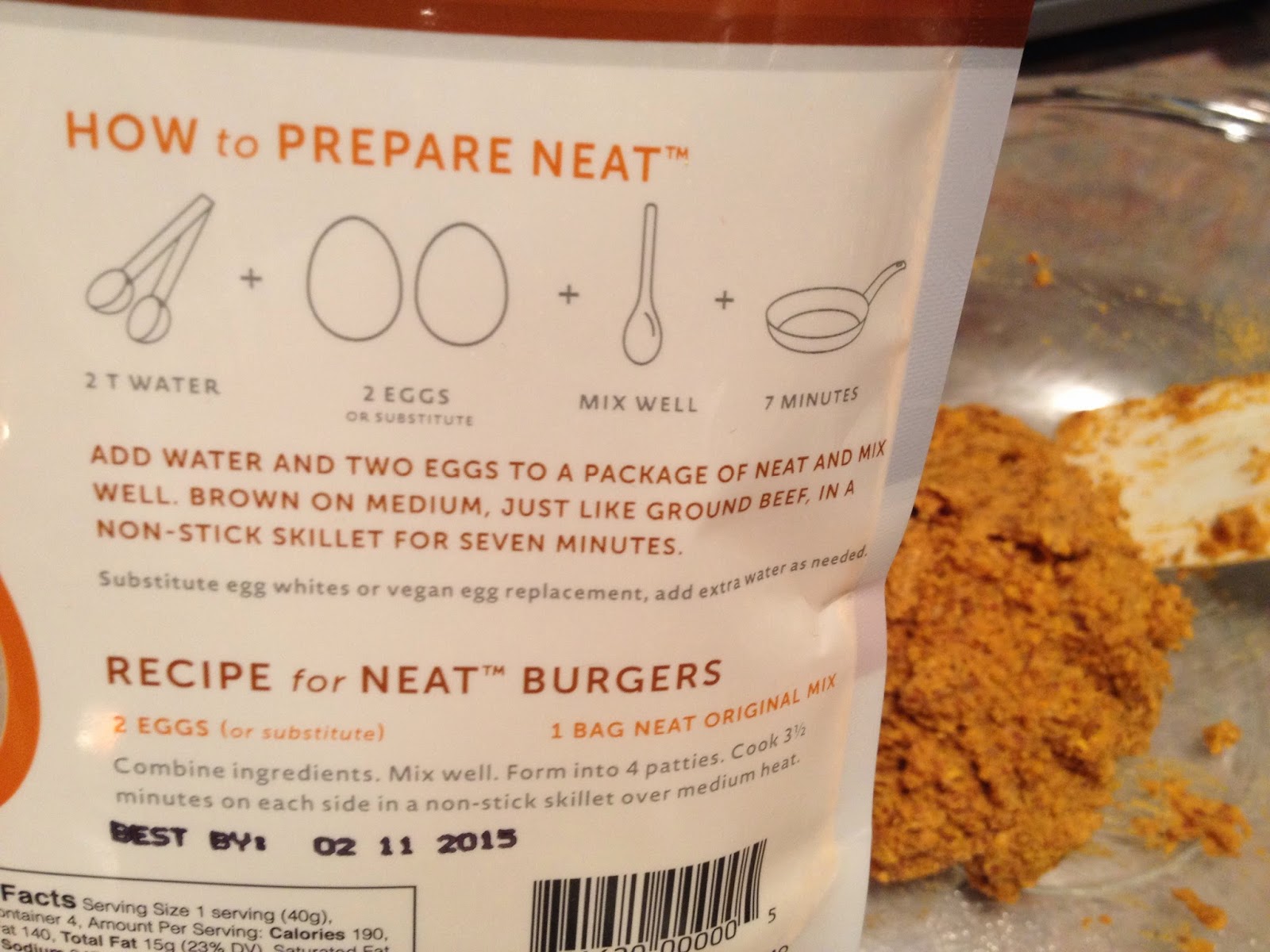 The mixture came together easily with just a spatula and I was able to easily separate the combination into 4 somewhat small burgers, shown here as yet uncooked. 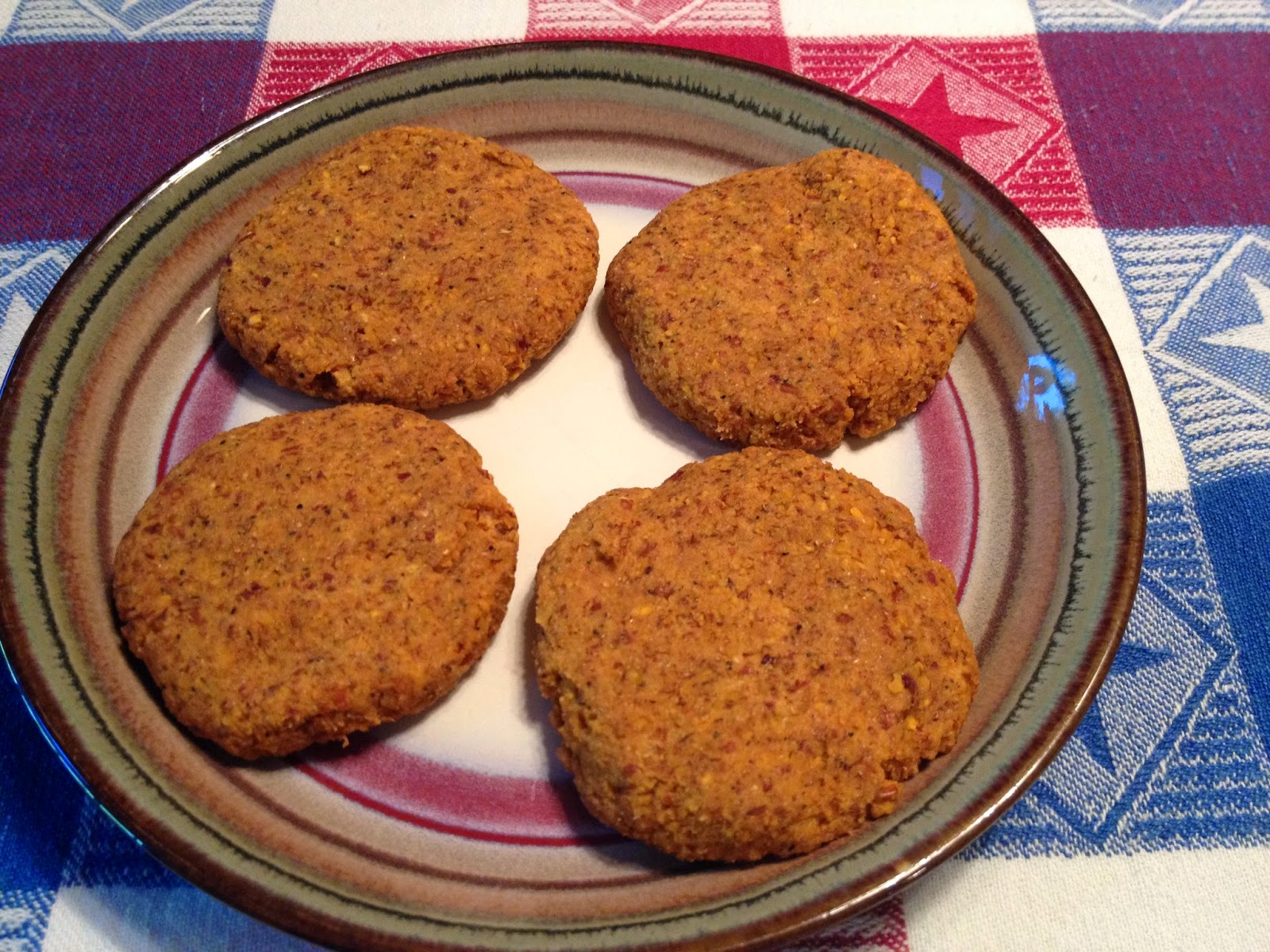 I heated one, per the directions, on the stovetop next to a store-bought veggie butter for comparison; I'd flattened it to about the same circumference, but it was noticeably thinner. 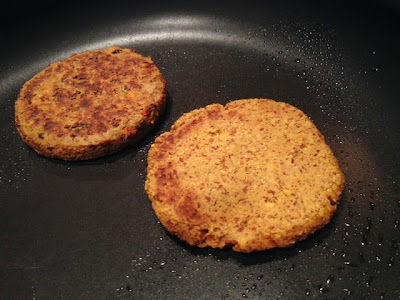 It browns and "cooks" through in about 7 minutes.  I dressed it up with some tomato, onion, and oddly radioactive pickles found at my parents' house. 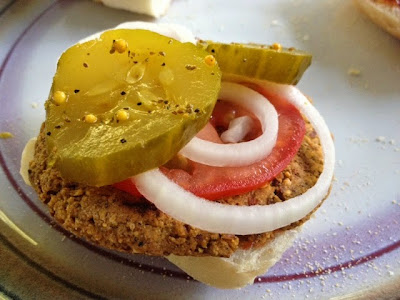 Knowing that the ingredients for all of the mixtures are very similar, I'm not sure what I was expecting. But, whereas the Mexican mix was a great (and compassionate) substitute for "chopped meat," the original mix made for a burger that was not a recognizable substitute for either a traditional meat burger, or a familiar veggie burger.  It was substantial in that it had a low smush factor, but it erred on the dry side [UPDATE 7/16/14: from neat, "since we’re not dealing with animal fat, neat can get dry if you don’t add some extra moisture.  More specifically if you plan to make a neatball or neat burger.  We recommend adding a veggie into the mix, spinach, onions, mushrooms, whatever you prefer. It adds that extra moisture to avoid dryness.] with little taste [UPDATE 7/16/14: from neat, "Original mix has no seasoning, it’s totally up to the consumer to add whatever they would like, seasoning, spices, condiments. The other three flavors have seasoning, Original is meant to give room for creativity and space to play with the final product."].  There was nothing unpleasant about it; it just tasted like a old-fashioned, hockey-puck of a veggie burger, which was a disappointment after the terrific success I'd had previously with the nachos. 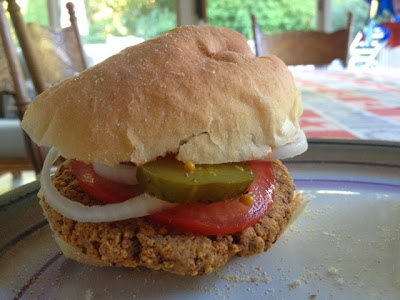 I am anxious to try and report back on the remaining two mixes: breakfast and Italian.  I remain intrigued and hopeful about the unique ingredients, so stay tuned.

Email ThisBlogThis!Share to TwitterShare to FacebookShare to Pinterest
Labels: 89, neat