Hits and Misses at Sacred Chow

My friends, VM, and I have a long history of loving Sacred Chow. There have been some ups and downs, but it really does hold a soft spot in my heart. 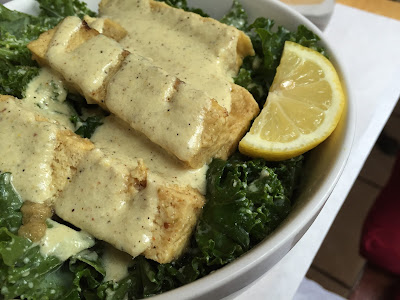 We revisited recently and this is how it went down. 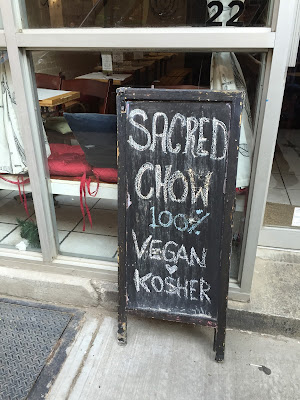 I started with a root beer and this one is fab. I made the mistake of ordering a case on Amazon before I realized you could get it for 1/3 the price at Trader Joe's. Lesson learned. In the meantime, stay tuned for ice cream floats. 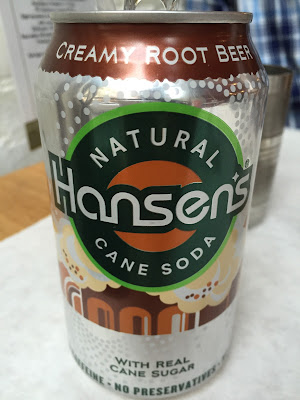 For an appetizer, my friend ordered the root vegetable latkes, which are now inexplicably waffle-shaped and served with [runny] homemade sour cream instead of the Indonesian date butter we all know and love. They're good, but not as great as the original. The biggest problem is that the sour cream makes a poor substitute for the delicacy that was the IDB. 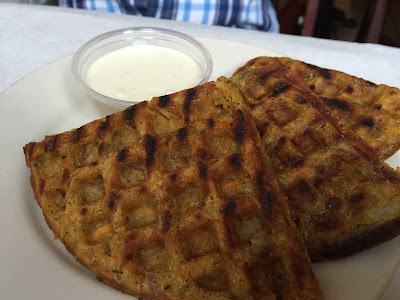 My beloved, creamy, peanut soba noodles with spicy peanut sauce are no longer available, but there was a special that sounded really similar that subbed spiralized beets; a friend and I shared. Needless to say, it wasn't the same at all, but our least favorite part of the dish was that it was all heat and no taste: as if there was more cayenne than anything in the sauce. She didn't finish her half and I didn't want it: bad sign. 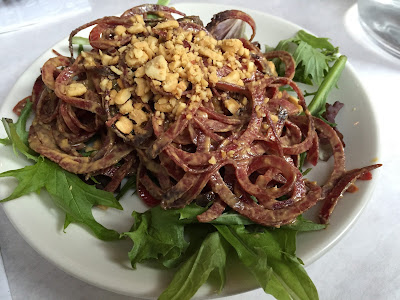 Luckily the meal took a significant turn for the better when our entrees came. One friend chose the Indonesian tempeh power bowl with steamed broccoli and brown rice topped with sauerkraut and Russian dressing. She said the whole combo really worked and she really enjoyed it. 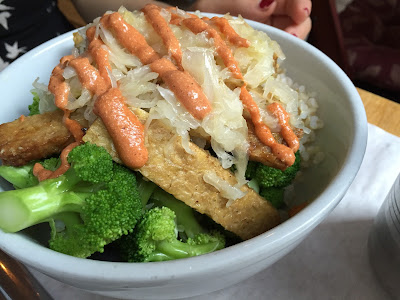 Another friend went with his longtime favorite: the Thai ginger BBQ seitan power bowl with steamed collards and brown rice. This is his personal, Chow barometer and it was extremely well-received. 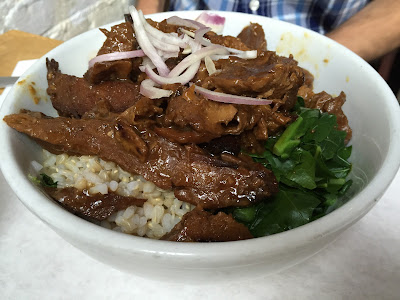 Me, the curmudgeon of the group, had their famous kale Caesar: "raw kale tossed in a house miso-Caesar dressing and layered with wedges of grilled and sliced Nama Gori steak. Finished with a drizzle of warm grill sauce (gluten free)." It was everything I've ever wanted in a hardy kale salad and more; I could eat it every summer day. It's still true: nobody does kale Caesar like Sacred Chow. 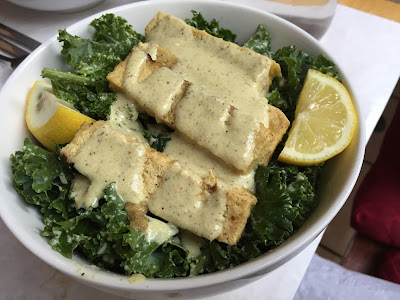 I'd be remiss not to mention that the seating is still a little awkward in that it's tight and mostly uncomfortable, but I'm willing to power through it just for this salad. The bottom line is that Sacred Chow still seems to be finding their footing and I really want them to succeed. There's a rumor circulating that they've applied to be on Marcus Lemonis' The Profit and I do hope that they get the opportunity and ultimately reap every reward from such an experience. Sacred Chow can be great again, but they're not quite all there yet. I'm rooting for them.
Posted by Abby Bean at 11:30 AM