It wasn't until I was in an Uber headed for Urban Vegan Kitchen that I realized it was located in the former Blossom on Carmine space. I thought it surprisingly fortuitous for one vegan restaurant to replace another until I arrived and my friend told me she thought they were still affiliated. I glanced around and the similar decor seemed to support that theory. A quick Google search brought up results from places like Seamless and Open Table that referred to UVK as, "formerly known as Blossom on Carmine," and,  "a.k.a. Blossom on Carmine-" seemingly suggesting definitively that she was correct. This article confirmed the association. 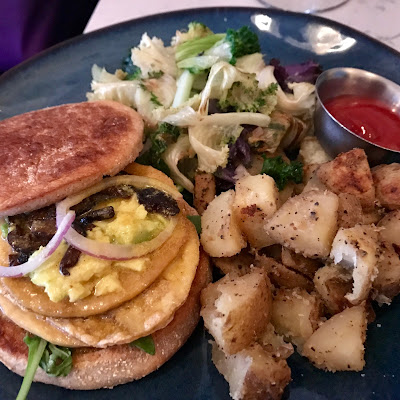 Unlike, say, Peacefood Cafe's severely limited brunch, the UVK brunch menu lists an impressive amount of offerings. As it happened, my friend and I both chose the same: breakfast sandwich: crispy tofu rounds, avocado, kala namak, shiitake bacon, hollandaise aioli, arugula, red onion, multi-grain english muffin served with garlic sauteed kale, homefries, ketchup. A note about the homefries: you can order them separately and they are described as seasoned potatoes with chives. I was very excited; potatoes can sometimes be the star of the show and I'm okay with that.

The dishes and mugs that UVK uses are beautiful pottery pieces that really lend themselves to the presentation, but I found the components of the meal to be considerably less stellar. The homefries for which I'd had such high hopes were under-salted and seemed "seasoned" with only pepper- nary a chive to be found. As my friend pointed out, the sauteed kale looked like the decorative or ornamental variety you see planted around strip malls in the fall. It was wilted and chewy and I began to wonder if it was meant to be edible. Another Google search does not recommend:

"...there is ornamental kale, and there is culinary kale. Both are members of the brassica family, but they're not quite the same...Ornamental kale is still edible, but you probably wouldn't enjoy it much, as the plant is fairly tough and chewy."


The sandwich, although in desperate need of hot sauce, was good- albeit oily. Curiously, it consisted of three, thin, fried, stacked, rounds of tofu along with the aforementioned accoutrements, but even the English muffin was soaked with oil- presumably from the grill? Again, the overall taste was relatively yummy, but rather underwhelming. Coincidentally, this has also been the issue in the past with Blossom on Carmine. Tastewise: way better than Blossom du Jour's messy egg, cheese, and bacon muffin...nowhere near as good as Terri's simple but delicious bacon, egg, and cheese muffin with hollandaise. 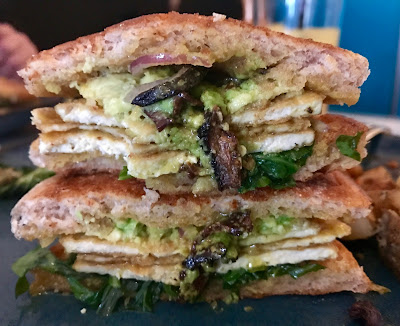 All this to say that I think UVK is simply a new concept for Blossom and it's not necessarily one I'd care to revisit. Coming in at $16 for the plate (one of the less expensive menu items), this turned into a $25+ brunch with OJ, tax, and tip. I guess brunch isn't one of the meals I tend to splurge on (ahem, dessert), but just speaking in terms of good food for the price, this falls skewed towards not-really-for-me as opposed to would-go-again. I guess I should just be happy they didn't charge a brunch surcharge.
Posted by Abby Bean at 7:13 AM