Every time I visit Sprig & Vine, I think about how many people I know in New Jersey and Pennsylvania (S&V is located in New Hope, just over the bridge from Lambertville) that have never been to this all vegan, culinary gem. 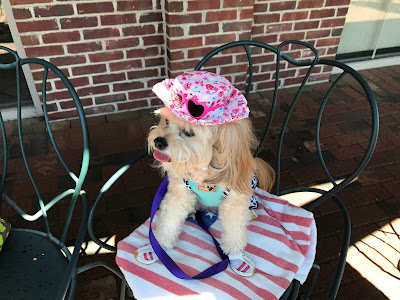 We like to go for lunch best; that menu always seems to float our boats more than brunch or dinner.

Tip: no matter the weather or time of day, the restaurant looks dark from the outside. In addition, the entry door is ridiculously heavy. This is all to say: do not assume they're closed and the door is locked, just give it a good yank.


On our most recent visit, VM & I started with the black bean & sweet potato griddle cakes with smoked paprika aioli and apple radish salsa. There is usually a variation of potato/pea cakes on the small plates menu and I urge you to order them in any iteration; summer 2012 version was our favorite thus far (yeah, we're serious about these; this is our all-time favorite).


Tip: we generally visit in the spring/summer/early fall so that we can dine al fresco with 89 in tow. This visit, we noticed that they let a small dog in a bag into the dining room- not sure what that situation was, but will investigate. 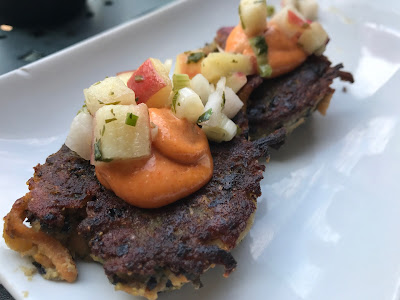 Next we shared the chopped cauliflower & baby spinach salad with red pepper, cucumber, pickled red onion, smoked paprika-lime dressing, and oven-dried black olives. VM always requests that we include a salad as part of our feast because she's like the little angel on your shoulder urging you to do the right thing.

Tip: if you are going to dine outside, get there as early as hours allow so that you're in the shade. Later in the afternoon the sun will creep in and you'll be sweaty & sunburned before you know it. 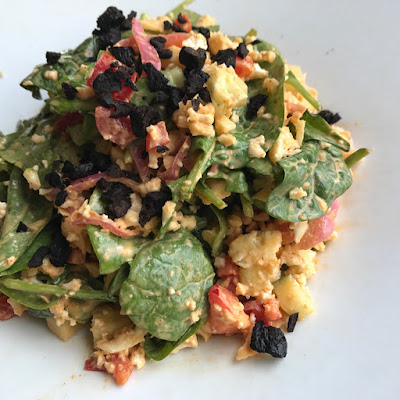 We always labor over whether or not we should orderd two different sammies to share, but 9/10 times we each get our favorite: the cauliflower banh mi with red chile sauce, pickled carrot & jalapeno, cucumber slice (new addition), cilantro (NO for me, yes for VM) & mint, lemongrass aioli on a baguette. I make a version of this at home, but it sure is nice not to have to turn the oven on when it's so hot outside!


Tip: don't order your entrees at the same time as your appetizers or they'll wind up coming out within minutes of each other- even if you specify that you'd prefer they didn't.

Because it's too hard not to order everything on the menu, we also ordered some sides. First, the baby bok choy, mushroom & root vegetable stir-fry with lemongrass ponzu and toasted sesame. We spent a lot of time marveling over how astounding this seemingly simple dish was. I pointed out that it would make an amazing lo mein. VM decided it would make a great anything. I cannot stress how delicious it was.

Tip: a lot of the S&V offerings are seasonal, so keep in mind that something you see on one visit may not necessarily make a repeat performance on the next. 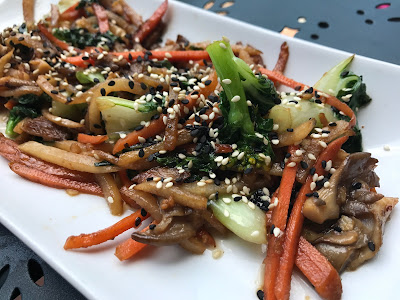 And, of course, we can never resist their fried fingerling potatoes with urfa biber chile aioli because no matter how hard VM tries to duplicate this dish, it's never quite as decadent as S&V's version.

Tip: ask for a little ketchup. The aioli that comes with these potatoes is always out of this world, but it's nice to have a palate cleanser in between. 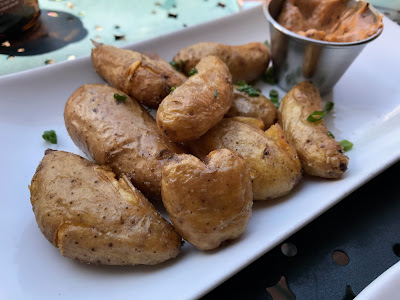 This is the point in our meal where I've always eaten my half of everything and VM has packed at least part of hers to go. So, when I ask for the dessert menu, I am clearly the little devil on her shoulder, urging her to do the bad thing. I always win. This time we I chose the flourless black cocoa torte with almond, beet ganache, caco ice cream, and hazelnut candy. Listen; I am not opposed to ordering a dessert based solely on a single candy element; this was one of those times and it was a decision well made. I'm pretty much a purist when it comes to desserts, so you will not be surprised when I tell you that the cake was decadent in a dense, but fluffy brownie/not brownie way. The ice cream was refreshing and delicately flavored. The candy was pure heart-eyes emoji and I was dreaming of a million of them arranged in little cookie sandwiches filled with chocolate. The ganache was, I'm afraid, too beety for me, but it was easy to eat that part sparingly. More adventurous diners may find it more appealing; I would have preferred a simple drizzle of it on the plate. No harm, no foul.

Tip: if you've consumed anywhere near as much as we do in a sitting (we consider it our meal for the day), definitely consider sharing a dessert. I know, I know; it sounds crazy coming from me, but their savory offerings are so impressive that I know when to err on that side for a change. 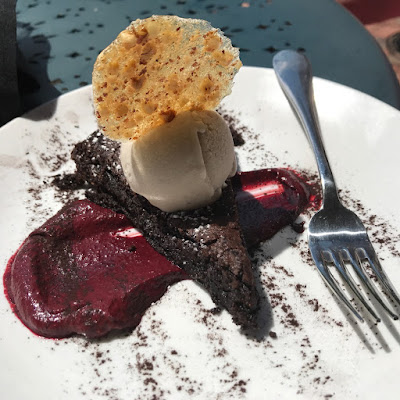 Final tip: if you sit in the outdoor seating section, you may want to tell the host inside that you're there they request that you alert them of your presence. Really.


The tables are just outside the doors and windows of the restaurant, but I've been told that "they're too busy inside" to look out. I can see how that could be the case, HOWEVER...once, a server attending to the other tables walked by us twice without so much as looking in our direction. When I said, "excuse me," and asked her if we could see menus, she said, "Oh; I had no idea you were eating here.  Sometimes people just sit." AND SHE NEVER THOUGHT TO ASK. I should note that this seating section is specifically for Sprig & Vine, in front of Sprig & Vine; they are not flanked on either side by another restaurant.

On this visit, a server who was already helping other outdoor diners approached us with trepidation just as we'd gotten ourselves situated and asked if we were eating. We said yes, and she asked if we'd already notified the host inside. We said no (she'd literally appeared within moments of us sitting down) and she kind of sighed in a way that seemed to admonish us for the oversight. I couldn't help but to ask why else we'd be sitting there and she explained to us all the reasons why S&V seems to feel that the onus is on the diner to announce their arrival, while the staff operates under the default assumption that you're not a diner. Before I go any further, let me note that- as is usually the case, she went on to be totally great and pleasant server to spend the afternoon with and this was not a confrontational conversation; I just truly find this practice fascinating (and frustrating) and was trying to understand.

I don't know about you, but when I'm dining outside- particularly with my dog in tow, I'm not really in a terrible hurry; I figure you'll see me when you see me. However, if S&V finds it imperative that customers formally notify the host inside of their arrival, I'm happy to do so. But, maybe they should consider putting a friendly sign to that affect on the tables? Because starting off on this foot with the server isn't always the most positive beginning to a meal- and it's kind of unfair to the server to have to be so confrontational.

Not to mention that, from a business standpoint, wouldn't it make far more sense to assume that anyone who sits at your tables is dining with you? Greet them with friendliness and a menu and I'll bet you might attract these people who you say "just sit." I'm no restaurateur, but it seems to me that it would make more sense for your default to be to treat all people like customers rather than non-customers. A non-customer isn't going to begrudge your friendliness and offer to dine, but a customer could certainly begrudge being ignored or approached in a confrontational manner.

All this is to say that Sprig & Vine is great; we don't get there nearly enough, but we wish they'd work their quirks out.


Funny story: our server found this tiara a few tables down and asked us if it was ours "because it looked like it would be." The surrounding diners agreed. It wasn't, but when no one claimed it, she kindly presented it to 89 & it was a perfect fit. We've been blinging it out and it will make a reappearance shortly.
Posted by Abby Bean at 9:18 AM

Email ThisBlogThis!Share to TwitterShare to FacebookShare to Pinterest
Labels: 89, Sprig and Vine