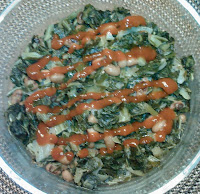 Presumably to lure the hungry, after-work crowd, Whole Foods has a habit of sending emails right around the end of the workday.

Here's a super easy recipe that I adapted from one such email: Whole Foods' Coconut Milk Braised Greens ("adapted", i.e., simplified it as much as possible and spiced it up).  I think it's a worthy dinner, but would also be a good side dish or potluck submission amongst wary omnis.  Toss with pasta or serve over rice if you're feeling carby.

Heat up some olive oil in a giant frying pan and add your onions, moving them around until they're soft & clear.  Add your greens & toss 'em around a bit with the lemon juice, salt sprinkle, and generous pepper.  Then pour in the coconut milk and stir well.  Leave to simmer until the greens are cooked to your liking.  Add the beans for just long enough to heat, and serve with a pretty design of Sriracha on top.  Keep the bottle nearby because-- as always with Sriracha-- the more the better.

I've found that this recipe is just as good, if not better, when reheated.
Posted by Abby Bean at 5:36 PM