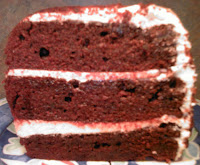 What you see before you is a giant slab of red velvet cake, as it looked after being purchased from The Bean in the morning, and then dragged around all day.  Still intact (thank you, cool winter weather), it was none the worse for wear.
As I've stated before, I'd never had red velvet before going vegan.  Then I started trying it everywhere I'd see it just to find out what exactly red velvet was, what it tasted like, and why some southern weddings serve it in a cake shaped like an armadillo.  Oh wait, maybe that was just in Steel Magnolias.  Anyway, no matter where I'd taste it-- even if it was from a bakery I normally like-- I wouldn't be impressed; it seemed to have no taste whatsoever, yet have an affected consistency varying from dry to rubbery or both.

And then I found Red Mango's version and I finally saw what all the fuss was about.  Sweet, light, and moist, I knew that I had found the "real" thing.  While I normally don't like cream cheese frosting, Red Mango's Red Velvet is topped & layered with a delicious version that is perfectly proportioned to cake.

I still can't adequately describe what exactly red velvet tastes like, though.  Wikipedia says "somewhere between chocolate and vanilla in flavor"; what does that even mean?  All I can tell you for certain is that Red Mango's version is the real deal and it is GOOD.
Posted by Abby Bean at 7:15 PM

Email ThisBlogThis!Share to TwitterShare to FacebookShare to Pinterest
Labels: Red Mango, The Bean