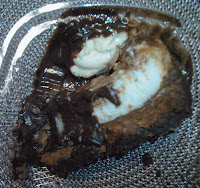 This hot mess is actually a fallen, mis-handled slice of Red Mango's Chocolate Peanut Butter Cheesecake from The Bean.  Admittedly, I've fruitlessly ducked into The Bean countless times before on a search for Red Mango goods to no avail.  But, sure enough, there they were: hiding in plain sight on a separate shelf from the non-vegan fare.

I thought The Bean might be too hip for me, but I was pleasantly surprised by how genuinely friendly and helpful the two girls behind the counter were-- even going so far as to tell me which cakes they usually carry, which are their favorites, and so on.  Very chill.  I do want to stress that the cake was in no way mis-handled by The Bean staff; in fact, they were quite delicate in the way they wrapped it to go.  Instead, the package was inadvertantly manhandled by moi as I trekked around the LES, and therefore I take full responsibility for the unfortunate resulting visual.  Note that the mushy messiness in no way affected the taste.

You're basically looking at sideview; here's the breakdown:
This cake was delicious, but oddly not peanut-buttery enough for me (I really, really, really like peanut butter).  However, there's no denying it's decadence and any normal person fan of the PB/chocolate combo would surely go ga-ga for the undeniably innovative layering of textures and tastes.  As for me, I think I'd prefer to have a thick, peanut butter sandwich on toast... and then follow it up with a slice of Red Mango's incomparable Red Velvet Cake.
Posted by Abby Bean at 7:54 AM