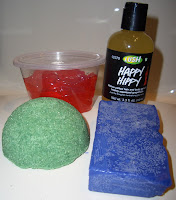 Until recently I had never heard of LUSH, but then I read an article about their Charity Pot, a vegan hand and body lotion whose entire purchase price goes to charity, and I wanted to check them out.

I immediately visited the store closest to me and the smells and visuals were instantly overwhelming.  Before I could make sense of it all, someone offered to scrub my hands for me (or some such nonsense) and I went screaming out of the store and down the block.  Actually, I simply said no thank you, but the offer left me feeling so uncomfortable that I wasn't able to concentrate or shop leisurely- for fear that the same or similar offers would be repeated incessantly under the guise of friendliness.  The thing is, I am a low key shopper: say hello, but then let me have at it.  I don't like when salespeople follow me around asking if I know what I'm looking for, if I'd like them to start a fitting room for me, and/or read aloud signage that I am perfectly capable of comprehending on my own.  Oh yeah, and I don't like strangers who have just laid eyes on me offering to touch me.

So, despite my intentions, my visit left me no further along in my inquiry into LUSH.  But then a friend gifted me a LUSH assortment and I realized that without trying I had succeeded in cutting out the middle-man: in this case, the middle-man being an over-zealous LUSH employee with a penchant for cleaning the hands of strangers.

To start off, this is one of the reasons I was so interested in LUSH in the first place: nothing is tested on animals, period.  Taken directly from their website:


"We never test our products and ingredients on animals, or engage with third-party suppliers to test on our behalf. LUSH also will not buy any ingredient from any supplier that tests its materials on animals for any purpose."

Also-- I should note-- they do offer non-vegan products, but all of the vegan items are very clearly marked: in person, on their website, etc.  They even offer vegan gift assortments, which- of course- is what I recieved.

The gift came pre-packaged in a little box wrapped in recycled paper, and even included a contents listing of ingredients and, in some cases, directions.

The most interesting item in my assortment was, by far, the Strawberry Santa Shower Jelly.  On the contents sheet it looks like a red, Santa shaped, gel jiggler, but in reality it was a reusable plastic container* filled with red goo.  The directions said you could use it on your body or your hair.  I tried both, but the results were the same: "split, splat" as the jelly clumps failed to dissolve and slipped off my head and body onto the tub floor.  Ironically though, it actually left my hair feeling nicely conditioned and smelling pleasantly like artificial strawberry.  Unfortunately, I felt like too much was wasted down the drain.

The Sugar Scrub is a rather ominous looking half-sphere, and for good reason: it's a serious exfoliant that's not for sissies.  The directions indicate that you should "Get wet all over.  Scrub your whole body.  Rinse off.  Feel smooth."  So, I followed the directions and I have to say that I immediately felt ridiculously smooth.  Unfortunately, what they didn't mention was that once the scrub gets wet it will begin to disintegrate.  After the scrubbing I placed it on a towel outside the shower and it proceeded to melt a little into the towel.  I scraped it off and it is currently a soft, oozy mass on a plate on my bathroom counter; when I want to use it i have to scoop some off: not exactly user friendly.  The only thing I can think of is that perhaps I should have just hosed off in the backyard and used the scrub completely dry?  Perhaps the steam and/or the overall wetness from the shower caused it's accelerated disintegration and I am completely to blame.  That's a lot of pressure for cosmetics.

Best named item in the group was the Happy Hippy Shower Gel, and it also smelled decisiously like grapefruit.  Again, the description suggested that it was for use as a body and hair gel, so I tried it both ways.  As far as body gel goes, it acted much the same as other shower gel/body wash and was considerably sudsy.  But, I was disappointed that it didn't leave my bathroom smelling as good as it smells in the bottle.  As a hair gel it was light hold and non-sticky, but seemed to make my hair oily by the end of the day nonetheless.

When it comes down to it, I am really all about bar soap.  Sure, I've spent time dabbling in all kinds of fancy, glittery cosmetics, but when it comes down to it, what you really need is soap.  Like most people, I like a nice lather, a pleasant and lingering aroma, and a bar that lasts more than a week (I'm talking to you, Duross & Langel).  LUSH's Father Frost Soap was unusal on all counts, to say the least.  There was no pleasant fragrance and it's bright, concentrated, periwinkle hue was not at all indicative of the sudsing power.  As a matter of fact, there was a waxiness that made producing even the slightest lather a chore.  Normally not one to be wasteful, I admit I ditched this bar after a week because I was not in the mood to struggle during my otherwise pleasant, hot showers.

Overall, I highly admire LUSH as a company, even though I wonder why they aren't simply all vegan.  The products I tried this time around were a little too high-maintenance for me; next time I'll try some easy staples...like lotion.  Overall: fun vegan gift but no must-haves and certainly no recommendations.
Posted by Abby Bean at 3:33 PM

Email ThisBlogThis!Share to TwitterShare to FacebookShare to Pinterest
Labels: cosmetics