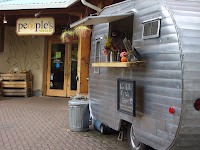 I've been putting off writing this review because the experience was so bizarre that I wasn't sure I'd be able to make sense of it.  I'll try.

As with almost everything I did in Portland, Sip, a vegan milkshake/smoothie/juice cart parked outside of a neighborhood co-op, was reviewed beforehand on blogposts and reviews; I knew I would visit and I knew I wanted a custom chocolate/peanut butter/oreo milkshake.  I actually went way out of my way to get it: taking a cab to another (unscheduled) stop nearby and then walking an additional six blocks.

I anxiously approached the silver shack on wheels and asked if my custom concoction was a possibility and the girl said yes.  I noticed on the menu that their regular milkshakes were typically made with soy ice cream, but for an additional $1.50 you could substitute Coconut Bliss.  Since I hadn't yet tried Coconut Bliss ice cream, I asked the Sip girl if she would recommend the upgrade.  She looked at me like I had twelve heads, shrugged, and said something along the lines of, "It's up to you".  Okaaaaay.  So, I finalized my order and was told it would be about fifteen minutes because there were "other drinks ahead of me".  This seemed odd for two reasons.  1) She hadn't been making anything when I arrived and 2) In the ten minutes or so that had elapsed from the time the cart was in view upon my approach, through my curiosity-driven perusal of the menu, through the chat about and ultimate placement of my order, not one other soul had come within 3 feet of the cart.  Non-plussed, I gave her a shrug back and decided to check out the co-op.

The People's Co-op was surprisingly big and packed with goodies; it took quite a while to look through the whole store.  I actually stuck my head out a few times to see if my milkshake order was up, but it wasn't.  After 20 minutes of shopping I was done and went back outside because I was ready for my milkshake.  But, my milkshake was not ready for me.

I walked over so that I was in plain view of the Sip girl.  At this point there were a few customers hanging around the cart waiting for their orders and she was busy cutting fruits and brewing coffee: neither of which were ingredients for my milkshake.  I inquired and was told, "Almost."  After ten more minutes of polite waiting I decided to check in again, "Is my milkshake ready by any chance?"  To this I was told that there were still drinks ahead of me and that it would be another fifteen to twenty minutes.

My impatience obvious, I asked how that was possible.  The response was that she was making other drinks.  Having only seen about four other people anywhere near the cart in the space of forty minutes, and seeing as I didn't have another few hours to wait I told her that she should just cancel my order because I had no idea that there was a 45 minute plus total wait time.  To that she responded, "Well, besides the line it takes fifteen minutes to make a milkshake!"  WHAT!?!?  Was she milking the soy cow back there?  Totally  Bizarre.  I walked away disgusted, with a belly devoid of the coveted chocolate/peanut butter/oreo milkshake.

So that's the story of my disappointing and unfruitful experience at Sip.  There were a lot of east coast/west coast differences that I found glaringly obvious during my trip, but this one is an unfounded mystery.  Is it possible that on the left coast milkshakes truly do take a minimum of fifteen minutes (minus extraordinary wait times) to create from pre-made ingredients?  Could it be a time zone thing?