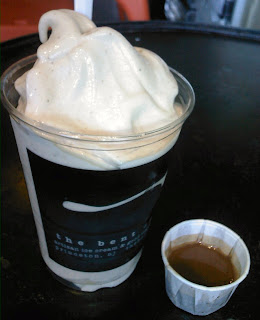 The Bent Spoon is an extremely popular artisan ice cream shop in Princeton, NJ; a little known fact is that they are vegan-friendly.  They serve homemade ice cream and sorbet sourcing local, seasonal, and/or organic ingredients when possible.  The important thing to note is that most of the sorbets are vegan (ask which contain honey) and include flavors that taste more like rich gelato than fruity italian ice.

If you're interested in a cone or cup and eschew fruity desserts like I do, I'd recommend the coconut sorbet (on top) and the dark chocolate sorbet (on the bottom).  They are both creamy like ice cream, not icy.  But what I'd really recommend is a shake made out of their dark chocolate sorbet and soy milk: it's super thick and even more chocolatey.  Sprinkle some cinnamon on it for an extra kick.

Another vegan option at The Bent Spoon is their Banana Whip.  I'm not exactly sure how they do it, but one second they have a bowl full of frozen, organic bananas, and the next they are handing you a cup of banana soft-serve.  It's completely vegan because there are no other ingredients: just the bananas and magic.  Voila, healthy dessert.  I will note that: much like different bananas have a different taste, so too can the banana whip. If you find yourself facing a somewhat bitter batch, you can always gussy it up with a sprinkle of cinnamon and some agave (if you happen to travel with it).

Finally, The Bent Spoon sometimes has vegan, euro-style, hot chocolate (there's even a sign with the word vegan on it!).  I don't really know what "euro-style" means, but I implore you to get over there and have a cup; it is phenomenal.  One of the many kind and helpful staff members let me try it one day and it knocked my socks off.  They do not have the vegan, soy version all of the time so get it when you can.  I've also been advised that sometimes in the summer there is a vegan, soy version of frozen hot chocolate.  I had a frozen hot chocolate ONCE before I was vegan and I still haven't quite gotten over it; it tasted like the thickest, coldest, most chocolately shake ever.  I've tried to duplicate it at home with vegan ingredients, but have only had disasterous results.  Considering how good their hot chocolate is, I am looking forward to trying The Bent Spoon's frozen version, as I don't imagine it will disappoint.  Will update when I know!
Posted by Abby Bean at 12:27 PM