We Can't Say It's Cheese

The generous folks at We Can't Say It's Cheese graciously sent me samples of their current lineup of, well, cheese.  Of course these specimens are vegan, but they are also wheat-free, soy-free, kosher, and not made with GMOs.  If you can believe it, the main ingredient is actually oatmeal!

I was so anxious to try the cheese that I admit I was a little lax in my ingenuity.  Actually, that's not true.  When it comes to cheese I am so drastically out of practice that I really have no imagination whatsoever.  I love tried & true cheesy staples and will make no apologies for basking in them. 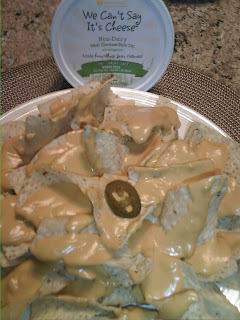 The first flavor I tried was the Mexi Cheddar-Style Dip.  I scooped the contents of one entire container into a bowl, microwaved it for two minutes (stirring in-between), and instantly had creamy, nacho cheese reminiscent of the kind you can get at sporting events or movie theaters.  So exciting: the only thing I was missing was the pump!  I drizzled poured the entire bowl over a ginormous plateful of nacho chips and started noshing; it was delicious.  The consistency was exactly right, although I would have like it a bit spicier since it was the "Mexi" variation (I also like things extremely spicy).  Not one to be deterred, I spooned some salsa on top of the cheese and even sprinkled some jalapeno slices for good measure; the resulting combination was amazing.  The nachos were gooey just like old times: reminding me how much more delicious they get as they get a little soggy from the cheese (!).  You could alternately create your own queso for dipping by mixing 1 cup of WCSIC with 1 cup of salsa, but, having tried it both ways, I would highly recommend the plate-o-nachos as the preferred technique.  Cheese + chips + salsa = yummy dipped nachos, but drizzled cheese + chips + fixins = NACHO PLATTER EXTRAVAGANZA.  Please note that hoarding 80% of an entire WCSIC container's worth of nachos with cheese is not very wise, as the cheese is extremely filling (perhaps because of the oatmeal?).  So instead, pretend you're being selfless and share. 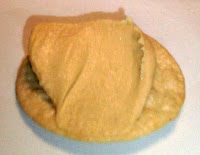 Next up was a comparison between the two flavors of spread: Hickory-Smoked Cheddar-Style Spread and Cheddar-Style Spread.  I went simple, adorning a whole wheat cracker with each in order to really appreciate the cheese.  I tried the cheddar first: it was easily spreadable, but adequately stiff in texture (like "regular" cheese spreads).  It had an extremely mild flavor that I'd liken more to American cheese than cheddar.  Next I tried the hickory-smoked; it was an obvious victory.  With the exact same believable consistency as the plain cheddar, the smokiness gave it a much appreciated and winning kick. 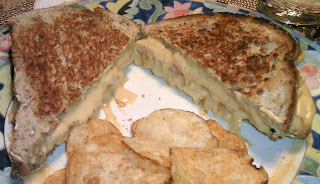 Since I enjoyed the hickory flavor so much more than the plain cheddar, I decided to save it for snacking and use the Cheddar-Style Spread for a grilled cheese sandwich, since I always pepper mine with tomatoes, onions & hot peppers anyway.  I generously spread the cheese onto two large slices of bread (the container would have made two like-sized sandwiches), stuffed it with the afore mentioned accoutrements, and fried it in a frying pan with Earth Balance instead of sans butter in the toaster oven, per usual.  This turned out to be an excellent decision, as the cheese became oozy to the point that I imagine it would have made a bit of a melty mess within the toaster oven.  As you can see, the ooziness extended to the eating portion of the sandwich experience; it was considerably more sloppy to eat than your run of the mill grilled cheese.  Both the taste and runniness reminded me more of making grilled cheese with cheese whiz rather than cheese slices, so it comes down to preference.  Personally, I think it would make quite the fondue! 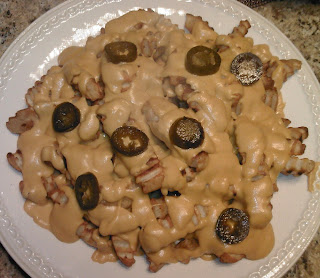 Finally, the Cheddar-Style Dip, which I had been saving specifically for cheese fries.  It had the same mild flavor as the cheddar-style spread, and worked well on the fries.  The dip satisfactorily duplicated non-vegan, pump-style cheeses in taste and texture, but suprisingly did not deliciously soggify the fries in the same way as the mexi-cheddar-style dip had worked on the nachos; that was disappointing.  Maybe my fries were simply impervious to the cheese?  Ultimately, the fries were enjoyable, but the nachos were better.  I've since realized I haven't had cheese fries since I was in high school in a very long time, so maybe they're just not as high on my list as nachos.

Having tried all of the flavors/variations, I was a little perplexed by the overall difference in intention between the dips and the spreads.  I realize it's not rocket science, but the lack of instructions and/or serving suggestions on the packaging left me to wonder how best to utilize the vegan cheese.  I had tried to use the dips and spreads in a manner true to their description, but then I decided to try an experiment: I melted the hickory-smoked cheddar-style spread in the microwave in same way as I had melted the dip.  There didn't seem to be any discernable difference in the results except for that perhaps the melted dip was ever-so-slightly smoother and creamier in texture than the spread.  But overall I'd say that they both have equal meltability, so have at it!  If you like the hickory spread melted, do it.  If you like the mexi-cheddar dip smeared on a bagel, go for it.  Perhaps the lack of serving suggestions are because all versions are meant to be versatile?  Ultimately, I'd recommend you go to town at your will.  Surely the We Can't Say it's Cheese police aren't going to come knocking on your door for an infraction (or are they?).


So here are my current thoughts on the vegan cheeses in my repertoire:
And now,
Thanks, We Can't Say It's Cheese, for letting me give it a try!
Posted by Abby Bean at 10:28 AM