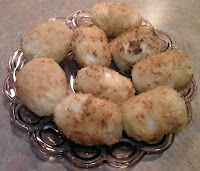 For my second submission to the Teese Challenge, I had a tube of cheddar to utilize.  I decided to make Teese-filled croquettes, and enlisted the help of my now-vegetarian-Mom, who served me decidedly non-vegan croquettes as a kid.  In my mind, not only would these croquettes improve upon her version by being cruelty-free (stuffed with crushed chick-peas instead of tuna), but they would be made only better with the addition of melty cheese at the center. 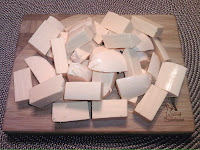 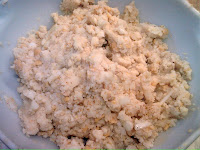 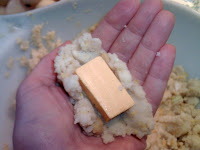 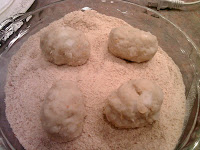 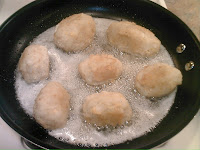 You may choose to serve them at this point,
but we were disappointed to find that the Teese center had not melted even slightly.

Heating them further in the oven and microwave
sufficiently solved that problem, but only if the croquettes were halved. 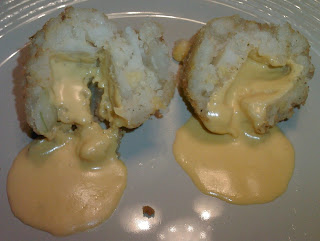 Heated whole, the cheese melted but the previously intact croquettes fell apart.  The consensus, however, was that we much preferred messy croquettes with melted cheese than beautiful croquettes containing a stick of unmelted cheese. You decide*.
Overall it was a bit of a bust considering the amount of time it took to assemble the croquettes, only to have to heat them to bursting in order for the cheese to melt. Next time I think I'll just invent some kind of one corningware casserole of the same ingredients mixed up and baked, thus saving the time that was, in this case, for naught. 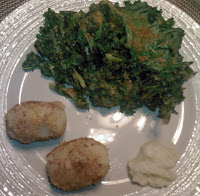 This picture was taken victoriously before the realization that the cheese had not melted.
serving suggestion: horseradish
* Frying them longer on lower heat caused them to disintegrate into the oil.  Baking them at high heat produced edible messy/melty versions, but they were missing the browning/crispiness of the frying.
Posted by Abby Bean at 6:48 PM