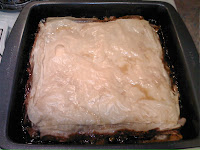 I had some phyllo dough left over and I wasn't really certain if it would survive, uncooked, as a leftover ingredient.  So, I quickly made the best use of it that I could think of considering the time crunch: I made baklava!

Don't judge me: my phyllo was drying out; it was a race against time. 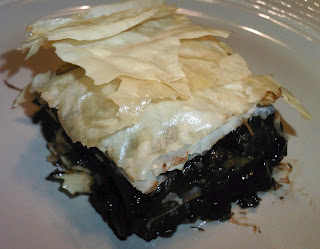 My inability to follow directions poor planning and execution is in no way a reflection on the original recipe, though, which I happen to know turns out flawless (when baked by Christine, not by me).

As for my results, it is possible that I may have over-chipped, since it was pretty oozy when I took it out of the oven...um, and then, when cooled, turned out pretty much like a solid bar of chocolate with flecks of nuts & phyllo speckled throughout.