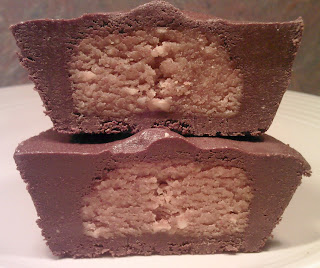 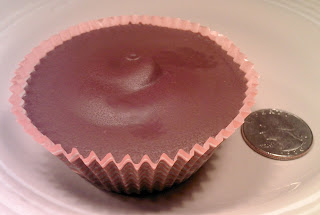 The tasting: Is it just me, or does everyone have their own way of eating things?  I mean, who didn't spend their childhood eating fudge stripe cookies off of their pinky in a rotating motion?  So, despite the imposing size of the jagunda cup I wasn't at all intimidated; this was familiar territory, simply on a larger scale.  I approached Gone Pie's vegan peanut butter cup exactly the same way as I did traditional peanut butter cups in my non-vegan days: nibbling all of the chocolate from around the perimeter and then savoring the peanut butter center with only the chocolate top and bottom remaining for accent. This was quite a feat, as the proportion of chocolate to peanut butter is quite high.

I'd like to say that it was a completely authentic experience and that I enjoyed it equally, but not so.  It would seem that, once again, Gone Pie's stellar ingredients have lent an incredible flavor punch to something I thought I already knew and loved, thusly improving upon it.  I checked the ingredients and, what do you know?  There I sat savoring this humongoid mound of deliciousness that can mainly be described as...peanut butter (!), thus begging the question: what kind of crap must have been in those mass-produced "PB" cups anyway?  Shudder.  As a bonus, my peanut butter seemed to be of the chunky variety...and me loves me some chunky bits of peanuts in my peanut butter!

In order to assuage my guilt for hogging all of the PB cups, For research purposes I decided to do a taste test of the peanut butter cups at varying temperatures.

So, there you have it: 3 Gone Pie selections, 3 rave reviews.  I look forward to trying just about everything else in the Gone Pie arsenal and reporting back: 'tis my duty.