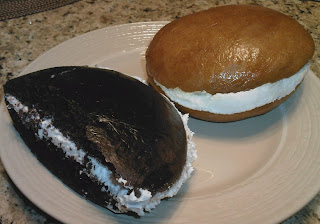 As I tend to do in various places around the city, I stuck my head into Viva the other day to see what Vegan Treats delicacies they had to offer.  I was excited to find that they had been stocked with pumpkin whoopie pies, which I've never tasted from VT.  I tried to resist the traditional whoopie pie that I've enjoyed many times in the past...but I couldn't.  In my ongoing attempt to try everything that Vegan Treats has to offer, it's still hard to ignore my favorites.

The pumpkin whoopie pie was as fresh and yummy as I expected, but I was disappointed that the creme was standard issue even though the cake was pumkin spiced.  The first pumpkin whoopie pie (and the second, third, etc.) I ever tried was at Back to Eden Bakery in Portland, Oregon and the creme was just as, if not moreso, pumpkin spiced than the cake (no, they don't ship).  The Vegan Treats version was delicious in it's own rite, just not nearly as pumpkin-y as I was expecting.

Next up was the delightful traditional whoopie pie: chocolate cake filled with vanilla cream.  This is what I eat to remind me of devil dogs, except for that these are super-moist, much more delicious, and cruelty-free: reminiscent of devil dogs, but far superior!  So, my recommendation is to go for the Vegan Treats' traditional whoopie pie.  You will not be disappointed; it is exquisite!
Posted by Abby Bean at 8:25 AM

Email ThisBlogThis!Share to TwitterShare to FacebookShare to Pinterest
Labels: Back to Eden, Vegan Treats