With her uncanny ability to veganize just about anything (still waiting for a Whatchamacallit! and a yodel), this is my vegetarian Mom's veganized matzoh brei*. 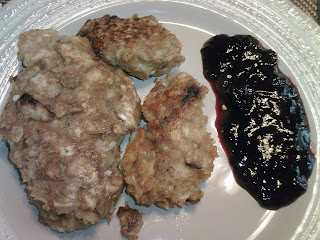 Repeat until your free five pound box of matzoh is no longer taking up space in the pantry. 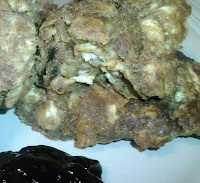 *For those of you who don't know, matzoh brei is a dish served in Jewish households primarily after Passover when there is an abundance of matzoh in the house and the charoseth** is long gone. The "original" version is kind of like a matzoh-filled omelette, but since it's sweet it is usually compared to french toast. No matter what, it was surely invented by someone overloaded with matzoh and running out of ideas. 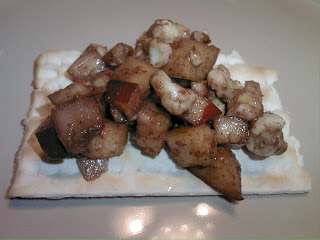 **Charoseth is a mixture served with matzoh on Passover that usually consists of apples, walnuts, wine, and cinnamon.  It is delicious and always causes people to wonder aloud why it's only enjoyed at the holiday since the ingredients can be found all year round.  Yet, inevitably another charoseth-free year passes and the same remark is repeated.
Posted by Abby Bean at 10:54 AM