I am a HUGE fan of kettle corn.  Other than that, I have always been able to take or leave popcorn.  Then I discovered the delicious simplicity of Little Lad's herbal corn and it occurred to me that popcorn makes a fine dinner.  Fast forward to Foodie Blogroll recently highlighting an organic, gourmet line of popcorn in crazy delicious sounding flavors and I was ready to broaden my popcorn horizons.

479 Popcorn has an appetizing, slick, and super-informative website.  I went right to the FAQ section for nutritional information and found the info I was looking for:

I didn't even know what some of those words were, but I knew I wanted to try them...all.  But, their online options consist mainly of various collections and samplers, none of which are entirely made up of the vegan flavor offerings.  So, I immediately sent them an email suggesting it!  They wrote me right back to thank me and to let me know that I could call to place an order for individual flavors of my choosing, which I of course did immediately.

I anxiously presented them to my omni dad as a gift for two reasons:
Per usual, he wasn't visibly impressed or excited by the gift, but everyone else was anxious to try the seemingly fancy flavors. 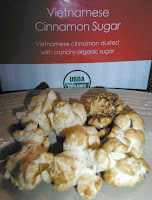 Vietnamese Cinnamon Sugar:
This, the first flavor we tried, made me immediately sorry that I had forked over gourmet bucks for popcorn-- even as a gift.  Although the description tauts Vietnamese Cinnamon as less tannic than common commercial varieties, I found the flavor simply bitter compared to run-of-the-mill cinnamon, which I like.  Eating this particular 479 offering was akin to the disappointment of accidentally putting plain cinnamon on buttered toast when you intended to use sweet cinnamon sugar.  There was nothing sweet about this variety (despite sugar in the title) and the cinnamon was more pungent than anything else.  Moreover, the kernals were were dusted with considerable disproportion, so a mouthful ranged from bitter to tasteless.  I was disappointed and my Dad was visibly unimpressed: strike 1. 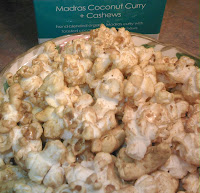 Madras Coconut Curry + Cashews
After a short hiatus, we dove back into tasting the popcorn.  I was immediately bowled over by the extreme deliciousness of this flavor and completely forgot all about the previous disappointment.  The taste combination was pleasantly potent and the cashews impressively plentiful; VM and I were definitely fighting over the bowl.  My interest in the company was restored and my tummy satiated with some of my favorite flavors done extremely well.  This would wind up being my pick for best of the batch, by far, and I would highly recommend. 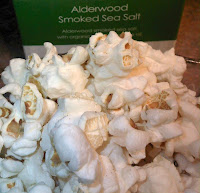 Alderwood Smoked Sea Salt
Soon after the previous success we wanted to try what we assumed would be the most "regular" flavor.  Light and fresh, this variety was subtley flavored with a smokiness that enhanced the delicate taste of salt and was anything but regular.  While I'm not a fan of smokiness in general, this was exactly the type of flavor you'd expect from a line of gourmet popcorn and had the high honor of being the gift recipient's favorite of the bunch.  So, on his behalf, another recommendation. 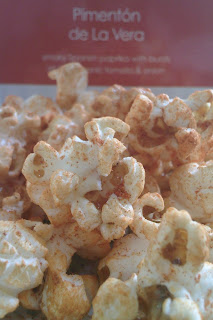 Pimentòn de La Vera
We were 2 for 3 and I really wanted to end the tasting on a high note.  I anxiously busted into the last box and was encouraged by what I saw: heavily seasoned kernels.  I'd recently bought a tin of this type of Spanish paprika boasting a sweet a smoky taste; the popcorn was exactly that.  Not too overpowering, but sufficiently flavored that you didn't need to eat too much.  One disappointment was the amount of seasoning left in the bottom of the bowl after the popcorn was finished; perhaps they could find a better adhesive, so as not to waste the expensive ingredient?  I'd recommend the flavor, as well as the seasoning for your panty.

Despite the unfortunate, original dissatisfaction, the bottom line is that 479 makes a pretty impressive product that is offered in flavors to fit all kinds of palates.  I sincerely appreciate the efforts of any company who caters to vegan customers and 479's assortment does not compromise in taste in order to do so.  The price is a bit prohibitive, but if you manage to choose flavors that you will enjoy, then it is worthwhile for a special occasion.
Posted by Abby Bean at 7:41 AM

Email ThisBlogThis!Share to TwitterShare to FacebookShare to Pinterest
Labels: popcorn