A day's visit to the Vegan Treats shoppe in Bethlehem, PA is always an event.  On this day, it was an eating marathon. 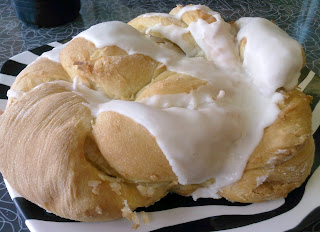 Since we usually go for the mammoth caramel pecan roll, this time we chose an old favorite: the equally humongous coconut roll.  I think I had actually forgotten how delicious it was, filled throughout with moist, yummy coconut.  I know you can't get a sense of how huge it really is, but you'll get the idea when you see below how many donuts fit on the same size plate. 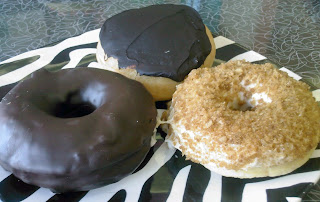 Yes, there were donuts... plenty of donuts.  In the back is their classic Boston creme.  I've been raving about this donut for years, but I think that they changed the recipe for the chocolate topping and I definitely prefer the old style (just in case anyone is listening).  On the right is a new coffee cake donut: a vanilla cake donut covered in cream cheese frosting and some sort of crumbs.  Well, not really crumbs.  I get crumb cakes and coffee cakes confused and I'm always disappointed with coffee cakes because they don't have crumbs; it's a flaw in my wiring.  In any event, I thought I spied an oat within the crumbs and therefore couldn't eat it.  My vegetarian companion claims she saw no such oat, but I couldn't take the chance of crossing healthiness with dessert.  On the left is the oft-lauded chocolate coated angel food cake donut, a veganized version of the non-vegan Entenmann's.  This divine donut is surpassed only by it's devil's food cake counterpart. 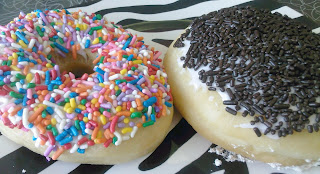 Okay, so there were more donuts.  On the left is the very first Vegan Treats' treat I ever had: the glazed vanilla donut with rainbow sprinkles.  On the right was NOT my favorite marshmallow cream filled donut as I was told (grrr), but instead some imposter filled with something other than marshmallow cream.  Boo, hiss. 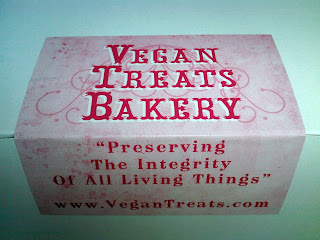 The take-home booty was fierce, but alas sealed against traveling infiltration.  No matter, because THE ICE CREAM MACHINE IS BACK (!) and I had a cup of peanut butter soft serve with rainbow sprinkles for the road.  Ok, I had two but who's counting?  There was a moment of slight panic when we arrived and I realized that the machine was being serviced, but all work was completed while we enjoyed our "breakfast" and it was back in business in time for our departure.  It would have been rude not to have adequately shown my appreciation to the man who was kind enough to be fixing it on a Saturday-- especially when there was peanut butter to be had.  Thank you again, kind sir. 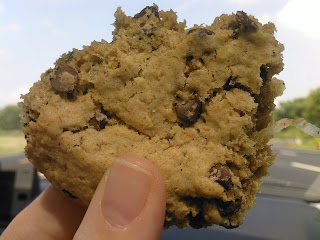 Alas, it is a long drive home and sometimes ice cream requires companion- ship.  Luckily, cowboy cookies escape the confines of the bakery box and are taken to-go in an extremely accessible wax bag.  Behold the generous bounty of coconut, pecans, and chippage.  Then take a moment to admire the "cookie on the road". 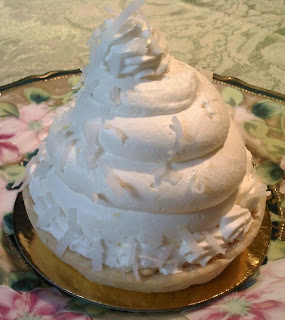 Eventually I made it home, a few minutes passed considerable time passed, and it was time for dinner, i.e., busting into the box.  First up, a summer favorite: coconut cream pie.  While not generally a fan of pie, I really like this one because it's filled with, um, coconut cream.  Just sweet enough and flecked with lots of coconut shreds; I don't think I've ever passed this one up when I've spied it in the case. 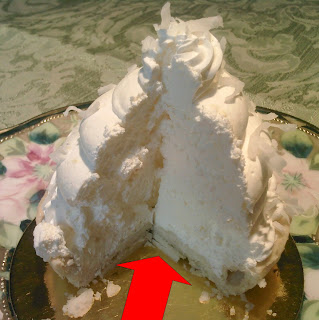 Bonus: I think that Vegan Treats has a new trick that they use to "adhere" the pie to the golden, cardboard disc to prevent unfortunate slippage and ultimate loss of pie: a squirt of white chocolate.  I have not verified this practice, but can think of no other reason why, when I cut into the pie, a luscious, creamy disc of white chocolate inexplicably appeared and jumped into my mouth before I could question where it came from.  Further investigation of the contents of the pie revealed no further evidence of white chocolate; but, just as seemingly invisible apparitions sometimes present themselves in celluloid, so too did the white chocolate bonus that would have otherwise been a secret between me and my tastebuds.  Once again, in case anyone is listening, since the pairing is so pleasant (see the donut hole/truffle success), I would implore VT to line the entire pie crust with said white chocolate before filling with coconut cream, thus increasing the yum quotient tenfold. 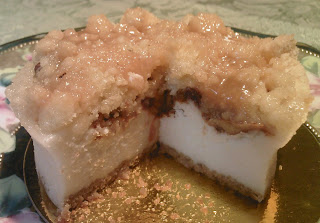 Next is the caramel apple crumb cheesecake, my surprising favorite flavor of all of the traditional cheesecake varieties at Vegan Treats.  You've got your traditional graham crust, plain cheesecake perfection (I don't like when the actual cheescake is flavored and/or filled with bits of any kind), and topped with caramel, apple, and crumb goodness.  Granted, I could do without the actual apples and I usually pick them out, but everything else comes together so well that I forgive their inclusion. 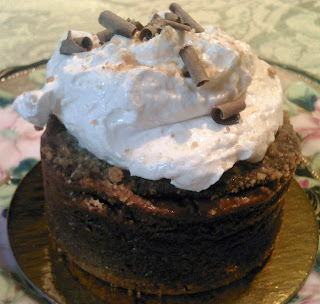 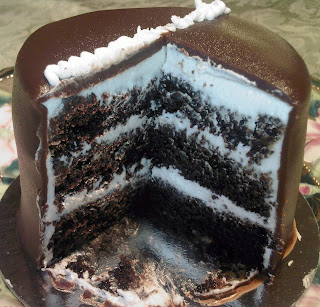 Lastly, I give you the Hostess cupcake inspired cake: one of my all-time favorites.  There are many reasons to covet this cake; for me, it's because it contains so many of my preferred elements of various VT creations.  There's the devil's food cake from the favored donut with the chocolate shell, the marshmallow cream from the center of my favorite donut, and the chocolate ganache coating from my first ever VT cake: death by chocolate.  Plus, it's extremely Hostess-y!

Okay, I'm full just looking at this post.  I hope you are too because I've got nothing left for you.
Posted by Abby Bean at 8:34 PM