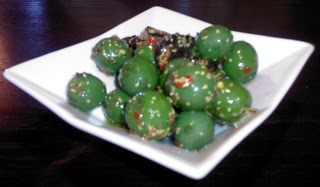 Here's the thing, we are city girls.  And by city, we mean NYC.  No offense, Philly, but we are New York girls through and through; your city is not our city.  We are huge fans of Horizons (the only place VM will willingly eat tempeh), but between Philly's congestion and parking issues, the trek never seems to make it high on our priority list.  Enter Sprig & Vine, a new, vegan, restaurant also in Pennsylvania, but situated in an area that is easy for us to drive to AND has uber-convenient parking: making it much more accessible to us. 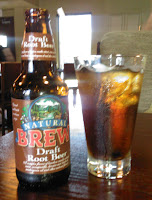 We arrived hungry, of course, but also very thirsty and unaware that Sprig and Vine is without a liquor license.  Pining the absence of a fruity, alcoholic concoction was fleeting; we quickly recovered with the cool and refreshing Natural Brew draft root beer.  Finally, the root beer equivalent of China Cola!  Absolutely delicious & I even had two (I wasn't driving).

First order of food business: olives!  Or, to be more precise, marinated castelvetrano olives with aged black garlic, chile, and mustard seeds.  When there are olives on the menu you can be sure that they are in both of our minds, so we ordered these beauties without hesitation, even before having read any further on the menu than the second offering.

We thought that the black pieces were some kind of olive slivers and I tasted one first.  While I knew immediately it wasn't an olive, I could not put my finger on precisely what it was.  It turned out that was the aged black garlic: completely different, less potent, and significantly more enjoyable than a sliver of ordinary garlic.  I'm not sure if you're actually supposed to eat it or if it's just there for flavor, but I liked it and ate every bit.  VM, on the other hand, tasted it and passed; the texture was not for her.  The olives themselves were divine and plentiful, although we did wonder why they don't offer an assortment instead of a plateful of one variety.  Most excitingly, the pit bowls were a classy touch.  We've eaten bowls full of olives at many swanky establishments over the years, and neither of us can recollect ever having been presented with a stone receptacle of any kind. 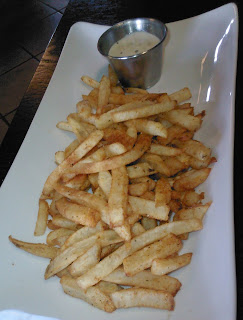 Since all of the sandwiches come with the bonus of a small, refreshing, pleasantly dressed salad, we decided to augment our lunches with an order of kennebec potato fries, served with grain mustard aioli.  I misread the menu thinking that it was garlic aioli, and then waxed culinary, "expertly" deducting that the special secret ingredient was mustard seed.  Considering my culinary expertise is pretty much limited to a scale of yum, you'll forgive me the misread and subsequent "epiphany" and just believe me when I tell you unequivocally, the aioli is addictive.  The fries themselves are shoestring and lightly sprinkled with a mild-flavored, unidentified spice.  The single disappointment in this dish was that there were so many undippable, minuscule fries and fry crumbs: noticeable within every order that was served around us.  This certainly wouldn't prevent us from ordering this yummy side again, but it is curious.

Onto the sandwiches.  Before you do the math, I'll just come right out and say that we couldn't decide and ultimately ordered more sandwiches than mouths at the table.  We're not proud, and neither should you be when you are faced with too many choices of delicious, vegan grub.  Oh, the horror. 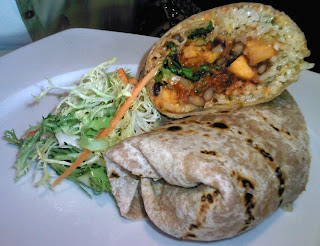 One selection was the sweet potato-black bean chile burrito with scallion cilantro rice and smoked paprika aioli.  Served warm, this was an extremely tasty, lightly spiced sandwich that relied upon all of the fresh tastes and textures working together: which they undoubtedly did.  Besides garnering a thumbs up from both of us (even tastier as leftovers!), I am happy to report that the cilantro was completely undetectable. 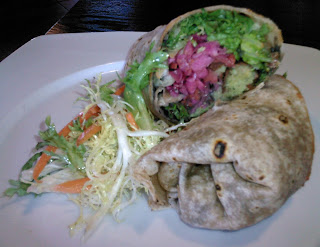 The next choice was the edamame falafel wrap with black sesame tahini and pickled vegetables on a whole wheat tortilla.  The falafel was completely non-greasy and had a superb, dreamy creamy texture.  Highlighted by the pickled red cabbage and cool lettuce, this was another double thumbs up.  VM is a big HUGE fan of falafel sandwiches and this was her absolute favorite bite of the day: quite a falafel achievement. 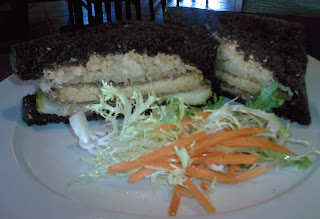 Even though I knew I'd be tasting this one on my own, I couldn't pass up the caraway-crusted tempeh reuben with thousand island dressing, pickles, and sauerkraut on grilled pumpernickel.  Because of it's considerable crust, from the back this sandwich looked like it was going to be all bread.  This was not the case at all.  In fact, not only was it stacked with a sizable hunk of tempeh, an ideal amount of dressing, thick pickle slices, and generous kraut, but the misleading bread turned out to be the star of the show.  Besides boasting the deepest pumpernickel taste I've ever encountered, the significant crust practically formed a seal that prevented the contents of the sandwich from oozing out the back when I took a bite from the soft center; it was like magic!  Someone should seriously patent it for this purpose.  I'm going to be rich... 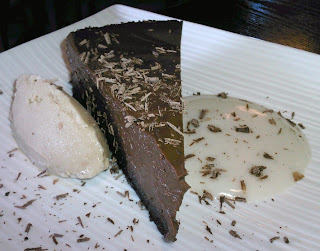 You wouldn't think we could, but we did (for the record, we did bring home lots of meal leftovers).  While there were many interesting dessert options, we tend to err on the traditional, chocolaty side: this day being no exception.  So, even though it wouldn't ordinarily have been our first pick, we selected the chocolate mousse cake with coffee ice cream and creme anglaise.  This turned out to be an unexpected success.  Neither of us are mousse fans, but this was thick, dense, and fudgy: unlike any mousse either of us has ever had.  Layered upon a rich, dark chocolate, cookie crust and sprinkled with chocolate shavings... chocolate x 3?  Yes, please.   Even though VM avoids coffee ice cream, she enjoyed this one as much as I; I suspect this was because it tasted a bit coconutty.  I presume it was made with coconut milk, but I was surprised that it melted rather quickly into a watery puddle.  Don't fret; we simply ate it more quickly!  Finally, I was a little afraid of the creme anglaise because 1) it sounded so eggy and 2) I'd never seen or eaten it before-- vegan or non-- and it initially struck me as being a little gelatinous.  Not only did it turn out to be smooth and creamy, but it too had a delightful and unexpected (I don't recall it being mentioned in the menu description) coconut flavoring.  A successful end to a delicious meal.

After this incredible, vegan feast I can only lament that the solitary omission of the Sprig & Vine experience was the demonstration of a distinct personality.  The visual and audible touches lend themselves to a warm and beautiful atmosphere, the food is outstanding, but there is an overall and glaring welcome deficiency.  Both the host and hostess were faultlessly pleasant and efficient, but seemed only to be going through the motions.  The two people in the kitchen who met our eyes as we were leaving barely cracked a smile, let alone offered an acknowledgment or shared a word.  It takes immense effort, time, and money to start any business, let alone a restaurant (vegan, no less!), so we really wished that the charm and essence had presented in a manner equivalent to how the food and atmosphere shone.  The lacking identity is simply the difference between Sprig & Vine being a terrific restaurant and an extraordinary one.  Highly recommend.
Posted by Abby Bean at 7:59 AM