It was a bit of a rainy day for the 2010 Woodstock Farm Animal Sanctuary annual June Jamboree, but it made for a new experience with the animals. 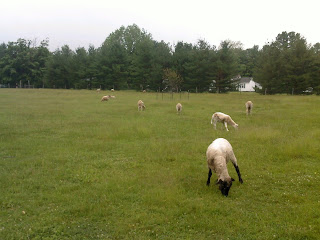 When we arrived the rain had subsided a bit and, as far as the eye could see, there were goats a' grazin' (and sheep).  Soon after, though, a drizzle began, quickly turning into a sprinkle.  Everyone: goats, sheep, pigs, and people were hightailing it back to the barn. 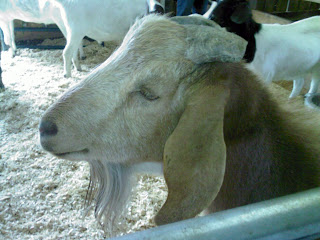 I suspect that most of the human visitors were not disappointed by this turn of events, as it put them up close and personal in very close quarters with many more animals than are usually indoors at one time. 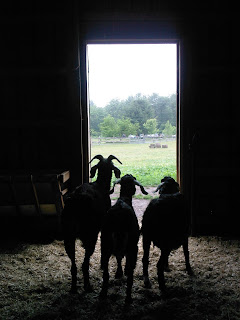 The animals, however, were very much looking forward to returning to the pasture, and anxiously waited for the rain to cease! 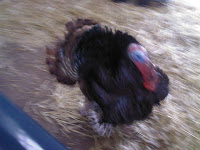 The rain seemed to make everyone a little skittish; many of the animals uncharacteristically moving entirely too fast for my super slow camera.  This new turkey was a pretty quick pacer (I suspect possibly under sunny circumstances as well), so unfortunately this was the best photo I could get of his colorfully, attractive self. 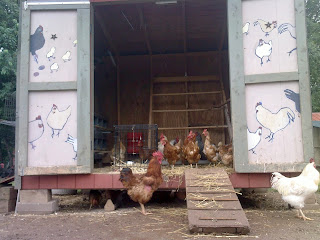 Even the friendly chickens were a wee bit out of sorts from the weather, staying close to (and under) home.  While not as open to pets as usual, they had no objections whatsoever to being admired.

Our normal visiting path was interrupted due to the rain; in favor of shelter I regret that we bypassed the white chickens and neglected to return.  So, you'll have to make due with another picture of the colorful birds until I can make up for my omission on the next visit. 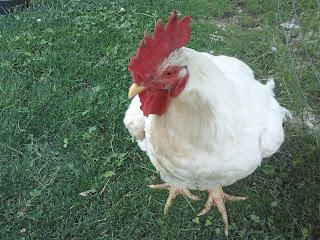 You may also make due with this very white, snazzy rooster.  Such a beautiful headdress, and obviously very modest. 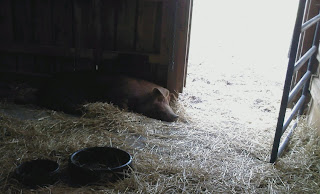 In addition to "the regulars", we were happy to have had the opportunity to meet the new arrival, Pete, an extremely handsome, svelte, auburn pig.  Like most pigs at the sanctuary, Pete was napping for the duration of our visit: not at all phased by the crowd, the weather, his roomie: the pacing turkey, or feline and rooster passers-through. 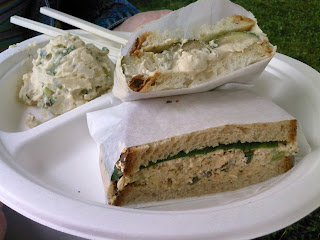 The food tent was perhaps even busier than usual because of the weather, and we enjoyed a few, tasty, picnic-suitable offerings from The Regal Vegan.  Dijon potato salad, a half sandwich of hummus and roasted vegetables (zucchini & onions), and a half sandwich of chipotle tempeh salad with capers (!). 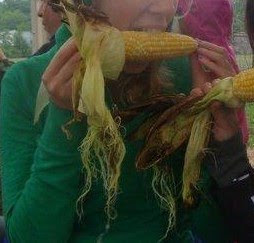 The in-husk barbequed corn-on-the-cob slathered in chipotle lime butter was the favorite vittle of the day, but we were too sticky (and enamored) to photograph whilst eating.  In lieu of my own, for your consideration I submit this photo of fellow Lula's fans enjoying theirs cobs. 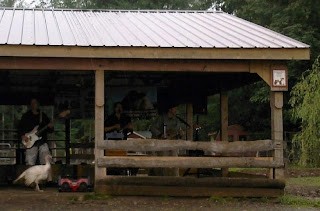 In addition to the main attraction: the animals, and the food (lunch, snacks, dessert), there was plenty of music to set the jamboree mood and obscure the drumming of the raindrops.  Even the turkeys were getting down with the grooves. 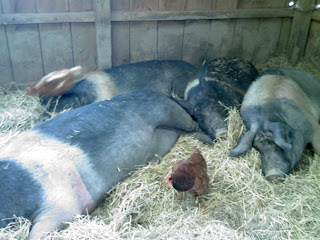 Rain or shine, I usually find my pig friends indoors in intimate napping piles; this day was no exception.  So comfortable, barely an eyelid flutter gave any indication that they were acknowledging your presence as you pet them during their slumber.  While the roosters are often trotting about, you'll notice that on this day they were boldly trotting upon. 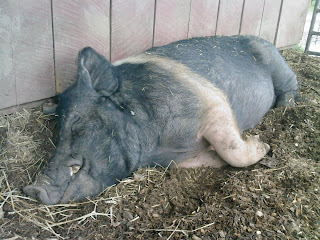 One pig was unphased by the rain and was frolicking outside all by himself.  This one couldn't decide, and made the concession to be outside (under cover), but remained napping.  So sound asleep, he did not even blink when I pet him.  Then again, maybe he was ignoring me. 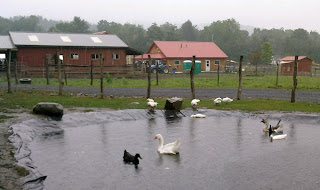 Finally, we got our first glimpse of the new, gigantic, duck pond.  Lots of ducks and geese...and Quincy all grown up from a fuzzy, yellow, chick-teen into a proper, white duck with many new friends! 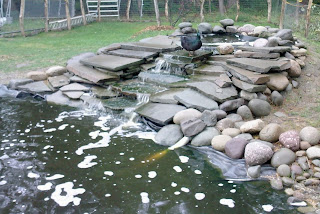 I didn't catch his name, but this is another particularly attractive addition to the giant pond.  It was nice to see someone taking advantage of the architecture.

Can't forget the chocolate brown bunnies.  Is that the biggest paper towel roller you've ever seen, or what? 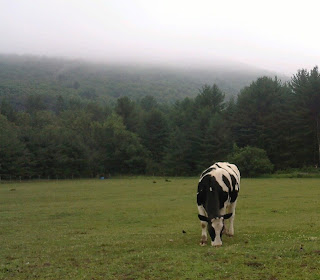 And, in closing, one of our favorite sanctuary inhabitants, Dylan, against the backdrop of  the misty, picturesque, New York surroundings.