Another trip to Woodstock meant another stop at Karma Road. 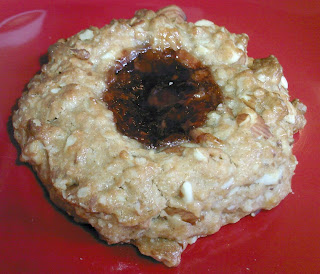 Since we were attending the Jamboree and there was going to be food at the sanctuary, we didn't want to fill up.  So, we simply had a light breakfast and enjoyed the break in driving...given that we had a much shorter distance to travel than we'd already driven.

Unless it's filled up with all kinds of milk, sugar, syrup, etc., I'm not really a coffee drinker.  VM is and likes hers black; she says Karma's is always piping hot, fresh, and delicious.  While I didn't have one, as we were leaving I noticed what I think was a new addition to the smoothie menu: Wake Me Up.  If memory serves, it contains cocoa, banana, peanut butter, coffee, and your choice of milk: definitely on my list for next time.

Onto the important stuff food: 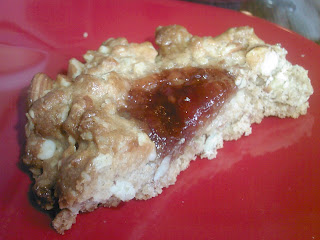 I was considerably disappointed that the day's rotating goodies did not include my favorite pumpkin chocolate chip cake, but I managed to make do.  With a trip to Vegan Treats impending I was trying to eschew chocolate, so I uncharacteristically chose a strawberry nut thumbprint cookie.  Though technically considered a "cookie", the strawberry made it through my no-fruit-as-dessert detector because I was eating it as breakfast.  Extremely crunchy and nutty with just the right amount of jelly, VM & I both enjoyed this selection. 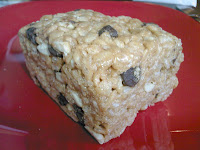 I suspect because she was originally going to choose what I did, VM, in turn, uncharacteristically chose the brown rice crispy treat with nuts and chips.  As a super fan of Sweet and Sara's new version I didn't want to chance it, but begged agreed to share hers nonetheless.  As it turned out, this is not by any means intended to be a marshmallow square.  Instead, it proudly is what it is and what it is is a treat that's exceptionally good on it's own merit.  Thoroughly enjoyable, it's chock full of whole cashews & chocolate chips, sweetened with agave; it wasn't trying to be a marshmallow treat and didn't have to be.

Like all of the baked goods at Karma Road, our choices for the day were yummy, but undoubtedly healthy.   Two modest selections with minimal chocolate and we still left happy; what is the world coming to?
Posted by Abby Bean at 6:09 PM