Back to the Roots: Celery Root

Last year at the PSU farmer's market, I was offered a sample of something that looked like a sauteed bamboo shoot.  It turned out that it was actually celery root; the taste was unusual and delicious.  I recently got my hands on one of my own in the hopes of preparing it the same way.

While googling preparation instructions, I learned that you can eat celery root raw or cooked.  Either way, it has the unmistakable smell and taste of celery, with the texture and crunch of a carrot.  I learned from my New Whole Foods Enclopedia (no, not that whole foods; just whole foods) that the reason is because it's actually in the carrot family; who knew?  I've since decided that it would make a great and interesting crudite/conversation vegetable.


The size of the root was deceiving; despite all of the chunks that I ate raw, there was a lot left over to saute.  Prepared with lots of onions, some garlic, salt & pepper, it  had a very pleasant taste but wasn't a huge hit.  I think the celery/carrot novelty wears off relatively quickly, as did my supply of Secret Aardvark- which, coincidentally, pairs extremely well with sauteed celery root. 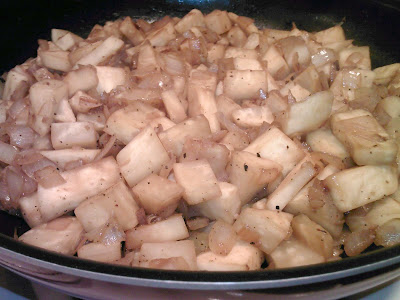 Having had my fill of the sauteed cubes, I decided to mix the leftovers with some broth in order to make a celery root soup.

﻿
﻿Since I don't have a Vitamix (a fact that I am reminded of often by a friend [see comments]), it was significantly chunkier than I presume it should have been.  And the fact that it looked like chunky apple sauce didn't make it very appetizing.  But it was decently pleasant, if not missing a special something that the sauteed dish was missing as well.  Any must-try celery root recipes?  My root preparation seems to leave a lot to be desired.
Posted by Abby Bean at 9:44 AM

Email ThisBlogThis!Share to TwitterShare to FacebookShare to Pinterest
Labels: roots