With all the snow of late, I've been cooped up in the house with nothing to do but cook.  Since my cookbook collection contains primarily Isa and Isa & Terry tomes, it's no wonder that in the span of two days I amassed the spoils of three of their recipes.

The first night I tackled Hottie Black-Eyed Peas & Greens (p. 119-120) from Isa's new Appetite For Reduction.  My go-to collards & black-eyed peas recipe contains coconut milk, so I was interested to try one that didn't.

I substituted 1 pound frozen collards for 1/2 pound fresh, upped the liquid accordingly, and used quadruple the onions.  But the main adjustment was that, despite Isa's suggestion to the contrary, I used Sriracha...and lots of it.  LOTS: in and atop.  The meal was hearty and healthy and, best of all, all cooked in one pot.

With some vegetable broth leftover, the next afternoon I decided to finally tackle Isa's PPK Broccoli Curry Udon soup.  I found it a few weeks ago, but a friend with similar taste beat me to it and provided me with some tips.


This recipe used significantly more pots, pans, and bowls than I'm used to, but I've got to say that the result was worth it.  I should note that even with my extra cup of broth the soup had a significantly higher proportion of contents to liquid, so I served it with a spoon and fork- which you'll need for the unwieldy noodles anyway.  Also, if you like your food piping hot, plan to heat the whole concoction for a few extra minutes before serving.

At this point I had coconut milk left over so I used that as an excuse decided to make Isa & Terry's VCIYCJ Magical Coconut Cookie Bars (p. 121-122).  I've never made them before, but they were one of my favorite things served at the book launch.  Once I'd started I realized I had less than the exact amount of certain ingredients, so I decided to cut the recipe...by 1/4.  Normally people halve or double a recipe, but I seemed to have exactly 3/4 of each ingredient and I wanted to make as much as possible.  This would have been fine...if I were any good with fractions (I did know enough to use a smaller pan). 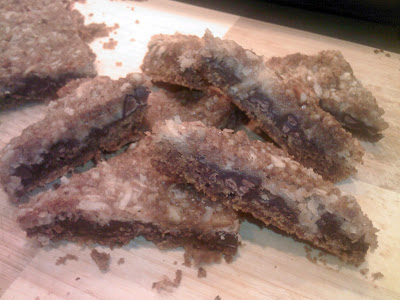 Other than that, I subbed Biscoff cookies for the graham cracker crumbs- an awesome flavor addition.  Note that I did use a bit more butter; apparently Biscoffs are dryer than graham crackers (?).  Oh, and I take full responsibility for my laziness having accidentally pulverized my pecans in the Magic Bullet instead of chopping them by hand.  The nutty dust wasn't pretty, but that didn't affect the taste of the bars, which were a hit.
Posted by Abby Bean at 6:34 PM