To Pancake or Not to Pancake at the Pancake House

Despite being a chocolate chip pancake aficionado from way back, on my last visit to the Rutherford Pancake House I was (embarrasingly) won over by the savory breakfast offerings.  While my meal was terrific, I left full of regret and devoid of maple syrup.  This time I swore it would be different.

When we entered, my eyes were immediately drawn to this sign boasting Vegan Challah Bread French Toast Stuffed w/ Sweet Cream and Strawberries. 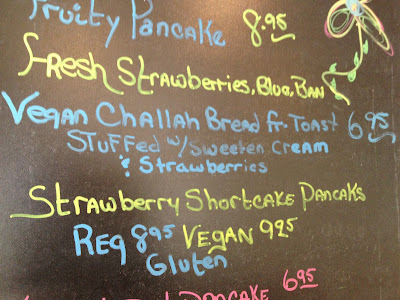 A creamy (seemingly vanilla), fruity breakfast isn't generally my idea of a good time (chocolate chips FTW), but the fact that it was such a generally spectacular and totally unexpected vegan offering had my wheels turning and my stomach rumbling.  I did peruse the menu*, but my decision had already been made.  VM tried to tempt me away from a sweet breakfast with her savory lunch choice, but I held firm.  I double-checked with the waitress that it was definitely, completely vegan and had a special moment when she soon after instructed VM that the cheese on her veggie burger was "real" and, therefore, not vegan.  Good looking out!

While we waited for our meals I ordered a vegan egg cream.  What do you expect?  There it was on the menu, just waiting to be ordered.  It was good, but had a slight aftertaste- probably from the syrup. 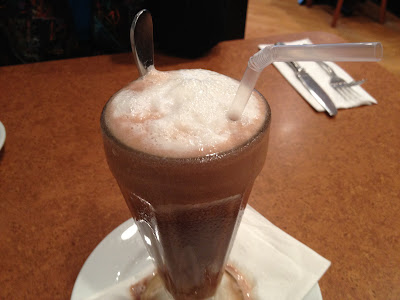 VM's veggie burger looked completely awesome; there she goes with those impressive ordering abilities again.  She told me it was delicious and just as good as leftovers.

As for mine?  Hmm.  Ok, fresh fruit always puts on a good show, but this French toast was definitely not any kind of Challah bread I'd ever seen.  Rutherford, I ask you; do you really think this is what Challah looks like?  Because the whole point of Challah and, by extension, Challah French toast, is that it's thick and doughy; this looked like regular pre-packaged bread slices to me. 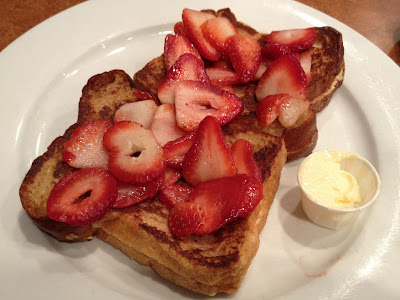 At first I thought the cream was missing, but there it was between the slices of white bread- kind of like a sandwich.  It was smooth and slightly thick- a consistency like nothing I can relate it to, but altogether pleasant.  It was mildly sweet and- dare I say- slightly cheesy?  Slathered with maple syrup it was tasty...buuuuut, still not Challah. 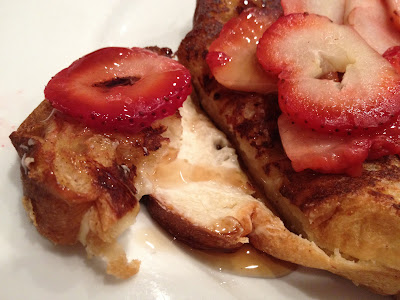 And then came the drama.  For some reason my breakfast appeared on the bill as $9.95 instead of $6.95 as advertised on the specials board; no big deal.  At RPH you pay at the counter, so we simply pointed it out at the register to the manager/owner (?).  Without skipping a beat, the snippy reply was something along the lines of the fact that obviously the specials board was wrong.  Really?  And who's problem might that be?  We suggested that he check the board and he informed us that he believed us, but that it didn't change the fact that it was obviously wrong.  Ok, I didn't write the sign and I'm not psychic; now what?

At this point there was an awkward silence wherein I can only assume he thought he could wait me out and that I would simply give in to the unnecessarily uncomfortable situation and pay the higher price.  Not with an attitude like that I wouldn't!  It was turning into quite the standoff and then it happened: to add insult to injury, he began explaining how everything- including the bread- is made fresh daily.  Um, by Pepperidge Farm?  Come on.  The bread?  That's how you're gonna play this?  Let's not go there.  Even if this loaf was homemade, it was not Challah!  Which means that on top of charging me wrong and then annoying me about it, I could accuse you of false advertising.  And besides, am I supposed to pay more than advertised because you're telling me it's homemade?  Just fix the bill and let me be on my way already.

Eventually Mean Bean face prevailed in the silent stare-off and he slammed the price adjustment into the computer and made a show of crumpling the incorrect bill and throwing it on the floor.  Now why ya gotta have a nice, vegan-friendly menu and then act like that?  While I appreciate the vegan love, I do NOT appreciate the attitude.  We spent the whole meal talking about why there weren't more places like this one and how we should visit more often, and then a bad attitude ruins it all.  I don't fault you for a mistake, but I do fault you for mishandling it.  Bad form, RPH, and no reason for it.

* For some reason, the online menu doesn't nearly give you an idea of how many vegan offerings RPH has to offer.  In person, the word vegan is all over the actual menu and there are many options in each category.
Posted by Abby Bean at 7:11 PM