222 Veggie Vegan Restaurant came highly recommended by someone we don't always agree with on all things gastronomical.  But, since we'd received a thumbs up from other vegans we met during our travels, we decided to give it a try. 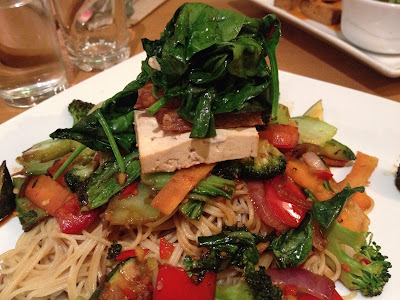 We'd had yet another long day of running around in the cold and were dealing with significant, (now) expected, weekend tube closures when....significant, unexpected tube closures got the best of us.  Luckily, an American student studying abroad overheard our discussion on how to plan an alternate route and kindly guided us through all of the necessary transfers, as they happened to be in her direction.  We wondered, as we were walking from the tube to the restaurant, if we should have invited her to join us; but, ultimately decided that two ravenous vegans trekking across London for a meal they were sure to inhale mightn't have been the best way to have communicated gratitude.  So, thank you, Isabella from Florida; know that we were ridiculously grateful to you when we finally got to the restaurant. 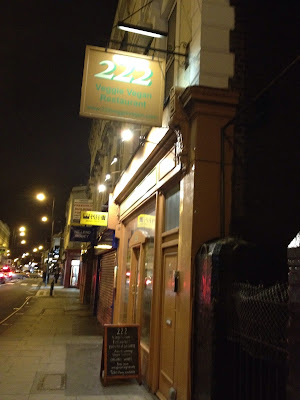 Buuuuut, remember when I said it was UK's Mother's Day? 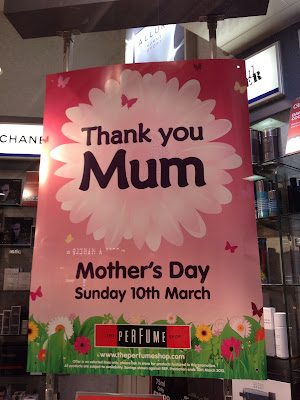 Well, that happened also to be the Sunday evening we decided to show up at 222 without a reservation.  Yep; that's a full house. 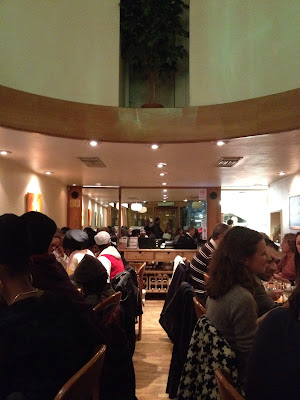 The hostess/waitress who greeted us was kind enough to hide her mortification over the fact that we hadn't expected to have needed a dinner reservation on Mother's Day. She was visibly frazzled from the demands of the crowd, but nevertheless so incredibly patient as we explained that we'd come from New York, on a recommendation, not knowing Mother's Day differs by continent, and really wanted to eat there. Out of the goodness of her heart she allowed us to remain, waiting, for as long as it took for a table to open up that wasn't immediately filled by someone who actually had the forethought to have made a reservation; this took a while. She periodically threw us pitying glances, and we were extraordinarily grateful that she didn't tell us what we probably deserved to hear, which was that they were booked, the staff was tired, and we couldn't wait.  THANK YOU for being so pleasant and understanding!

By the time we were seated we'd spied just about every menu item prepared and presented.  We decided to share the heart's desire appetizer: specially selected artichoke hearts sauteed with fresh, aromatic herbs, served on a bed of rocket leaves with a roasted red pepper sauce.  I can't say for sure if this picture is blurry because I was hungry or because it was so good, but really: it was SO GOOD.  You know artichoke hearts in a can?  Well, then you should be ashamed of yourself; that's an insult!  This dish was fantastic. 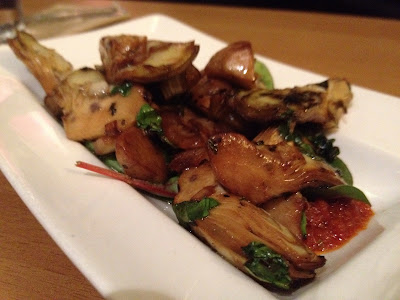 For dinner I chose Ben's special: stir-fry with organic wheat-free noodles, prepared with seasonal vegetables and your choice of seitan or marinated tofu.  I chose the tofu and I can't really explain that seemingly un-prepared piece in the middle, but the other marinated slices were magnificent.  The dish was enormous, hardy, and chock full of fresh veggies perfectly prepared so that they retained their crunch; it was just the kind of meal I was in the mood for after the events that finally led to sitting down to our meal. 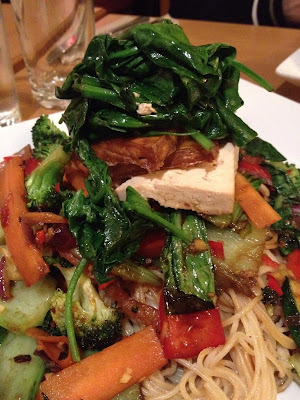 Incidentally, this item isn't really a special; it's on the permament menu. Order it!

My equally weary travel partner selected the vegan roast: hearty vegetarian roast with potato and parsnip mash laced with fragrant herbs.  Served with onion gravy and steamed french beans.  Let me explain: those things that look like fries in the bottom right corner are actually seitan sticks- prepared like no seitan I've ever had, but really inventive and delicious.  What looks like a pastry-puff on the left is actually the mash, which had a very thin layer of deliciousness surrounding it that I couldn't possibly explain.  The veggies were more of the delicious mixture I'd been graced with, and the gravy was light and creamy, deserving to be poured over everything. 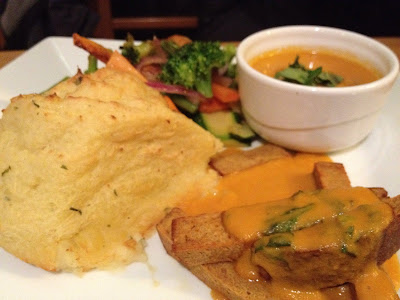 Isabella, our tube fairy, probably wouldn't have understood all of the trouble we went to in order to get to 222 on this particular day.  She most definitely wouldn't have understood waiting for over an hour while the view and smells of every spectacular dish that emerged from the kitchen taunted us.  But you probably already know what I'm about to say: it was worth it.  Thank you so very much to all of the kind, hard-working staff at 222 who allowed us to stay and wait, and never failed to pass our table without smiling.
Posted by Abby Bean at 6:53 AM