I've been meaning to go to Vedge Restaurant, the newer establishment by the former Horizons' owners/chefs, for way too long.  Thankfully, some friends and I made a plan to go before Chef Rich Landau recently won his episode of Chopped.  It was hard enough to get a reservation before; now it must be near impossible. 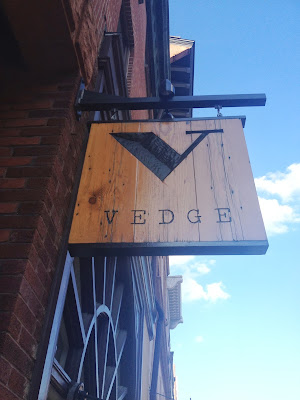 I was a newbie blogger when I'd visited Horizons; my short review and lack of pictures (blasphemy!) is not a sufficient representation of how much I enjoyed my meal.  Everything was so amazing that I kept eating long after I was full and actually had to unbutton my dress in the car on the way home because I was afraid I'd explode out of it otherwise.  Never mind my organs, I just wanted to save on dry cleaning.

The anticipation for our Vedge reservation was exciting.  When they called to confirm, I scared the person on the other end with my shriek.

We'd already had a long, hot day in Philly by the time we made it to Vedge, so we were especially ready to be wowed. 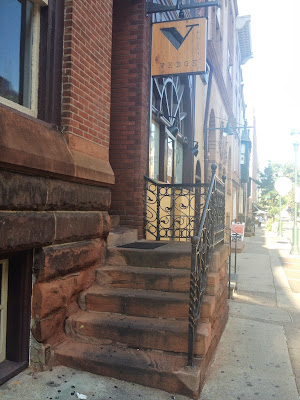 We had a later reservation, so Happy Hour was calling our names. 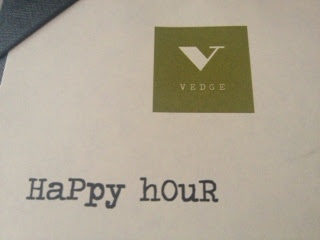 I immediately let the host know that we were over an hour early for our reservation with the intention of enjoying Happy Hour in the lounge.  He calmly (clearly none of the Vedge staff was as excited as I was) informed me that the only place happy hour was available was at the bar, and punctuated his statement with a glance at the already full room.  Although he didn't seem to care either way, as luck would have it: four seats opened up at the bar at that precise moment.  But I was still perplexed; I knew I'd read about a cocktail lounge on the website.  My recollection was confirmed when I opened the Happy Hour menu.


I couldn't help but to do a little investigating and ultimately found a small room off the left side of the bar.  It was filled with large chairs and small tables: enough to seat about 12 people in a space that a NYC restaurant could fit 30.  So, it was real.  In fact, the couple that came in right behind us was escorted right in.  My guess is, either you need a special reservation for that room or, more likely, a secret password is required.  I'm onto you, Vedge! 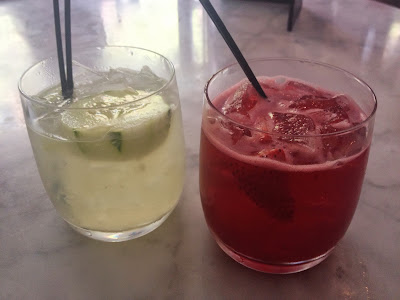 And the bar onto which multiples were placed: 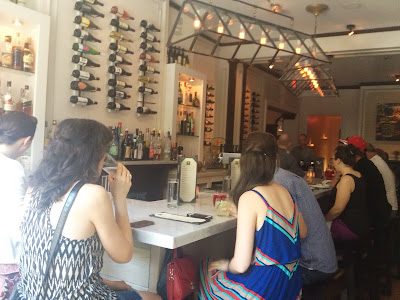 I was way too dehydrated to partake in libations just yet, so I concentrated on the Happy Hour menu food offerings, of which there were five.  Five people, five options: it was a no-brainer. Disclaimer: the HH photos are a bit light and blurry because it was very bright in the pretty space.  Rest assured that everything was plated with considerable thought and devoured with gusto. 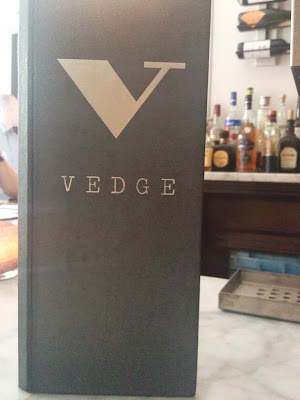 Korean seitan taco: I had the same experience here as in Horizons in that I don't love seitan, but I loooooved this appetizer.  A woman next to me at the bar said she comes in for this and a glass of wine when she wants to treat herself; I don't blame her.  The tortilla was soft and the seitan was flavorful and tender. 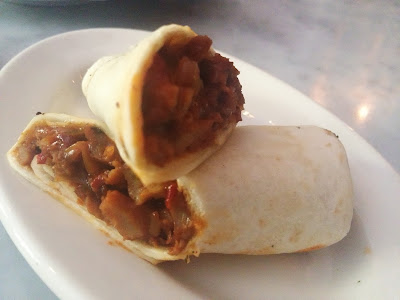 curry wedge fries: we couldn't really decipher the dipping sauce, but it went quite nicely with the giant, crisp fries. 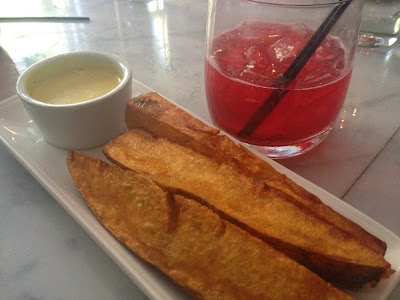 smoked mushroom sandwich with white bean sauerkraut puree: the sauerkraut gave this sandwich (the top piece of bread is in the rear) a really nice tang that complemented the sweetness of the smoky mushrooms. 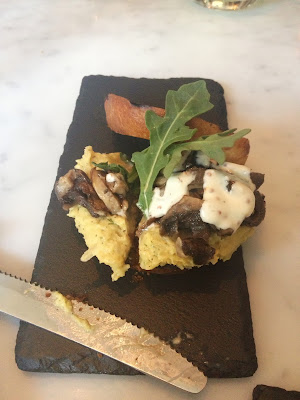 Kung Pao Cauliflower: such great flavor; can this dish be on every Chinese restaurant's menu in New York, please? 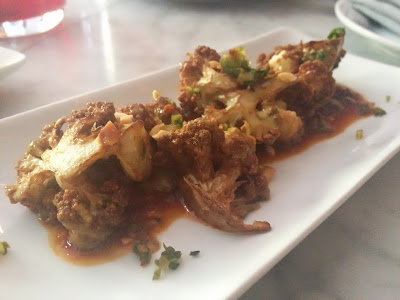 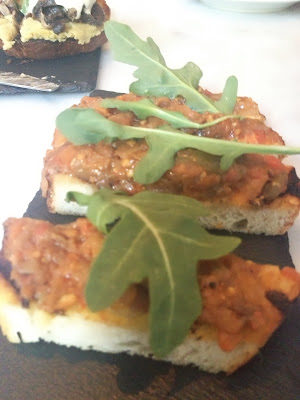 It's not easy splitting five small appetizers five ways, but we did it! 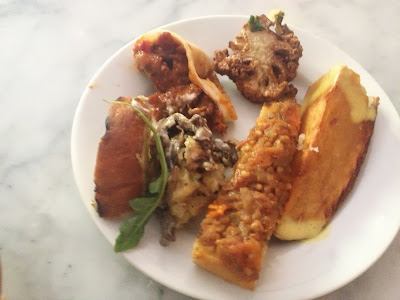 And then it was time for dinner...and, for me, a drink.  My Kyoto sour: junmai sake, cucumber, grapefruit, agave, lemon was light and refreshing.  If I wasn't driving, I'd have said to keep 'em comin'. 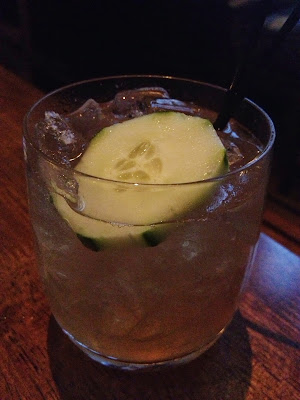 The dining room was stunning in an understated way.  It was also packed with guests, which is why I only photographed this detail. 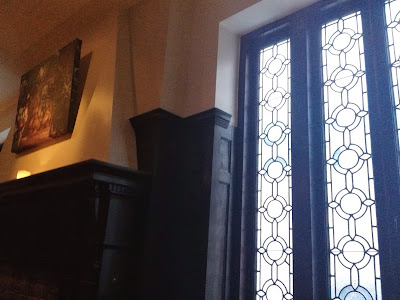 You'll notice that as the pictures of our meal wear on, they will become increasingly darker.  The culprit?  The falling sun, which sometimes made it a bit too dark for my photographs to sufficiently capture the detail of the plates.  But, you'll get the idea.

As we were all visiting Vedge for the first time, our waiter gave us excellent ordering guidance.  Even so, between the "for the table" options, the "plates," and the "dirt list" it was hard to both narrow down what we each couldn't leave without tasting as well as to consider the predilections of five different dining palates.  In the end we chose a great assortment of dishes AND were excellent sharers.

These were our selections from "for the table" options:
house made pickles: I can't say we weren't collectively disappointed that this was a dish of house-made pickled vegetables instead of actual pickles, but the carrot/cauliflower/as-yet-unidentified-vegetable combo was still devoured.
peel n eat lupini beans: piri piri, fried garlic: this was the most fun dish of the night!  Reminiscent of this green garbanzos in the pod fiasco, we weren't- at first- certain of what we were attempting to peel off.  One of us finally cracked it: a thin shell slightly firmer than on a chick pea was encasing the bean.  While I removed it on the many that I consumed, most of my friends ate them peel and all to no dismay.
charred shishitos: nora pepper aioli: these elicited the most giggles of our choices, as it turned out the tasty peppers worked out to $1 each. 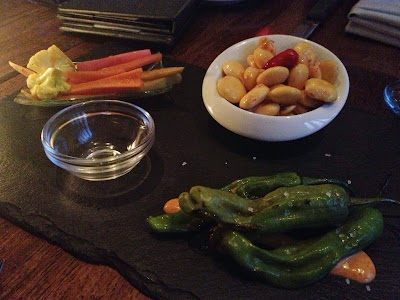 Have you ever been to a restaurant where one table is having so much fun that you can't help but to glance over now and again to see what those folks are doing?  We were that table.  Despite the friendly instructions from our extremely patient waiter who promised to time our dishes appropriately, we found it difficult to make all of our selections at once.  So we just kept eating and ordering, discussing what we'd eaten and what else we should eat, and eating and ordering again.  It worked out well for us.

These were our selections from the week's "dirt list":
A word about some of the menu descriptions: many of the offerings included an ingredient that we were unfamiliar with.  As none of us had any allergies, we agreed to just go with it rather than to ask for specifics.  Vedge deserves this kind of trust; we knew their food had earned it from when we'd first become acquainted...at Happy Hour.

French beans & English peas: mushroom escabeche, preserved lemon: a terrine of the freshest beans and peas I've ever eaten, along with mushrooms cooked in such a way that a mushroom hater didn't even realize he was eating mushrooms. 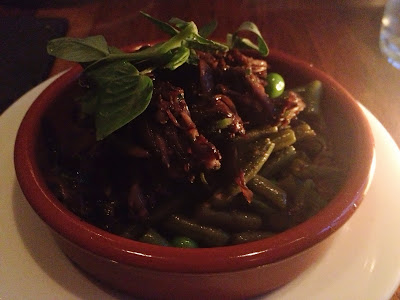 cocozelle & yellow zucchini: pesto trapaneze: After all the sad, oily, limp zucchini dishes I've been served at omnivorous restaurants over the years, I generally don't order them out.  But, the friend who expressed interest in this dish was our lightest eater, so it was only fair to defer to her choice.  Shows what I know: it wound up being one of the favorites of the table. 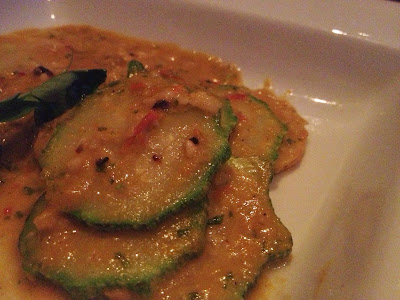 Brussels sprouts: shaved & grilled, smoked mustard: I love everything about Brussel sprouts (and mustard), so I prefer them simply halved and roasted.  This preparation was a little fancy and over-dressed for me, but it was still delicious. 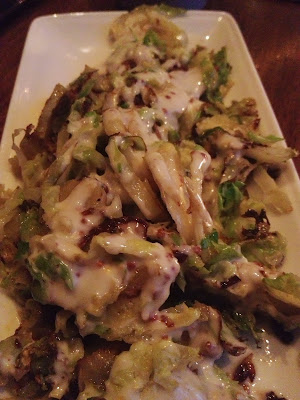 fingerling fries: creamy Worcestershire: While I've never met a fry I didn't like, these were EXCEPTIONAL.  As much as I'd hate to choose, if you find yourself in a position where you can only have one order of fries, choose these. 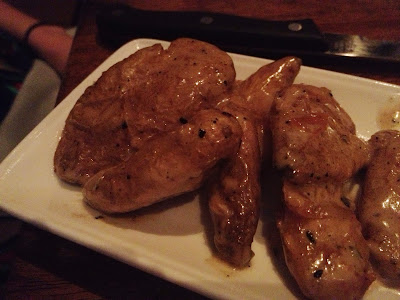 At some point during our feast we each were presented with a single slice of (presumably) house-baked white bread and herb-filled oil for the table.  I thought the white bread was a somewhat doughy choice, but didn't have to worry about filling up on it; it was purely a one slice per person deal. 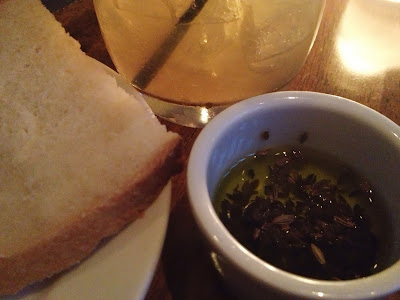 Aaaaand, still eating.
These were our selections from the "plates", which we agreed erred a little on the small side:

spicy grilled tofu: gochujang, edamame, smoked miso, yuba cracklin: while the grill marks were impressive, the tofu's preparation was nothing out of the ordinary.  It was tasty, but I expected the gochujang to pack more of a punch.  The edamame puree was a nice substitute for peas or mash (or mushy peas). 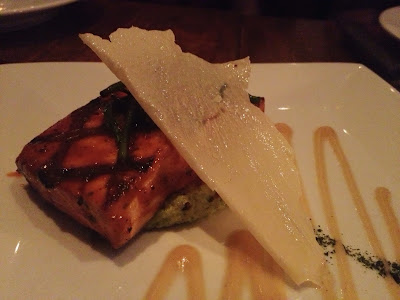 grilled seitan: swiss chard, smoked tahini, pickled turnips, za'atar: the seitan lovers in the group went a little gaga over this dish and even I liked it. 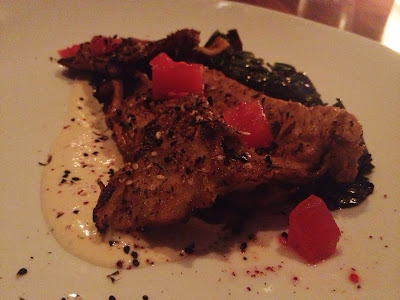 All told, we ordered 14 dishes for 5 people.  The suggestion had been 3-4 each and although we fell a bit short of that, we were all incredibly satiated.  I wouldn't dare utter the word full, as it was about that time that we took a vote and decided that while we had done an impeccable job sharing our meal, dessert was going to be a solo effort.

One friend abstained altogether (boo), but another chose the pomegranate jelly donut: halva ice cream, sumac marshmallow.  There were elements she enjoyed and others she disdained; overall I'd say she was disappointed with the choice. 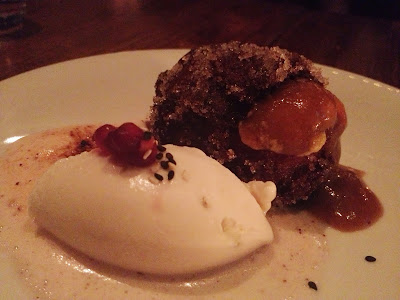 Who could blame her?  She could do nothing but watch the rest of us with envy, as we EACH ordered the chocolate uber chunk: pretzel-peanut crust, malt custard, stout ice cream!!!! 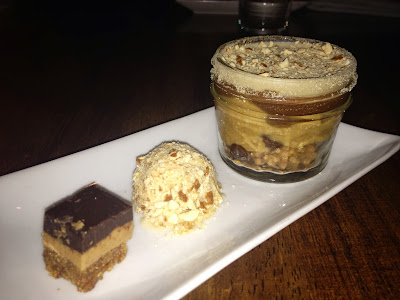 I was the only non-beer fan who ordered this dessert, yet the only one who enjoyed the stout ice cream.   I horrified the haters when I put it directly on my sweet and salty parfait. 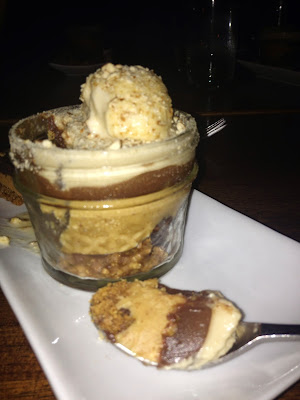 The petit-four was ok, but the contents of the jar was the star of the assortment.  If you're a professional, like me, you'll be able to scoop up the pretzel crust, chocolate chips, and all three layers of cream in one spoonful.  We each took turns saying, "I'm so glad we didn't share." 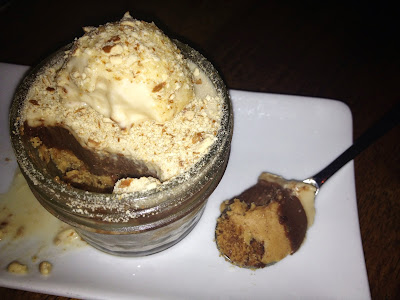 The dining experience was a long one, but I was more than a bit sad when it was over.  Our waiter handled our disjointed group with aplomb, and every element of the service was top-notch. 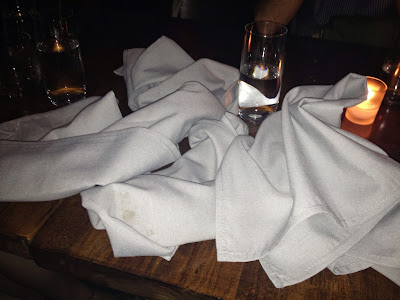 I highly recommend that you visit Vedge for the first time with at least a few people; this way you'll get to try a lot of different things.  I'd also suggest that you keep a menu at your table for reference; although each dish is presented formally, there were a few occasions where we found ourselves trying to remember a particular element.

At one point in the evening Chef Rich Landau walked through the dining room; I wanted to burst into applause, but I seemed to have been the only one who'd noticed.  Also, my mouth was full of uber-chunk- which, incidentally, could wind up a nick-name. 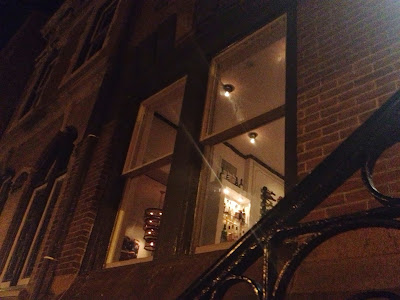 I would not hesitate to return to Vedge and look forward to doing so sooner rather than later: hopefully for a very happy occasion.  Until next time. 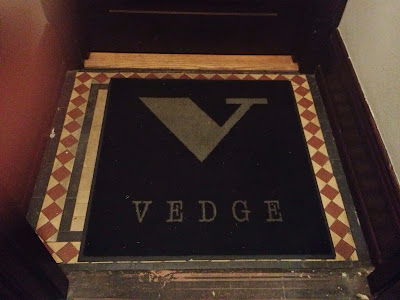 One more thing: I'm a sucker for FAQs, so I couldn't resist reading Vedge's.  This note on their "child-friendliness" caught my attention:

"Child-Friendly It depends on the child. We have no special menus or seating, but well-behaved children of all ages are always welcome."

I've heard that Vedge gets a lot of flack for this, but I think it's clear and fair.  I wouldn't want to be seated next to an unruly person of any age.
Posted by Abby Bean at 9:13 AM