My Day at the Long Island Animal Rights and Vegfest

Because I'm vegan, because I adore the Bethlehem Vegfest, because I have a love/hate relationship with the NYC Vegetarian Food Festival, but mostly because I'm from Long Island, I was super psyched to attend the Long Island Animal Rights and Vegfest hosted by Karuna for Animals. 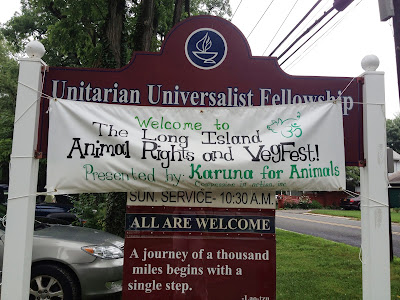 So into Long Island I went, not even stopping to catch this illegal photo of what is possibly the world's most expensive toll bridge. 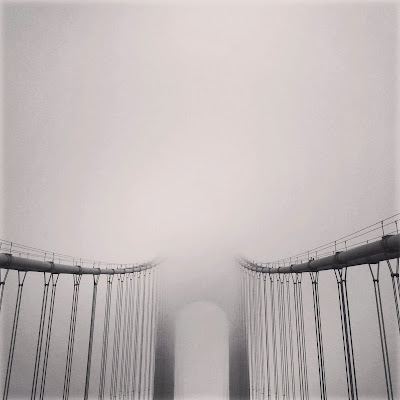 I arrived quicker than expected, so I busied myself with a tour of my childhood neighborhood.  So many memories...the bushes that I used to fling myself into in order to "brake" on my bicycle (I wasn't very good at the backwards pedal) as I took the corners too fast around the block were still there and had grown in proportion to my own expansion.  In other words, they'd still get the job done.

Eventually I tore myself away from Memory Lane and found my way to the event site.  Tents were set up on the gravelly and grassy area outside of the Unitarian Universalist Fellowship, which was unfortunately very muddy from the week's rainstorms.  There were only about ten parking spaces available on site, so a school parking lot a short way down the road was the way to go (as long as you were careful to stay in the narrow shoulder on your walk back). 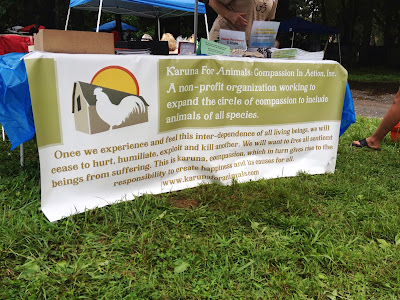 There was a nominal entrance fee required, I signed up for the Karuna email list, and then I was in (apparently by signing up for the email list I was also entered in a raffle for a door prize.  Marty from Marty's Flying Vegan Review later informed me that I'd won, but you had to be there to claim your prize.  No word on what it was, so no way to know what I'm missing!). 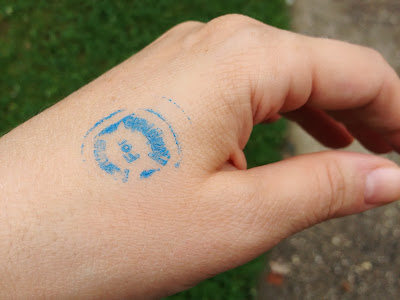 Although the event was much smaller than I'd anticipated, it was an informational haven for curious folks new to the vegan lifestyle and a compassionate way of thinking, as there were many tables set up with free pamphlets: Mercy for Animals, Compassion Over Killing, and Sea Shepard to name a few.  One was new to me: HEART, a non-profit whose mission is "to foster compassion and respect for all living beings and the environment by educating youth and teachers in Humane Education".  I was glad to have had the opportunity to find out more about them from the friendly and enthusiastic representatives; check out all of the cool things they do and consider supporting them in their efforts. 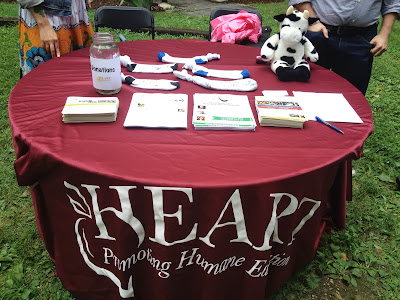 Before the speakers began, there was some really enjoyable live music. 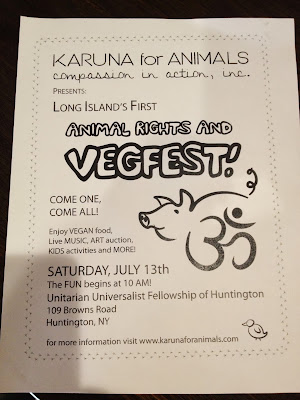 There were also some local business people tabling: life coaching, cooking classes, and pet mediums were all represented.  A couple of tables had homemade snacks: one woman was selling jam thumbprint cookies and another had containers filled with strawberries, walnuts, and maple syrup.  Save hemp chocolate bars, there didn't seem to be any mainstream, vegan, packaged products for sale or sample, but there were a few familiar bakers with an assortment of goodies available.

One of the main reasons I'd attended was to visit La Pirata Kitchen, purveyors of the best vegan Linzer tarts.  I was lucky to have had the opportunity to meet the baker herself, along with another gentleman: both were as pleasant as their cookies! 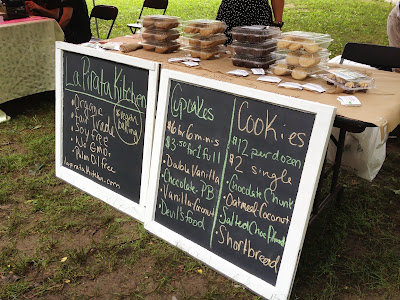 I chose two with a promise to return once I'd eaten them and decided where to go from there. 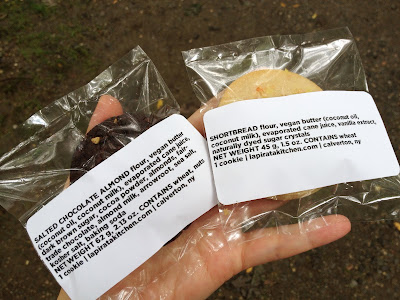 I want to point out that I'd been cleansing all week, so when I finished this fudgy, decadent, salted chocolate almond cookie, my heart was racing from the caffeine!  It was worth it. 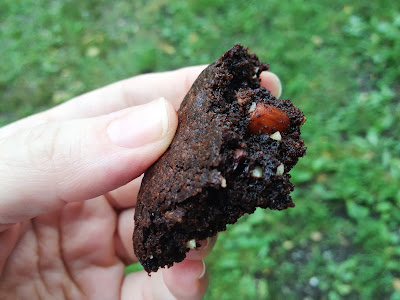 This shortbread was another story altogether. 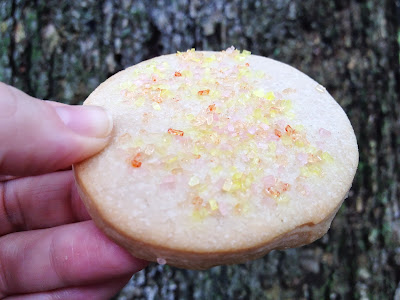 Simple, sweet, authentic: I loved the touch of the naturally died crystals. 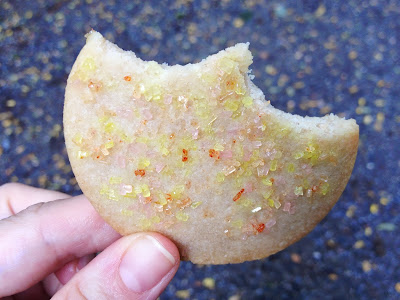 I returned to buy a couple of the amazing shortbread cookies for the dog sitters (a.k.a. The Esteemed Tasting Panel), but La Pirata had sold out of the individually wrapped gems.  What's a girl to do?  I had no choice but to buy a boxfull. 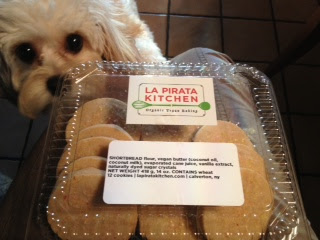 I'd recently read about Michelle Leon's creations, so was happy to see the jewelry and finely crafted, high-end belts and handbags in person.  I especially like the animal buckles, also echoed on some of the handbags. 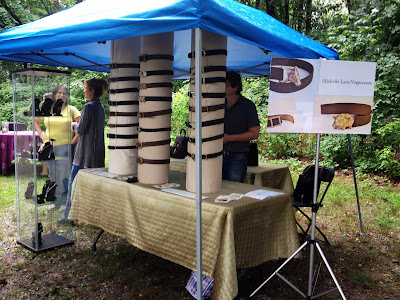 At this point I'd visited all of the tables at least twice, so I intended to go inside the building to view the art on auction.  Unfortunately, I was told that the art was only viewable from 10:00am - 12:00noon, and again from 2:00pm - 6pm.  Instead, I made my way over to the speakers' area and listened to Victoria Moran for a bit; she gave a great spiel on the misconceptions of protein deficiency.  Jenny Brown, who I've had the pleasure of hearing speak before, was next on the schedule.  Unfortunately, this is when the threat of rain became a reality; I ran to my car for refuge.

I was really looking forward to hearing Demosthenes Maratos, particularly after having read his guest post on the My Face is on Fire blog, but he wasn't scheduled to speak for another two hours.  It was still going to be well over an hour until the art was on view again, as well as when Jay Astafa of 3 Brothers Pizza was expected to arrive with the event's sole food option.  The whole timing situation was a bit unusual, so- after some contemplation, I decided to leave the event and head straight to the source.  To be continued...
Posted by Abby Bean at 7:42 AM