From Seed to Sprout, Avon-by-the-Sea

A vegan co-worker sent me a link to a new, vegan restaurant's menu a few weeks ago and, before I knew it, a bunch of Jersey people were talking about From Seed to Sprout in Avon-by-the-Sea.  I couldn't wait to go. 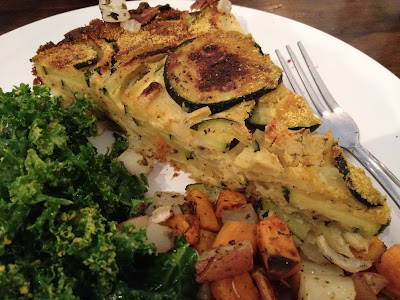 Although there have been no green smoothies involved, VM has also been eating more healthfully of late.  Since we didn't want to lose our momentum, instead of getting cake, we decided to check out the new place for brunch on a rainy weekend. 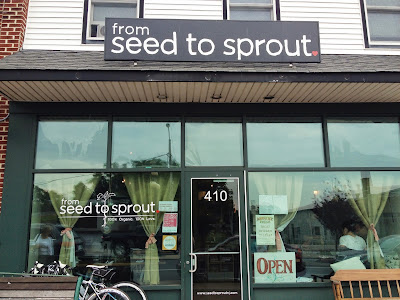 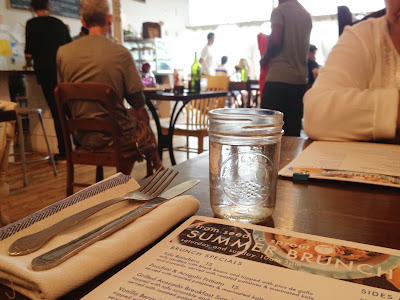 Since my own unfortunate frittata, I've been wanting to try a good one.  Not surprisingly, the zucchini & arugula frittata: served with roasted potatoes & marinated kale put mine to shame.   The large slice was impressive both in size and presentation: just look at those well-placed zucchini slices.  It managed to be both firm and creamy, cheesy and fresh: wholly satiating. 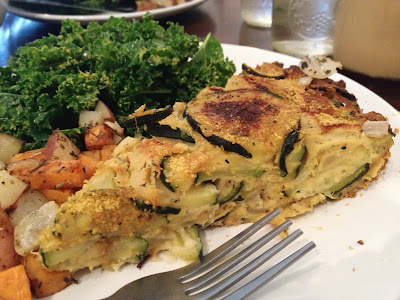 The kale was lightly dressed and well-massaged: the prominent flavor being nooch.  My only disappointment was the roasted potatoes, which seemed slightly undercooked and in need of a bit of salt and pepper. 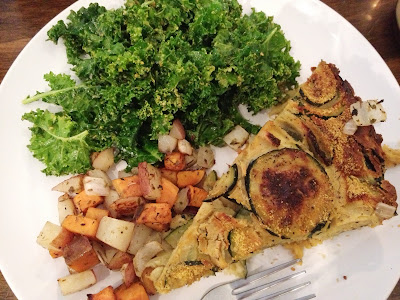 VM ordered the grilled avocado sandwich: on sprouted grain bread with arugula, tomato, and carmelized onion; served with marinated kale salad.  I admit I was superbly jealous when it arrived at the table; who wouldn't have been? 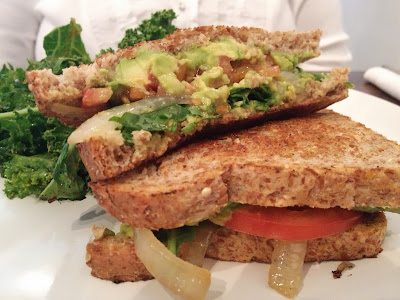 She really enjoyed it, although she too mentioned a little salt and pepper would have gone a long way.  Despite being a huge fan of noochy popcorn, she did not like the salad.  I guess she's spoiled by mine. 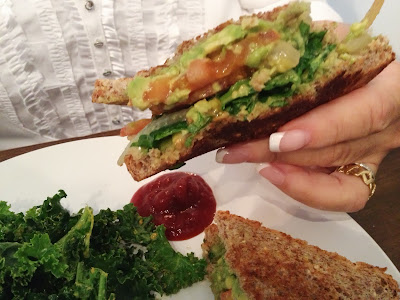 From Seed to Sprout does not serve caffeinated beverages, so VM ordered a Sweet & Dandy iced "coffee", I an iced mate latte.  VM's was pleasantly flavored, but the thick milk (cashew?) was not for her.  Once the ice diluted it a bit I drank about half, but that was enough for me as well.  I had not expected that my latte would have been made with the smoky variety of mate, so it was not my speed either. 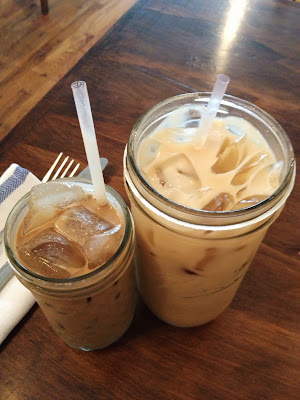 The waitress was kind enough to have brought me a generous serving of agave to mask the flavor with sweetness, but it still just wasn't for me. 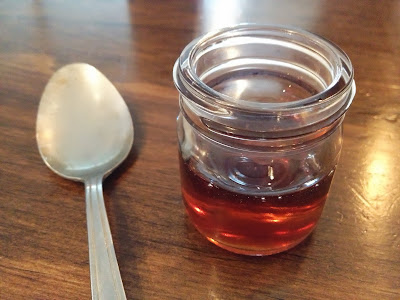 We decided to bring a few dessert items home for review by the Esteemed Tasting Panel. 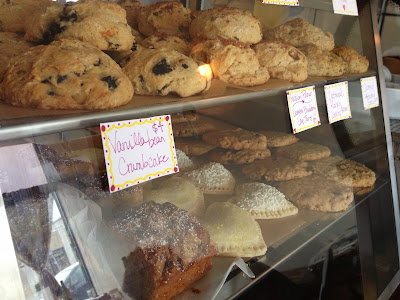 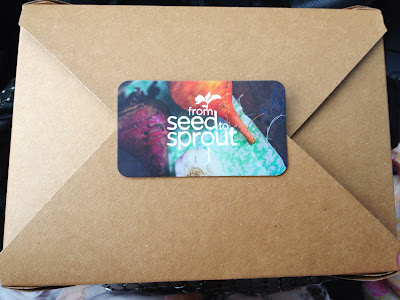 The lemon blueberry scone was filled with fresh blueberries and just a kiss of lemon.  I would have preferred it to be more of a crunchy, dry scone; it was a little too soft for my taste. 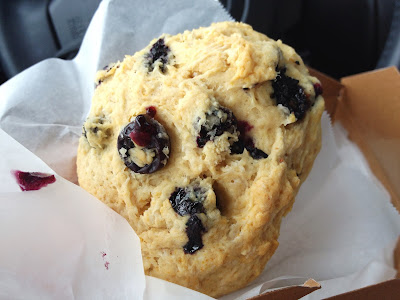 The almond coconut cookie also boasted delicious flavors, but it too could have benefited from being more of a crisp cookie.  I expected it to snap when I broke it, but instead it just bent until it gave. 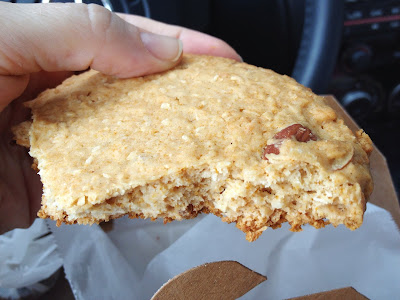 The lemon-blueberry tart got extra credit right off the bat for being adorable.  Also, sprinkles! 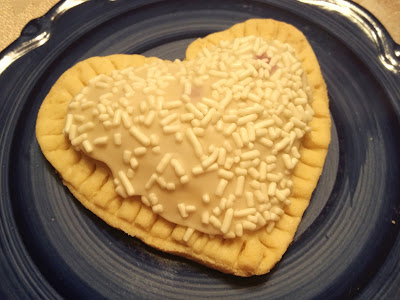 It tasted like the fresh version of a pop-tart, but again- the dough tasted a little too soft. 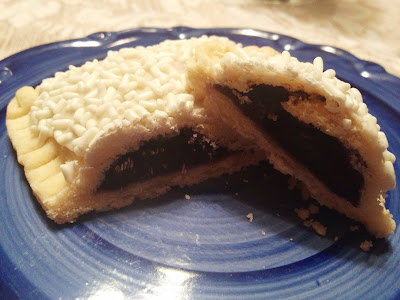 Unfortunately, no one enjoyed the raw chocolate amaretto macaroon; it had an extremely strong and unpleasant taste that was reminiscent of neither chocolate or amaretto. 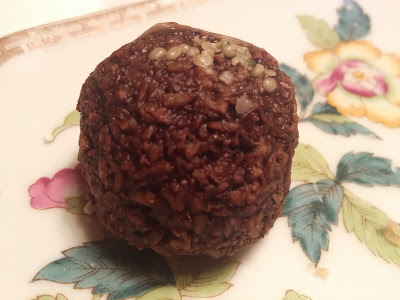 From Seed to Sprout is a little out of the way for us to visit on a regular basis, but I wouldn't hesitate to return for a meal if I found myself near the area. 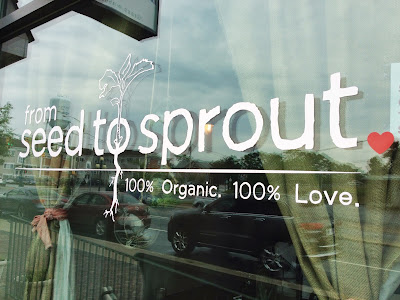 Their mission, to be a "Vegan eatery and juice & smoothie bar specializing in healthy, whole and simple foods." is impressive and admirable.  Everything is made with whole foods & 100% organic ingredients; 100% vegan and preservative free. 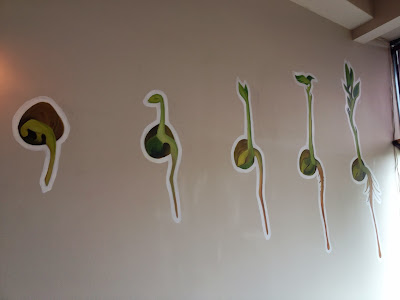 You will surely be in good company (the significantly-sized dining room was almost full at 10:30am) at From Seed to Sprout and certainly will not leave under-nourished. 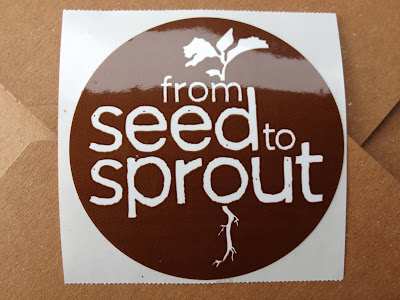 Email ThisBlogThis!Share to TwitterShare to FacebookShare to Pinterest
Labels: Esteemed Tasting Panel, From Seed to Sprout