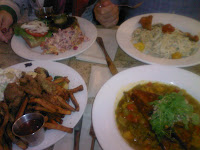 I am a big fan of Café Blossom’s brunch and goodies: berry pancakes, French toast, chocolate chip cookies drizzled with extra chocolate, banana chocolate chip muffins, chocolate peanut butter shakes, etc. The tofu scramble I spy at other tables always looks incredible, but I can’t help but order the sweet stuff…they even give me all the maple syrup I need to drench my breakfast-- without any judgmental sneers (I use a lot of syrup; even at home sneers come with the territory). But after visiting Blossom in Chelsea and thoroughly enjoying all of the “real” food I knew I had to do the same at Café. So, I grabbed me an enthusiastic vegetarian and a grumpy carnie and made them promise me that we were ALL going to partake in real grub…and we did.

Appetizers
Cornmeal crusted oyster mushrooms: big, meaty mushrooms deliciously breaded and fried, then served with a tasty, mustardy sauce. The carnie was especially all over this one and even stated that he would “order it next time”, stunning the vegetarian and I into silence.

Caesar Salad: generous portion with just the right amount of tasty Caesar dressing, sprinkled with gomashio and served with crouton-esque crostini. Initially frightened by the gomashio because he heard the waiter’s description containing sesame seeds and thought I was trying to get him to eat vegan furikake again, the carnie ultimately enjoyed the salad as well. I will note that although I’ve never eaten carnivorous Caesar salad, I would imagine the furikake might make a nice addition in lieu of the little fishies. Just sayin’. The vegetarian didn’t partake in this one because she too is afraid of furikake (!), as she avoids analogs of any kind (if furikake counts as an analog simply because it “tastes fishy”).

Black eyed pea & potato cakes: The vegetarian and I cannot go into either Blossom without ordering this tasty appetizer. In Blossom it’s served as a giant crispy cake with a hint of Indian seasoning, but in Café Blossom it’s served as a couple of smaller, softer cakes. Both versions come with a scrumptious dollop of chipotle aioli and are equally good in their own way.

Dinner
I went for the Morrocan tempeh and it did not disappoint. There were so many textures and flavors going on that for a minute I thought I was in Horizons. It was truly exquisite and so too were the reheated leftovers the next day.

The vegetarian’s veggie grain burger was very good, but I was a little disappointed that it was served on toast (menu said bun). Also, it was an 8 on the mushy veggie burger scale: one being the perfect consistency of a Sunshine Burger and 10 being Candle 79’s ridiculously squishy black bean burger. She loved it, though, and the cole slaw was fresh, crisp, purple and out of this world. Note: the cole slaw did not fare so well as leftovers; eat this all at first sitting.

Finally, the carnie went for the fettucini alfredo. It was a huge bowl of what he tells me was authentic fettucini, filled with tons of portabello mushrooms and topped with a few strips of chicken cutlet and different colored cherry tomatoes. It was a little less creamy than I expected after enjoying the ravioli in cashew cream appetizer at Blossom, but he seemed to really enjoy.

Sides
Because we couldn’t stuff enough into our fat faces, we also had to do the 4 sides for $18 combo. I realize that some people do this as a dinner replacement: combining veggies and a grain, so don’t judge us. We went for the potato salad, French fries, Cajun sweet potato fries…and the brussel sprouts (we ran out of potato options). The potato salad was as fresh and delicious as the cole slaw, the fries were good, the sweet potato fries not nearly as spicy as I would have liked, and the sprouts were good but not anywhere as good as my Mom’s.

Dessert
I initially thought I wouldn’t be able to squeeze in dessert, but there’s always room for a chocolate chip cookie and a hot chocolate. The cookie was a big, yummy sucker and the hot chocolate was good, but no where near the epitome of hot chocolates: Candle 79’s version.

Overall, it was another fine meal and evening at Café Blossom and I’m glad I gave the real food a try because it was great. The phyllo roulade dinner at Blossom is still my favorite, but I’d definitely come back to the Café to try out their bacon cheeseburger now that I hear they are using Daiya.

My only complaint is that the manager was a bit flaky about my Woodstock Farm Sanctuary member discount. I use it all the time, yet he tackily sent the waiter back to the table to question me about it. Not cool. Considering Blossom’s usual warm and enthusiastic handling of the discount, I emailed them about this slip-up and received no response. Very disappointing and even less cool; I hope they work this out.
Posted by Abby Bean at 5:45 PM